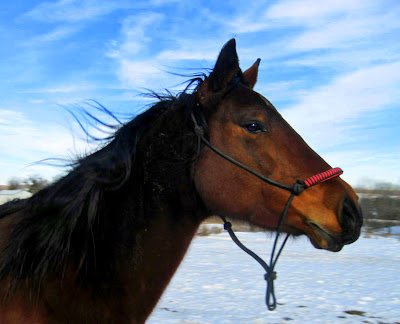 It started out a very cold four degrees this morning. Sunny, but did I mention it was FOUR degrees? I work at home on Friday mornings and because it was FOUR degrees, slipped on my fleece riding pants and a sweatshirt. That's the cool thing about working at home - no dress code.

I usually get off at noon on Friday but had some things to finish up and before I knew it, it was 2:30. The weather bug on my computer finally hit 20 degrees. A heat wave! There was no wind. The sun was still shining. I put on another layer of clothes and headed for the barn. 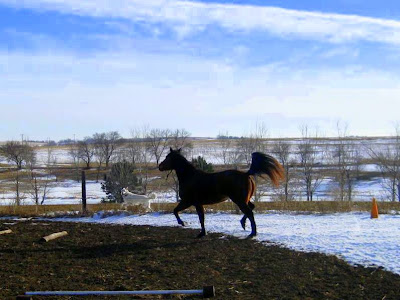 After slipping off her blanket, I turned Windy loose in the arena to let her run or roll or both. Half the arena is snow packed, the other have frozen and dry. She did her best Arabian imitation; her tail flagged as she snorted and pranced. All I could think of was, "there is no way I can have her ready for Expo in six weeks". Ah, but I'll save that worry for another day. 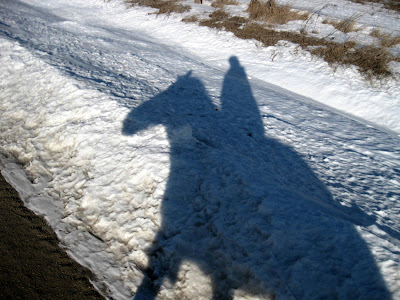 I snapped the lead on and tied her to the hitching post. After a quick brushing, I saddled my mare and together with the dogs, we took off down our country road for a quick five mile ride. Putting on those fleece riding pants this morning must have been a good sign. It felt good to be back in the saddle again.
- January 29, 2010