This coming week, the Sunday Stills challenge asks us to post our two best photos of 2009. I know without a doubt what will be my first choice, but still pondering the other. Check back on Sunday for the results.

While perusing my picture inventory, I started pulling out other favorites. I take thousands of photos. At times, I concentrate really hard to get that truly good shot, but most of the time, I am just snapping away and get lucky. That doesn't necessarily mean that are photography quality, but just that I like them. That I can feel the moment.

So I started pulling some of those lucky shots to share with you. And boy, there were more than I thought! So rather than put a few dozen pictures on one post, I'll make "Lucky Shots" a regular "filler", posting when there is nothing else to post about except the weather (to which I am getting sick to death of posting about!) 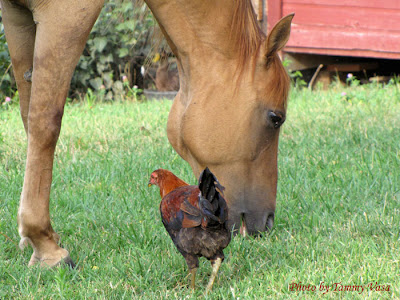 Butterscotch and the Hen: I had the horses out grazing in the yard this past summer and the chickens were following them around. The poultry seem to find a never ending supply of bugs around their equine friends. On this particular day, the black chicken was following Blue, the red chicken was following Ginger and this "red dun" colored chicken was following Butter. I found it interesting that they were all color coordinated. Coincidence, no doubt. But I'm easily entertained. I like this photo because when shown in it's larger size, it almost looks 3-D. 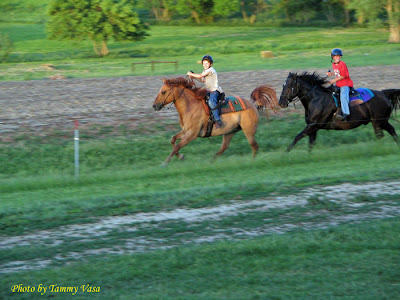 Ah, Glory Days! This picture was taken in 2006. The kids had finally learned to saddle their own horses and ride! They would spend what seemed like hours in this early spring running their horses up and down the pasture road. On this particular day, not long after I shot this picture, McCain hollered at me to come & help him. He had fallen off of Blue coming through a gate and had put his arms out to break his fall. Sure enough, fractured wrist! 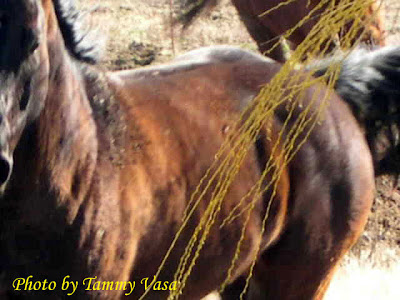 The horse is dirty, the picture kind of out of focus... but still, I liked it. Taken in March of 2004, I had opened up the corrals to let the horses out in the yard to just run! Blue was passing under the weeping willow tree when I took this photo. By this time of year, their winter coats are faded and dingy, just waiting to be brushed out for the spring thaw. My black horse looks brown - and not a pretty brown, either! 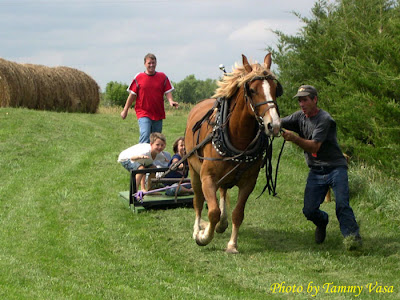 Later that same year, John had Baby fitted for harness and built a skid to teach her to pull. After a trial run or two up the driveway, she was ready for passengers! That is Case and his cousin, Jayden, who is visible. McCain is on there as well. That is my brother following behind. I love the expressions on everyone's faces... the kids', John's and even Baby's. 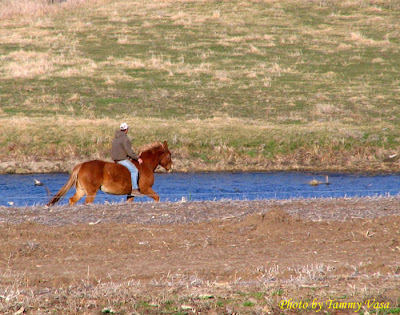 This shot was taken last March. Things were warming up. I can't remember how I twisted John's arm to come ride the pasture with me; perhaps just checking fence. And someone needs to put some time on that draft horse!

I remember not so long ago using my 35mm camera and taking a roll of 24 photos in for developing and being so disappointed in the outcome. Why was it so hard to take good pictures? And as I look through my digital files I find the early pictures weren't much better than those 35mm shots. What I learned is it just takes practice. And a lot of pictures! And a photoshop program for those that need just a little help!
- January 07, 2010