Yep, you guessed it. I can't think of a thing to write about. Other than having a non-horsey dinner with my Horsetales friends, I haven't done a thing horsey so have nothing to report.

Our refurbish project is going slow. We have some paint on the walls, a fixture hung and the rest is still in a state of disrepair. So no horse news. No house news. It's time for Lucky Shots! 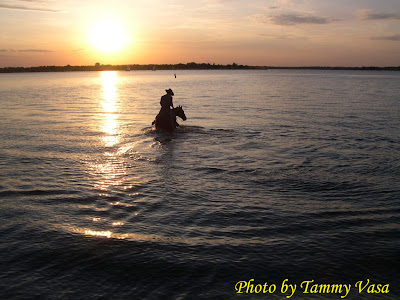 I probably have posted the above photo before. Correction, "award winning" photo! I entered it in the Nebraska Horse Expo photo contest a few years ago and won! And it was truly a lucky shot.

The evening I took this picture, John and I were riding with the Platte River Riders. I started out on Blue and he was getting all nerved up at all the boats and jet skis on the lake and was becoming quite a handful. If I remember correctly, I had just had a cast removed from my ankle and didn't have the strength to ride him out. So we switched and I got on Ginger. Despite not liking boats, Blue loves water. As John took him out into the water, I took my 4 mega pixel Nikon out of my saddle bag and snapped this picture. I never tire of looking at it. 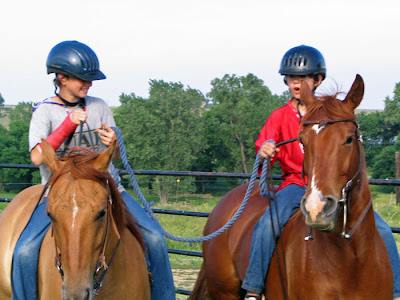 The boys were playing on Butter and Ginger in the round pen. This picture is unusual in the fact that McCain is riding Butter. He never riders Butter. Note the cast on his arm from an earlier accident when he fell from Blue while going thru a gate. No doubt, playing with this rope between the two horses was probably just another accident waiting to happen - but we somehow dodged the bullet that day! (I don't think that loose helmet will help save McCain's head either. Jeesh, who's his mama?) 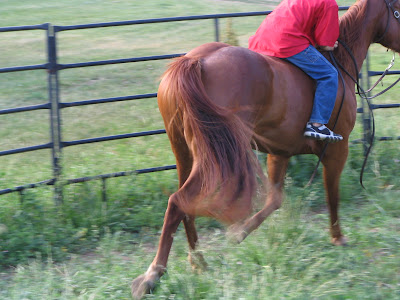 I had the camera on continuous shooting as I sometimes will do when the boys are riding. Although Case is cut off in this picture, I just loved the look of Ginger. You can tell her soft trot, see the sun in her tail. The horse appears to be having as much fun as the child. 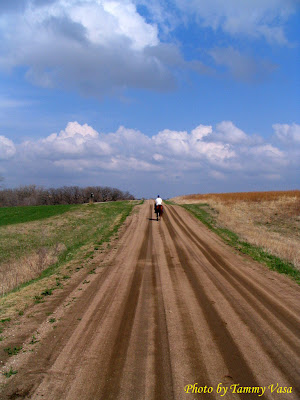 I took this picture last spring on a conditioning ride. As usual, John had rode ahead of me. I liked the contrast between the road and the sky. 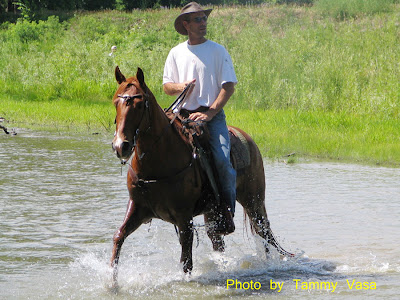 This picture was taken on the river near Fullerton, Nebraska. I was laying in a lawn chair in the water with my friends when "the boys" came riding through. 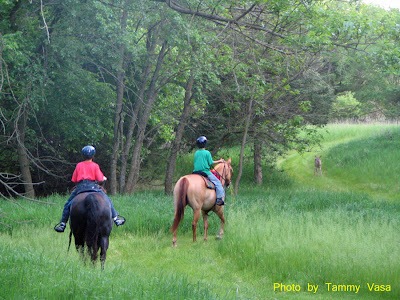 And finally, we were riding at Camp Moses when the boys came upon this deer. It stopped and watched as the kids approached. There is no hunting at Camp Moses and the deer are used to campers and riders. It's amazing how close you can sometimes get before they scurry off.

Do you have some Lucky Shots you would like to share? Consider entering your picture in the photo contest at the Nebraska Horse Expo coming up in March!