As I go through pictures, I really kick myself for not having them developed. (Is "developed" still the right word for digital photos?) I am going to have to make it a point of having them printed. I do have my pictures on this hard drive and an external one; learned that lesson when I lost all of 2007! But when my kids are grown, will we really all gather around the computer and look at pictures? Probably not.

My next set of Lucky Shots are favorites I have taken of Windy. I have more pictures of her than I do of my kids, so I am not surprised a few turned out worthy of being printed some day. 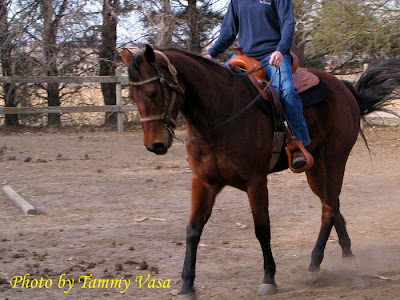 The photo above was taken while she was at the trainer last spring. Brenda was working on getting her to have a more collected lope. Windy doesn't appreciate collection in the least. It's been a struggle for both her and me and I am probably still too lax about asking her for collection. What I liked about this picture is the look on her face and her tail. It says it all. She is not a happy camper, but is trying to oblige. 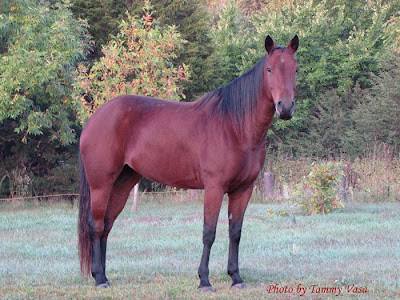 This picture is my "for sale" picture. No, dah! She is not for sale. But if she were, this would make a great shot for an online classified. This was a morning shot taken at Rock Creek Station the last week in September. I thought the trees behind her were so pretty. Her look is familiar as she always perks up when I call her name. 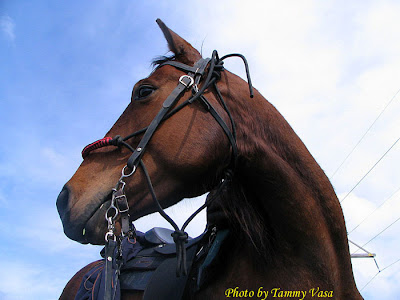 An interesting angle. John and I were out riding our roads last spring. Although we hadn't opened up our pastures yet for the horses, the ditches along the road were greening up. We stopped so the horses could get a taste of it. I was sitting down next to her and something in the distance caught her attention. She looked up and I snapped the picture. 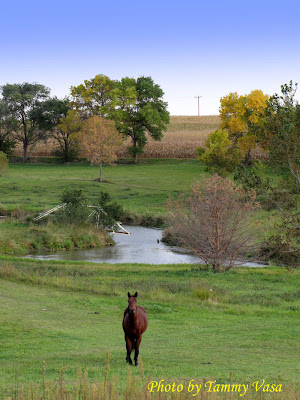 I'd been out taking some pictures in the pasture. I don't think Windy realized I was there until this moment. Again, her ears perked up and she started coming my way. I just liked everything in this picture. If you look closely, it was the change of seasons. Some of the grass is starting to dry up and the leaves are turning. In other shots, you can tell the horses coat is getting thick and more vibrant in color, as well. 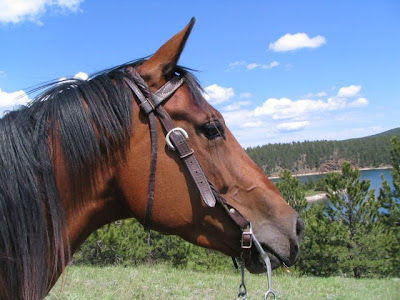 South Dakota. Deerfield Lake. The water, the sky, the horses. We were in paradise that day. I love the look in her eye as she watches a boat on the water. She had raised her head from grazing; you can see the grass still in her mouth. In the larger picture size, her mane is so black, it almost has a blue hue to it. One of my favorite picture! 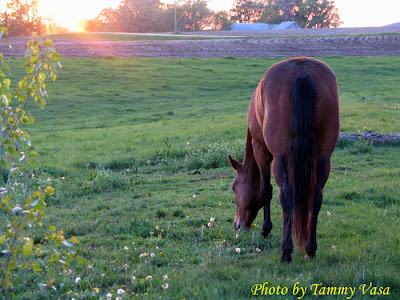 I've always liked this picture, too. It was taken in the spring as the grass was starting to green up. The sun was going down. I think Windy was just 4 or 5 in this picture. She was starting to fill out, looking more like a horse than one just coming of age. 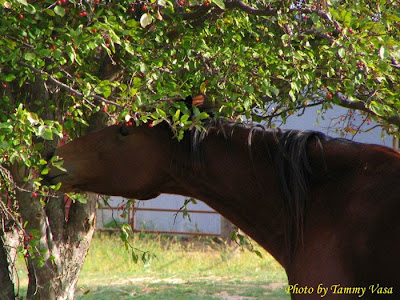 And finally, this one was just a fun shot. I really don't think she is eating the crab apples; perhaps just had her face in the tree to scratch it.

The sun is shining on my back as I type this post. It is suppose to be almost 40 degrees today! As I look out the window, I still see nothing but a blanket of snow. But hopefully, the little break in temperature will start the meltdown! I might even catch some saddle time!

No Sunday Stills for me this week. We are doing a little updating in our house & the office has been temporarily disassembled. Hope to be back on task next week!