Our Sunday Stills challenge for this week seemed pretty easy. To post our best shot of 2009. Right away, I knew what picture that would be. I do have a favorite. But Ed was feeling a bit generous and said we should post our favorite two pictures. Ah jeez! Now that is tough. There are so many that just didn't make the cut of "favorite", but were a close second.

As always, I try to keep my posts horse related. I have a few of Blue that seemed to really capture his personality. But I also think I may have posted them on this blog a time or two. And I have more pictures of Windy than I do of my kids! So I cheated a bit. And started another series of posts called Lucky Shots. There I can showcase those that just didn't quite fall into the "favorite" category, but that make me smile nonetheless.

Here is my all time favorite 2009 Best Shot. 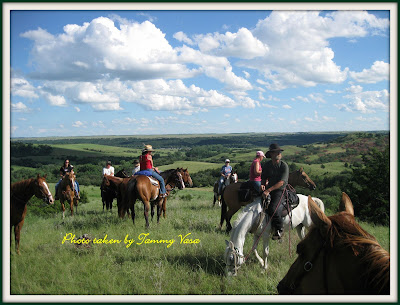 This picture was taken this past June at our ride at Big Canyon Ranch near Basset, Nebraska. It was late in the afternoon and our bunch road out into the east pastures. We started climbing some of the higher hills. Several of us tackled an even bigger hill while the rest of our group rested on this bluff. When I came back down from that climb, I took this picture of the valley which reaches all the way to the Niobrara River. It truly looks like you can see forever. But when I downloaded this picture, what I really appreciated about is were not only the colors, but the other riders. Their expressions or lack thereof. All of them in their own little world, taking in the same beauty that I was seeing through my lens. This is why I trail ride. It just doesn't get any better than this. 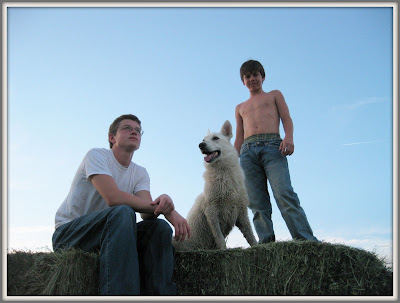 And the second runner up, goes to my boys. Kind of horse related as it was taken when we were putting up hay. Once again, what I like about this picture is how it captured their personalities. McCain is looking away from the camera. He is not avoiding it. He probably has no clue I am taking the picture. He's a dreamer. Nothing bad about that - he takes after me. And I can tell he is caught up in one of his big dreams at this moment. Probably picturing himself doing anything besides putting up hay. And Case, he sees the camera and no doubt, the shot before this and the shot after, he has some sort of funny face happening to try to ruin the picture. And the boxers coming out of the jeans? I have no idea where that look came from! Finally, Ritz, the dog. He is the most obedient dog I ever owned. Just last night I had him doing similar poses on snow drifts. So I tell him to get on the bales for a picture, he gets on the bales. And isn't he photogenic? That dog doesn't take a bad picture! So my boys, all three of them, garner the spot for my second favorite picture of 2009.

I have to give Ed credit - when he offers a challenge, he makes me think not only about just capturing the subject, but taking a good shot. Can't wait to see what our photo assignments are for 2010.