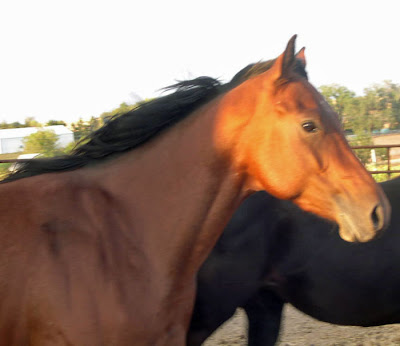 In 2001, Ginger was bred to our friend’s stud and Windy was born the following year. My friend had also bred her own mares to that same stud and also had foals that spring. One of those born to her mare was a bay colt she called Gunner. He looked a lot like Windy; just a bit more of a star and a short sock on his hind foot, where Windy had none. Windy was willowy built and Gunner was stockier. I liked him from the moment I saw him. 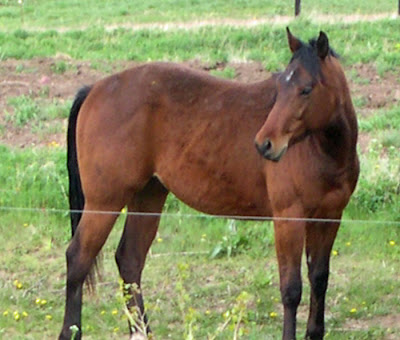 As I mentioned in a prior post, My Dream Horse, I sold Windy as a yearling. One of the many times we downsized and I regretted it the moment I let her go. But later that year, my friend offered me Gunner in exchange for a ½ a side of beef. I certainly didn’t need another horse, but had a weakness for this young colt. So I took the deal. 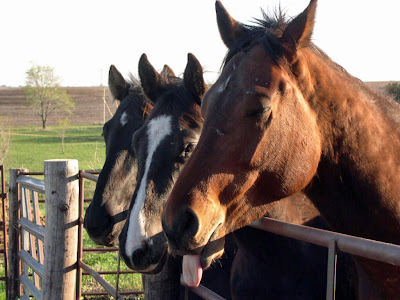 Gunner moved in and was easily accepted by the herd. He didn’t really fall into a pecking order, just squeezed in whether he was invited or not and the other horses were okay with that. He had a likeable personality and was a favorite among humans and equine alike. He was a cross between a class clown and Houdini. We’d often find him on the other side of the fence and as soon as we’d go to fetch him, he’d be back where he should be. To this day, he was the only horse that could do that. 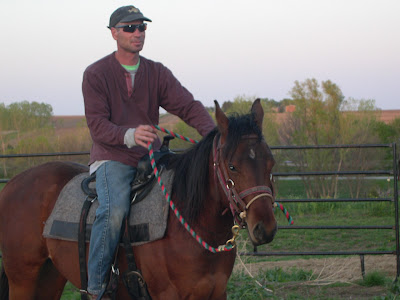 John started him the fall of his two year old year. As we predicted, it was pretty uneventful. He was going to be an easy ride. On Mother's Day the following year, John, the boys and I loaded up and went to a nearby lake. I rode Gunner for the first time that day. Startled only once by a beastly looking culvert, he moseyed along the trail like he did it every day. I was beginning to come to the conclusion that it wasn’t working with my appaloosa gelding and I wondered that day if perhaps Gunner could be “the one.” 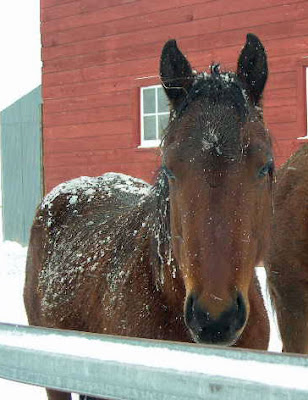 It was now late May, 2005. Looking back, the last 15 months had been pure hell. McCain had broken his femur and laid in traction for a month. We lost John’s dad and after reeling from that, my own mom was diagnosed with pancreatic cancer and died a mere three months later. And now I had broken my ankle just as riding season was about to kick off.

Wrapped in a temporary splint until the swelling could go down enough to cast, I glanced out my home office window. As usual, my attention was focused on the horses, always counting heads. That morning, I found it unusual that Gunner was standing off by himself and even mentioned it to John as he walked by. I went back to what I was doing but a few minutes later, swiveled my chair back to the window. Gunner was still standing alone. A little voice said something was wrong. I asked John to drive me to the pasture.

I hobbled on crutches out to John’s Honda. Tossed my crutches on the seat and settled in. This wasn’t the first time I had broken my ankle, so I knew the drill pretty well. I cautioned John not to hit any bumps. As we got closer to Gunner, I could tell something was terribly wrong. It looked like he’d been shot with an arrow! And as we pulled up next to him, I realized he was impaled by a dead tree branch.

The spring rains came fast that year and a lot of timber washed down the creeks. When the water subsided, it left debris along the edge of our pasture. In my mind, I could see Gunner running down to the pasture and turning the corner quickly and coming in contact with this big dead branch that he didn’t expect to be there. 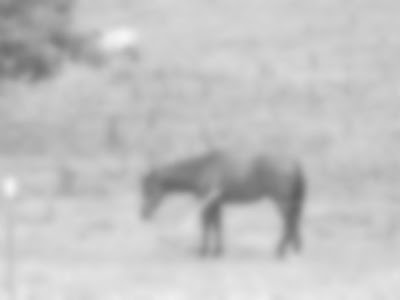 Leaning on my crutches, I waited with Gunner until the vet arrived. I petted him softly as the vet removed the branch. The doctor examined the it and the wound. He sighed and told me the bad news. The branch had penetrated Gunner’s stomach. It was a mortal injury.

Gunner was in shock and his body was starting to shake. John arrived with the trailer and helped me slip a stable blanket on the colt. We lead him to the trailer and he loaded like a trooper. The vet recommended I put him down. But I wasn’t ready yet to let him go. I wanted a second opinion. And a third. He understood and told me to call him when I was ready.

I left Gunner in the trailer as I hobbled to the house. Surely I would find someone to fix him. I emailed the Horsetales group for support as I started to make calls. And all of those who answered, concurred with the prognosis. The doctor who gelded Gunner quietly told me, “I could have him on the table right now, Tammy, and couldn’t save him.” It was over.

I made one more phone call to the treating veterinarian and asked that he come back to put Gunner to sleep. John and I unloaded him and walked him to the barn. John made himself scarce as I sat down in the doorway of the tack room, looking out into the stall. My heart was breaking. I’d wait with Gunner until the vet arrived. But Gunner’s time was up. I watched as he went down. And just like that, he was gone. 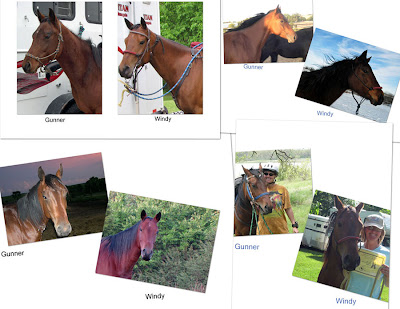 Call it coincidence or opportunity that Windy happened to be for sale shortly after I lost Gunner. There was no doubt I would buy her back. Windy and Gunner were the same age and although they shared the same sire, in the horse world, you don’t call them siblings even though biologically they were. Their personalities were nothing alike but their resemblence was uncanny. As I glance through pictures, I sometimes find myself wondering if it is Windy or Gunner, looking for the white sock to give it away. As I watched Windy mature into a beautiful horse, I can’t help but wonder what Gunner would have been like had he lived? Maybe not as pretty as his sister, but I'm sure he would have been an awesome ride.
- February 05, 2010