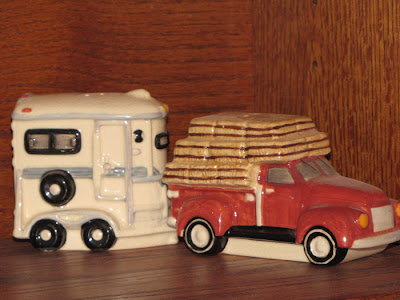 I got nuthin’ to report! That’s the problem with a theme related blog. I ain’t livin’ it right now. My five hay burners are doing nothin’ but bellying up to the bale and wallowing in the mud. But mud is good. It means the temps have been over 32 degrees. Just barely, but we’ll take it. So if you tuned in for a horse report. That’s it. Click on out of here. The rest of the story is not horse related, but its all I got! 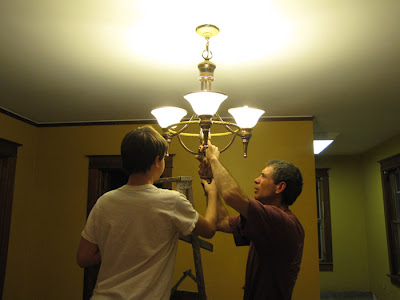 I’m cracking the whip on this construction project. I’ve had enough of dust and chaos and just want it done. If we had a crew of dozen good men, it might be. But John and I continue to trudge along with occasional help from the offspring. So close, so close and yet so far… (Name that song.) I told him I want to be putting the finishing touches on by the end of next weekend. I’m not sure he believed me.

If you recall, the plan was to remove the carpet and refinish the floors in the office, dining room and living room. Then paint those rooms, plus the foyer and the stairwell. We sanded the dining room and office first. The office floor was rough. We decided to replace it with laminate flooring. So that room is done, sans the window coverings. Of all the rooms, I missed my office the most.

The dining room is painted, a new fixture in place and there is one coat of shine on the floor. It’s in a holding pattern. We are sanding the living room floor this weekend. Its walls are done. The foyer and stairwell have been trimmed out and I will roll the paint tomorrow. If all goes as planned, we can start putting more shine on the floor each morning. It will take several coats. 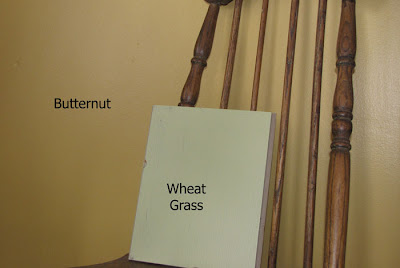 Butternut. The color of the walls in the office and dining room and the world’s toughest color to match for window treatments. I’m looking for “pop”, as they say on HDTV, and nuthin’ is poppin’. After three attempts and returns, the JCPenneys’ lady is pretty sure I picked a winner this time. Of course they didn’t have the size I wanted, so the jury is still out pending the arrival of the UPS truck. 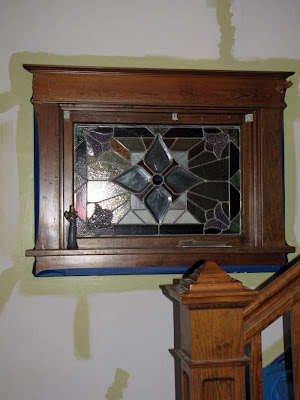 Wheat Grass. It’s such a pretty name for the living room, foyer and stairwell paint. It describes it perfectly. But as my friend Sandy put it – my paint color is a bit of a chameleon. During the day, it is the color of wheat right before its cut. But once the sun sets, the yellow is gone and it is greener than I would have chosen. The HDTV people tell me once the furnishings are back in place and curtains up, the color doesn't play such a big role. I'm hoping that will be the case and it will tone down a bit. 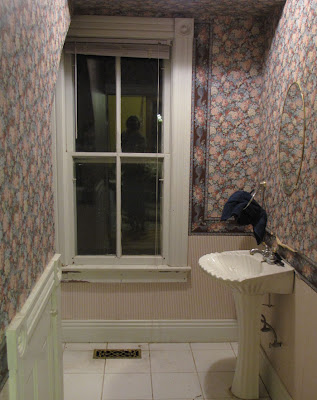 The Half Bath. It wasn’t in the plan but as long as I'm tearing apart rooms, it made the hit list. I think I must have thought when I put up the (horrendous) floral wallpaper circa 1996 that I would have won the lottery by now and someone else would have to remove it. The ticket never came in and that someone was McCain and me. And Oh My Gosh, warning to all women who have boys or are pregnant and could have a boy or might in the future. Do Not Put In White Tile! This room is being refloored with a wood look laminate. The wall color is pending.

Mississippi Mud. The new color for McCain’s bedroom walls. I made the mistake of taking him to the Home Depot with me today and he decided to join the remodeling fun. Oh happy day! 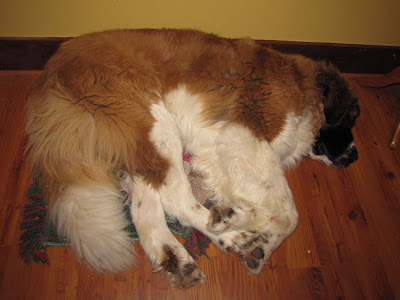 Big Dog Little Rug. The dogs aren't sure they care for not having wall to wall carpeting. I think I need to get some bigger rugs!