A Ride Down Memory Lane 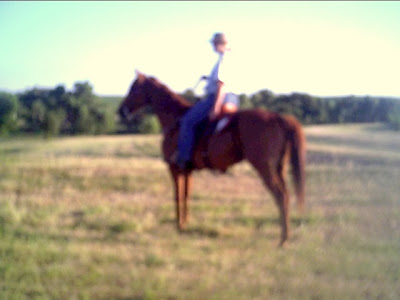 In 2003, we owned a thoroughbred for a brief time. A 12-year-old off-the-track thoroughbred named U R Nice. “Nick” was supposedly retrained for trail riding and barrel racing but no one was using him for either activity. John bought him for all the reasons I didn’t think we should. He was flashy and fast. And tall. John already had Ginger that fit the flashy and fast bill. He certainly didn’t need another one.

I get “new horse fever”, too, and didn’t put up much of a fight about buying UR Nice. The boys were riding the horses I had bought for myself and although “fast” and “tall” were not necessarily traits in a horse I was looking for, I have always been fond of thoroughbreds. Despite harboring deep riding fears, I started riding Nick that spring.

From the day we picked him up, Nick was never easy to load. Even in our big 4-horse trailer, he wouldn’t go in first, middle or last. He just plain wouldn’t go in. So anytime we took him anywhere, John had to run his repel rope through the inside trailer ties and “pulley” him in. And it usually wasn’t very pretty or easy. But it worked. When it came time to come home, we’d make sure no one was looking and go through the same process. Once when he was loaded, he got his front hooves stuck in the mangers. I recall wondering “how in the heck did he do that?” and thinking “now what in the heck do we do about this?” I don’t recall how we freed him, but he came out of it no worse for the wear.

As summer approached that year, I decided we were going on our first big organized trail ride. I don’t remember if I knew there would be close to two hundred riders when I made this decision or if that part was a surprise to us when we got there. All I know is I could now write a book titled “What Not To Do On Your First Big Trail Ride.” Our experience definitely falls under the “live and learn” category with an emphasis on “live”.

When preparing for the ride, I made the following (what turned out to be pea-brained) decisions:
(Strike) 1: I would ride Nick
(Strike) 2: John could take our young 3-year-old gelding, Bo.
(Strike) 3: The kids can ride Blue & Mikey! Won’t they have fun!

I learned quickly that a ride such as this is no place for young kids, who were 6 and 9 years old at the time. My only consolation was they were riding good horses because we quickly found out that John and I would be no help at all to them should they need it!

The morning of the ride, we headed out toward the end of the group. Things were going pretty well, all things considered. The kids’ horses were good, Bo seemed pretty level and Nick was causing me no grief. The feeling of ease quickly ended when a buckboard pulled by drafts or mules (or both) came up behind us.

Nick heard the chains before we saw the wagon. He started to spin. And dance and hop and shake and sidepass. And then he hit reverse. He backed and backed and backed! He backed away from the buckboard. He backed away from our group. He backed with no regard to what was behind him and he backed into a barbwire fence. Even with blood running down his butt cheek, he still tried to escape the terror while too scared to turn his back to it. Only grateful that he backed instead of bolted, I dismounted and did the only thing I could do. I traded horses with John. 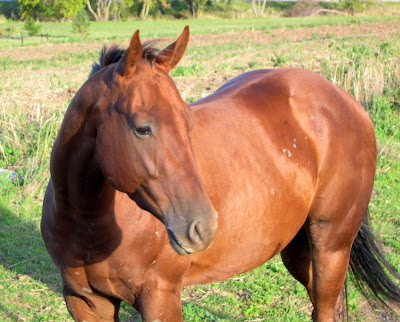 I bought Bo as a yearling at the Sutton sale. He was a solid chestnut with no white. Halter bred on the top, race bred quarter horse on the bottom side. He was as pretty as a copper penny. He bucked hard the first time he was saddled as a late two year old, but since then, had settled in pretty well. Although he had no real trail rides on his resume, so to speak, I wasn’t overly concerned about riding him. Unfortunately, the more John worked with Crazy Nick who now seemed to be a Kentucky Derby wannabe; I believe Bo was starting to feel the stress of that plus the two hundred riders. So he started to buck. Not with a lot of gumption, but enough to unnerve me a little more. I felt like I’d gone out of the frying pan and into the fire.

It seemed like it took forever for the team to pass us. We hung back until it was out of view. Nick got his wits about himself and Bo settled down somewhat, so John and I traded horses once more. We had a pretty nice ride…. For about 20 minutes.

Our plan was to stay at the back of the ride. There were just a handful of people further behind us and then the safety riders. Not much time had passed when we heard some commotion and saw that a rider behind us had been thrown from his or her horse. Broken bones were involved. The safety riders radioed ahead to stop the ride and requested transport for the rider. You guessed it. Bring back the buckboard! Ah, jeez….

We needed to leave the scene of the accident. Get the heck out of Dodge. Now! We slowly made our way around the waiting horses and started to ascend a hill off to the side of the trail when Nick saw them. He put on his brakes and started to back down the hill. There were people at the bottom; there was a creek at the bottom. We were NOT going down. In my best effort to change his mind, I whacked him on the butt with the reins. In his best effort to free himself of me, he reared straight up on the incline of that hill. As I fell to the side, I saw all 16 hands of that chestnut horse coming down with me.

Nick landed on his side with my right leg and hip under him. Luckily, he didn’t have the momentum to go on over me, but instead got up and high-tailed it out of there. I met John’s eyes. He quickly turned his attention away from me and took off on his colt in hot pursuit of the racehorse while two men whom I never met before, tended to me.

“Don’t move,” they told me as they pulled ice and Advil out of their saddlebags. Really, I could move and was more embarrassed to be lying there on the ground in front of two hundred riders. And God forbid someone call for the buckboard. So after I convinced them nothing was broken, with their help, I pulled myself up just as John rode back with the steed in hand.

I was always told “If you fall off, get back on!” (Yeah, like this wild-eyed horse was going to acknowledge my moxy.) I climbed back on, but in my heart and head, I was done with him. Then and always. After a short ride, I told John I would take my chances with the colt. John got back on Nick and I settled in on Bo. He felt strong and steady like a quarter horse should and a welcome relief despite his youth. There was no bucking this time. And the four of us headed quietly down the trail.

Shortly after the ride started moving again, the skies opened up and the rain began to pour. We put on our slickers and we rode on. My hip was throbbing and the kids were whining and we rode on. We were going so slowly, the safety riders finally gave up on us and passed us by. But we rode on. We finished that damn ride on the young colt and the racehorse.

I sold Nick not long after that ride. It must have been a good sign when he loaded like a pro in his new owner’s two-horse trailer. We kept in touch for awhile. It was a good match.

Most of the time if asked “Did you have a good ride?” I smile and say “Yes, the best!” and even when it wasn’t necessarily the easiest ride, anytime on a horse is a the best time for me. There were good things about this ride – the kids taking care of themselves and their horses taking care of them when John and I had no control whatsoever. The people who helped us along the way; friends I met on that ride who are still friends today. In that respect, the worst ride of my life was still a good ride.

I’ve grown a lot as a horseperson in the seven years that have passed. From how NOT to load a horse to how to best set myself up for success. Had I known then what I know now, Nick may have been my dream horse. I think of him as the one who got away. Bo, too, for that matter, as he sold the next year. I guess it wasn’t meant to be.

Email ThisBlogThis!Share to TwitterShare to FacebookShare to Pinterest
Labels: My Herd, Trail Rides