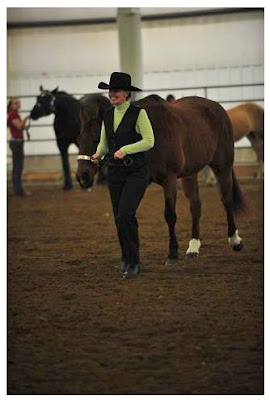 The Mane Challenge has become a fan favorite at the Nebraska Horse Expo. It's open to any group of two to 4 horses who wish to form a team. Within the team, each horse/rider must compete in a minimum of 2 of the 5 events to demonstrate versatility of that particular horse. Each team may not have more than 2 horses in each event. Clear as mud? Actually, it’s not so complicated.

I participated on the Shoofly Pet Sitting team with my friends, Robyn on her horse, Coda and Jess with Cutter. Originally, I had planned to ride Windy and compete in Showmanship and the speed event. I’ve never shown Windy before and my worry was getting her to set-up correctly for Showmanship. The weather did not give me any breaks to get her ready. So I borrowed Joni's horse, Prinny, instead. A few weeks before Expo, we re-evaluated the horses we had on our team and changed my events to Trail, Western Pleasure and Showmanship.

Ali Johnson, Prinny’s usual girl, was my “horse show Mom”. We practiced showmanship as we waited in line to bathe Prinny. On Friday morning, we got some arena time to practice western pleasure. Prinny knew what he was doing. It was me who needed to learn the right buttons to press. I’m sure 21-year-old Prinny was thinking to himself “here we go again – another amateur!”

Showmanship was the first event on Friday. There were 22 participants in the class. Ali advised me to try to show in the first dozen. Other “moms” coached me from the sidelines. “Stay away from those cones,” they warned. Especially when pivoting. 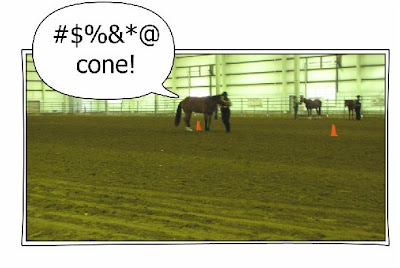 My turn came. Walk to cone 1. Trot to cone 2. Pivot at cone 3. I swore I had given myself enough room for the pivot. But no! As we circled around, there was that damn cone underneath us! I kept a smile on my face as the voice in my head said “Oh, sh….!” Luckily neither Prinny nor I touched the cone.

We proceeded to the judge & then were asked to back up 5 steps and then stop and set-up. Prinny was perfect, as usual. The judge did her 15 second look/see as I followed her around the horse in exaggerated steps. It reminded me a little of when I was on the drill team. I kept wanting to point one toe in a pose when I stopped, but I didn’t. After being dismissed, we lined up with the other participants along the rail and waited until all entries were shown.

The judge made one more pass by our horses. As part of Showmanship, we followed the judge, changing sides as she passed, huge smiles in place and butterflies in my stomach. Six horses would place in this event. We waited patiently as the judge passed the results to the announcer.

I wasn't sure if the winners would be called first or if they would dismiss those who didn't place. Then it dawned on me that I didn't even know what my number was! I asked the girl next to me to read the number on my back. It was #139. 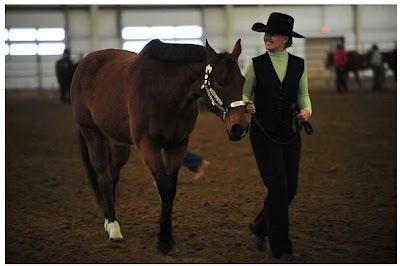 The announcer then said that he would read the numbers of those who placed, beginning with 6th place. Okay, good. Now I knew. And the next thing I heard was: “Sixth place goes to #139." Oh my God, that was us! Prinny and me! Number 139!