The Horses are Loose! 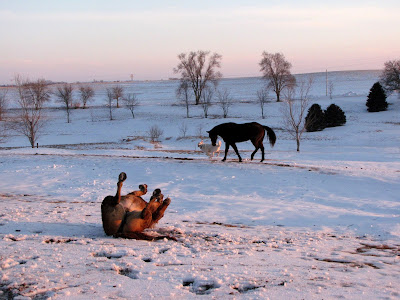 The snow has started to thaw pretty well. Although the pasture is still snow covered for the most part, the corrals are getting muddy. There was about an hour of daylight left when I got home yesterday. I thought I would give the horses a break and let them stretch their legs in the pasture for a few minutes. I wasn’t worried about bringing them back in again. They know the sound of the grain can.

They trotted out when I opened the gate but even though Ritz was right on their heels urging them on, they never really took off like I thought they might. They would charge at the dog occasionally, but mostly they ignored him as they rolled and pawed for grass. Really, I was quite disappointed they hadn’t given me any show for good picture opportunities. Three of them had even gone back into the corral. 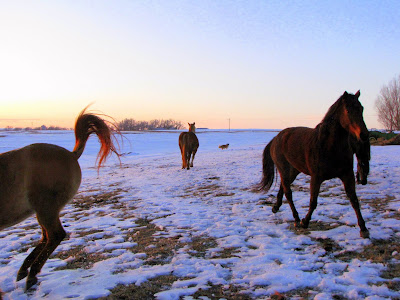 Windy and Butter were still in the pasture near the corral gate as I made my way around the barn to help John with the calves. I was well aware that about 10 foot of fence on the other side of this 10 acre pasture was down. John had to get through it to get to the hay bales as they were drifted from the other side. But most of the horses have been in the pasture for ten years, the youngest for almost 6 years. They know the boundaries. Even when I open a fence to let them through, if it isn’t one they are familiar with, I have a hard time getting them to cross. They respect electric wire very much.

Not five minutes later, I peeked around the barn to check on them. I saw all five at the far end of the pasture: the end with the downed fence. I hollered at them in my “get food” voice. It was then I realized they were on the other side of the drifts. They’d gone through the downed fence. But even so, I wasn’t panicked. They had heard my voice and I saw them trotting around the house coming back toward the barn. 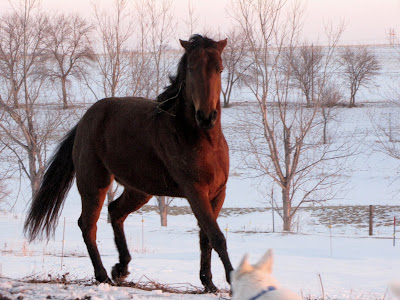 Something (Ritz?) made them change direction and I first heard their thundering hooves going down the driveway and it was seconds later I saw them galloping down our county road, full speed toward the highway a quarter of a mile away. I screamed at John that the horses were out and to come help. I was torn for a moment between running for the tack room for halters and ropes or my truck. Without much hesitation, I ran to the Durango. I grabbed some twine in the garage, jumped in and sped down the road.

A neighbor must have just passed our driveway or was coming up this direction. I found them stopped at the highway, criss-crossing the road. Another car had stopped on the other side. There is about a mile of flat highway so I knew we were spared from any traffic. As the horses were standing not 25 feet from me, I opened the highway gate to our pasture, but before I could move them in, they got spooked again and trotted away. 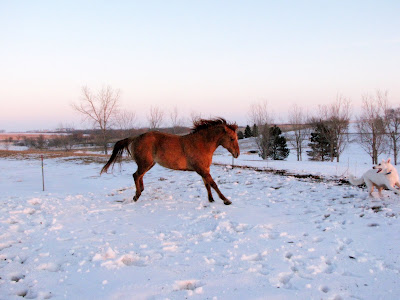 My neighbor’s wife got out of the passenger side of the car and approached Baby and she stopped. I was within 10 feet of her when the other horses went around their car and took off further down the highway. I ran back to my Durango as the neighbor took his car after the horses. Not speeding after, but alongside to try to get in front of them or to push them off the highway. There was only a ½ mile of highway left until it crested a hill. Luckily, the horses darted off the highway and onto a field road.

It was dusk now. I watched them as they galloped across the field and continued heading north. By now, John had passed me in his truck and he headed to the next mile road. I called the kids and told them to get halters, leads and come down here with the ATV. Our neighbor on the corner joined us in his truck and he and John stood guard as I drove back to the nearest farm to get closer to the field. I saw the horses had stopped in the driveway of the next farm and got out of my truck and started walking toward them, talking softly as I walked so they could recognize my voice. When Windy approached me, I slipped some twine around her neck.

Case arrived on the ATV and McCain in the truck. I was disappointed to find the only halter they brought was a nylon halter that was slightly bigger than yearling sized. The other tack? A rope rein (not "roping reins" – ONE rope rein), an old rope and another rope that looked to be an untied rope halter or a dog leash. I barked at McCain about not bringing the right halters and he said it was all he could find. I later found out he went to the tack room of the living quarter trailer which has been pretty much cleaned out for the winter. He could have found a dozen halters and leads in the tack room of the barn. Definitely does not have my horse genes.

I slipped the tight halter on Windy. John and McCain put the ropes around Ginger's and Blue’s neck. With Case using the ATV to keep Butter and Baby with our herd and the neighbor escorting us in his truck to keep traffic slow and at bay, we walked our little herd home. Three quarters of a mile down the highway and another quarter mile up our road.

It was really about as much excitement as my brittle winter heart and bones could endure.