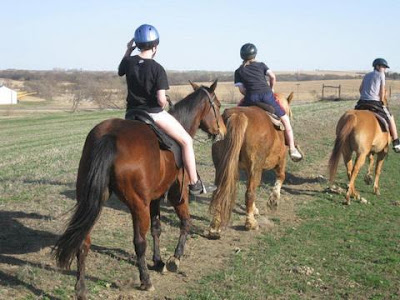 We had awesome weather on Easter Sunday: sunny and warm -- a top ten day for Nebraska. Festivities were held at my mother-in-law’s home just down the hill from our place. After helping myself to the Easter candy bowl both before and after a few helpings of dinner, I needed a distraction. The young teen nieces and nephews had earlier asked to ride the horses. I begged off because there was no way my gluttonous body could saddle a horse, let alone ride one! So the kids opted to go back up to the house and jump on the trampoline and I opened another package of Peeps.

As the afternoon passed, I needed to make a decision: eat the apple pie or move away from the table. Reluctantly, I left the dining room and headed outside. The kids who wanted to ride were now up to our house jumping on the trampoline. Perhaps a ride wouldn’t be a bad idea. We would “sneak” a real ride so that the “little kids” didn’t see us. Now the task of saddling five horses… 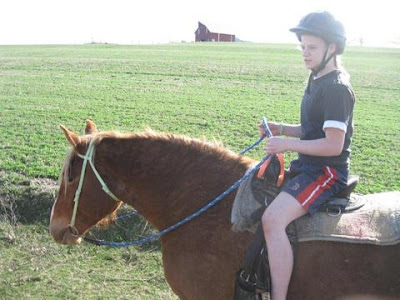 “I get Windy,” I heard her sister say. (Great! There goes my ride.)

“I’m riding Blue, “ my nephew piped up. Probably a good thing since Blue has just blown an abscess and this was the smallest child. Blue’s foot was wrapped in a duct tape boot. He would do a lot more damage to it if were to leave him alone. So he made the cut. And Case of course was on Butter.

That left me with Ginger. Oh, happy day! She was pretty hot when John rode her a week ago. This ought to be fun.

I saddled the horses for the kids first. Shaking my head at the kids' shorts and bare legs, but thankful no one had sandals on, I tossed each child a helmet. They were mounted and heading down the path to the pasture before I could get my potato-laden leg swung over the saddle. Ginger was NOT happy being left behind and shot out like a bullet as I was still trying to put my right foot in the stirrup. She danced and tossed her head trying to move past the other horses. She does not like to be last. She would allow me about one shot with the camera before she would grab the bit and move on. 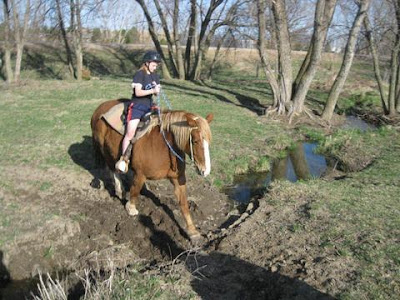 The culvert had washed out going into the corner pasture. While I told Ginger to “walk” through where the culvert was, I was hoping the kids knew enough not to let their horses jump it. I held my breath thinking “please don’t die.” Baby and Blue walked through it. Windy jumped. And the kids trotted past me and out into the now green pasture. I made Ginger walk slowly. She flipped her tail and tossed her head in protest, before she dropped her chin to her chest in protest, as she does when she expresses displeasure. 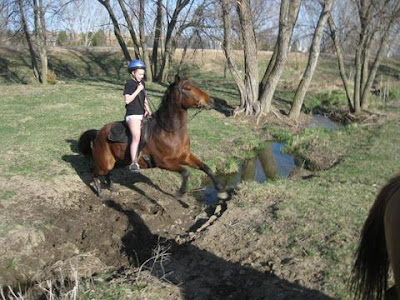 No sooner had we got down to the pasture than the kids were done riding; anxious to go back to playing on the trampoline or driving the ATV. (What the hell?) Never mind that I just saddled five, count them – FIVE horses – which took me longer than this entire ride! On the way back to the barn, the girl riding Windy wasn’t paying attention & turned her into a fence post that had a roll of electric fence wrapped over it which winter had taken down. Windy brushed against the wire & jumped. The girl fell. My heart skipped a beat. Windy stopped and waited as the girl remounted, laughing the entire time. Ah, to be young and fall and get back up easily (and not realize you are riding in an english saddle!)

I had each of the kids unsaddle their own horse and bring the tack into the tack room for me to put away. At least that part was easy. When I made it back to my mother-in-law's dining room, I was thrilled to find someone had taken the time to make deviled eggs from those gathered earlier that day. Round two (or three) of the glutton-fest! 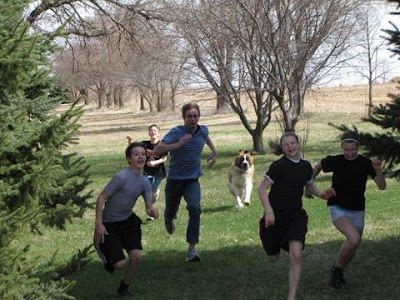 Not horse related, but ranking up there in cute factor was our St. Bernard, Bodette. He thought he was in dog-heaven with all the kids around that day. As I browsed through my downloaded pictures, it was like “here’s Waldo”. Bo made his way into about every shot. It was a good day to be a big, furry, loveable dog! 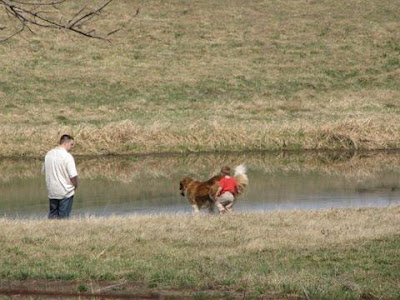 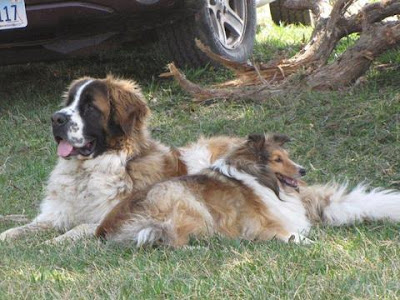