Two For the Show

Yesterday was show time! Loaded Windy up about noon to head for the Capital City Horse and Pony Club. Although we have done some casual games at fund raisers, this was our first “real” show. I’d been told that Cap City runs a good show and that it is not only fun and friendly, but newbies are always welcome. And I found this to be true. 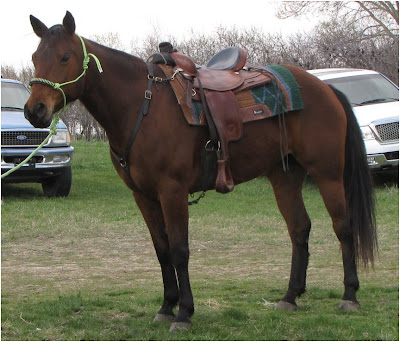 I had determined what classes I wanted to participate in before I left home and had completed and printed out the necessary registration form. We got there just as the English events were starting. My friend and CTR mentor, Shari, was already there. I saddled and together we rode the grounds to acclimate the horses to the unfamiliar surroundings. Windy wasn’t real interested in what was going on; more taken with all the green grass underfoot.

The Trail Class was set up outside of the arena and we could pass through it at our leisure. Not sure how long it would be “open”, we made our way over to the judge. Shari went first. She and her horse, Wiley, are CTR veterans and really shine at obstacles. It was no surprise they did the trail course easily.

I watched and wondered. The gate should be okay. We do gates at home, although this one was free standing and resembled a divider bar in a trailer. If I can get her sidled up to it, we should be good. The bridge was narrow with rails. It seemed doubtful. Then there was the mailbox. You all remember my mailbox incident at Expo. I try to forget. Jog over logs should be fine… sidepass a large pole – we’ve done that before. Back in an “L”. We can back, but the turn might be tricky and then take a slicker from pole to pole.

Well. For one, there are no photos, thank goodness. We didn’t sidle up to the gate. She saw no need to sidle up to the gate. I’d move her left, she’d move right… Yeah, you get the picture. Next! The bridge. Ah, we worked it. Got 2 feet on it. Then 2 feet in the air. I didn’t give up quickly, but eventually passed. May as well get the mailbox embarrassment over. But to my surprise, she stopped; I reached, retrieved, waved the flag & put it back… Who'd of thunk? The rest of the course was half hits and half misses. But it was our first time and we did it. Found out later the class was open for several hours. So we'll warm up next time longer than 15 minutes.

Our first arena event was Walk/Trot Open. I had decided not to do western pleasure because we are still learning leads. And her lope, though not fast for what I do on the trails, is fast for showing. The Walk/Trot sounded like a perfect first start. You know, for us beginners.

Oh. My. God! It was the largest class of the day. Forty-three entrants. Probably made up of half chickens like me and half seasoned riders entering an easy class! I went in the first heat (do they call them heats at horse shows?) 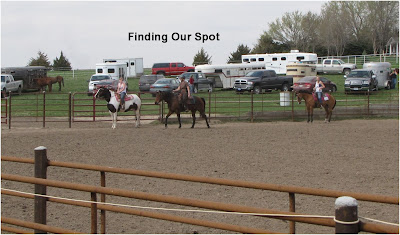 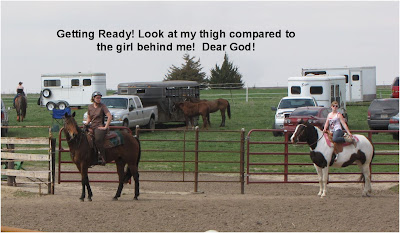 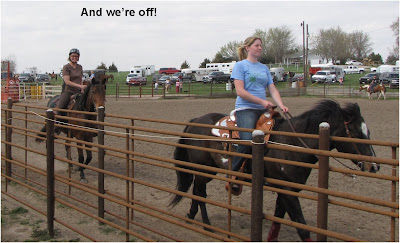 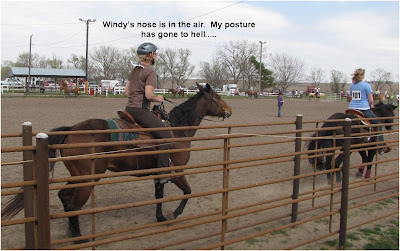 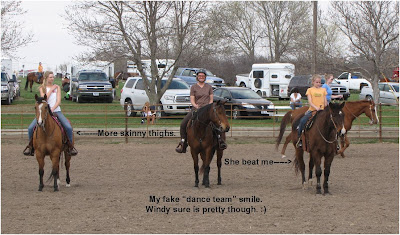 We walked and trotted. Although she was not in the best frame, she did what I asked; and only pinned her ears a couple of times. A friend along the rail reminded me to sit back (thank you) and we got through it without dying. And it was fun!

I signed up for three speed events. Barrels, poles and figure 8. I decided I would see how we do in barrels and then decide if I wanted to proceed with the other two speed classes. I had no intention of running; thought I would trot the barrels just to get through it.

When the gate opened, we moved toward the first barrel. She seemed pretty level, so I moved her into a lope. We did okay on that barrel. The second one we kind of fell apart a bit, but moved onto the third at a lope. After turning that barrel, I let her run back. Looked like we were ready to run into the gate as she stopped a few inches from it. The gate guy reminded me to turn her. Well hell, I hadn’t planned on running. Had I planned on running, I might have thought about how it would end. Our time was 43.something seconds. I’ll set a goal of 40 seconds next time! And I’ll practice turning! 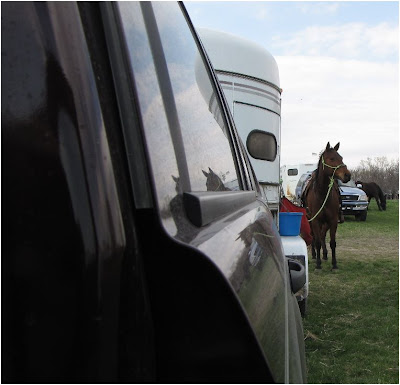 It was after 6:00 by this time. It had been a long day and they had two age classes to go through before I would be up again on poles. I decided to call it a day. I really enjoyed myself and although I doubt I’ll leave the trails to become a show girl, it is something else I can do with my horse and I am sure I will again.

I can't say enough about the Capital City Horse & Pony group! What a class act! As promised, it is beginner friendly, a fun atmosphere and they have the most awesome nachos in their concession stand! We'll be back....