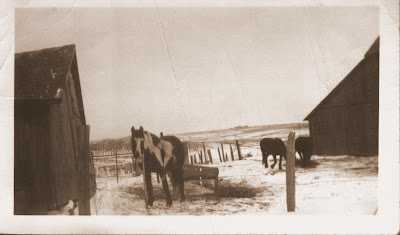 This week's Sunday Stills challenge is "History"; defined as something 60 years old or more. I would have loved to have gotten on my horse and rode around my country roads snapping shots that fit the category, but I had a terribly busy week at work and there was just no spare time. However, this challenge is a good opportunity to share some pictures from my archives that were taken in 2005 and the story that goes with it. 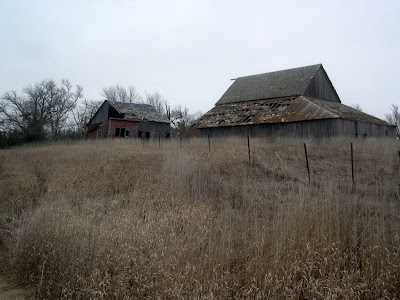 Early that year, my mom was diagnosed with pancreatic cancer. For those who don't know your cancers, that is the bad one. The "Michael Landon" cancer, we called it. Not a matter of "if", but "how long?" It was about a 2.5 hour drive to Mom's house from ours and each weekend, I would take one or both of the boys and we would go "home" to spend time with her. Part of our weekend ritual was to get in the car and drive somewhere. Chasing memories, I guess. On this particular day, we drove to the farm where Mom was raised. 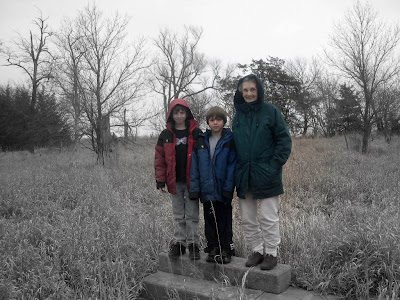 Mom's dad, Frederick Hornbussel, was a German immigrant, coming to America when he was just 18 years old or so. He arrived in New Orleans and made his way to Nebraska, where I understand other from Germany that he knew had settled. He farmed until his death and then Grandma moved in with us. Dad and my uncle kept cows out to the farm and each day after school, we would go to the farm so dad could do chores. We played in the barns & explored. I am thinking the family sold the farm around 1966. The house was torn down in the years that followed. I remember each bedroom had etched glass windows. I think Dad said some vandals had stolen all of the glass from those doors. The above picture of my boys with their grandma was taken on what was the steps to the back porch of the house. 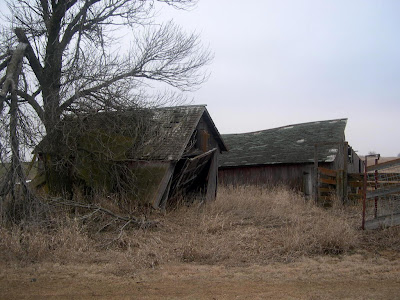 The building to the left was the garage. Dad had an old tractor that he kept parked in this garage. The building behind it was just a working shed. We kept a chute beside that building and the calves would be run up that chute when they were vaccinated and dehorned. You can see this same building on the left hand side of the photo at the beginning of the blog, taken when my mom was a child. 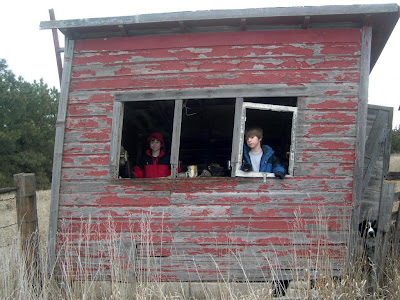 My sister and I always called this building the "Dairy Queen". We would play like we were Dairy Queen workers and one of us would place an order through the window my boys are looking through. I remember once when high winds came through, this building was overturned. I don't recall my dad straightening it out; perhaps this was done by the new owners. 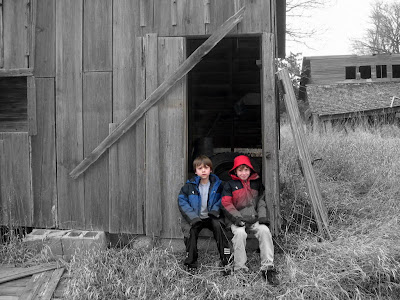 Here the boys are sitting in the doorway of the corn crib. My mom said Grandpa would always take a break there and sit down to fill and smoke his pipe. When he died of an apparent heart attack, this was where he was found. It's not morbid to me; just a piece of history. 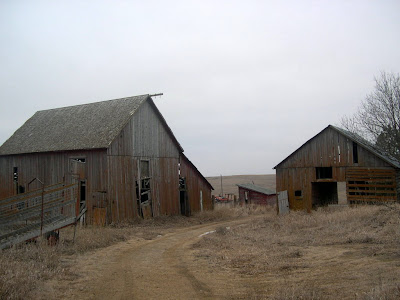 This view is looking back toward the barn and the corn crib, with the "Dairy Queen" in the background. We used to have barn cats that ran wild here. But they all had names and we would search eagerly for them every time we were out there. The hayloft in the barn had a big rope that we would swing across from bale to bale. What good memories... 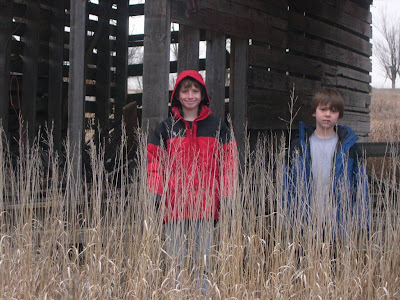 This was the last time I visited the farm. Mom died about 45 days after these pictures were taken. I love these pictures and the history and the memories. But what haunts me are my boys' eyes. Especially Case, my youngest. He is so sad. When I told the boys that Grandma was sick with cancer, McCain asked "Is she going to die?" They never knew my dad except that he died of cancer. To them, cancer meant death. I told the boys that we will pray Grandma is with us a long time, but that we have to be prepared for her to go. I remember McCain whimpering. He said, "I don't know what to do about that?" I thought that was an interesting thing for a then 11-year-old to say. And you know, I didn't know what to do about that either.
This day was bittersweet. I had such good memories of growing up at the farm. Of the poppy flowers that you could see out the west window of the house. The big mulberry tree right by the well. Our first horses were kept in that very same barn. The wheat field was just beyond it to the south. This challenge took me back to that day and beyond.