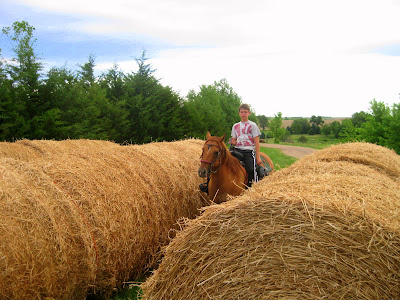 We have a great little trail around the perimeter of our property including a nice little tree-lined path between our pasture fence and the creek running next to the highway. But at the end of that trail was a bog; a sinking-up-to-the-hock type bog that wasn’t worth risking the tendons on the horse trying to cross. So from there you must take the highway with cars buzzing by you, the horse and dogs at 65 mph or you backtrack. We have always planned to put a bridge there or something to aid in crossing so we could finish the loop, but just hadn’t gotten around to it; until this year. 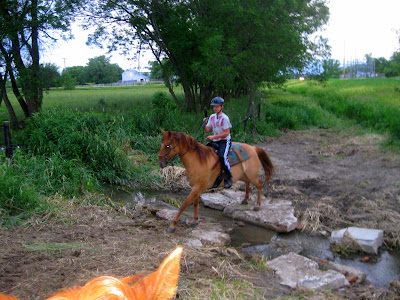 John brought home some broken up pavement from a demo job. He dumped the load into the bog and then moved the pieces of concrete with the tractor to put in a base where the bog was. He continued to stack concrete on the base until the water was running clean over the rock. Then he drove across it with the tractor to further set the base and viola! A water crossing! 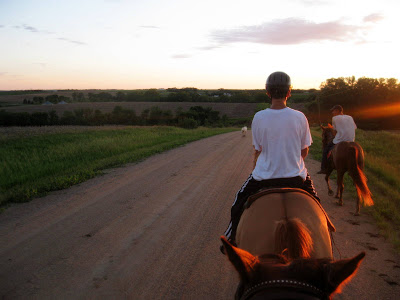 Vacation is only a few weeks away and I’ve been trying to ride all three horses to get them somewhat legged up for the trip. The idea of a water crossing on our place has spawned Case’s interest in riding again. So for several nights this past week, I had a riding buddy. Case was three-years-old when we bought our first horse, so he has literally grown up on horses. And I love to watch him ride. We head down the road, cross the water crossing, and run through the fields together. He told me the other day he’d forgotten how much fun it was to ride. Especially to ride fast.

The other night we enticed John to ride with us. He just put a halter and lead rope on Ginger and an old Indian blanket to keep him from getting sweaty since he didn’t saddle. We rode for a couple miles and at the bottom of the hill, Case told him he wanted to race. And they did. What you don’t see on the video is the finish line. Or the lack of one. Not wearing a bridle, Ginger just kept going and going and going. John was beyond pulling her in with a lead rope and just hung on as she made a wide turn down the hill, through the pasture, taking down a dead wire of electric fence in her way, one sliding stop at another fence, a quick pivot before lunging off to the barn. Case and I followed finding his hat, sunglasses and cigarettes along the way.