Have Wheels, Can Travel.... Again! 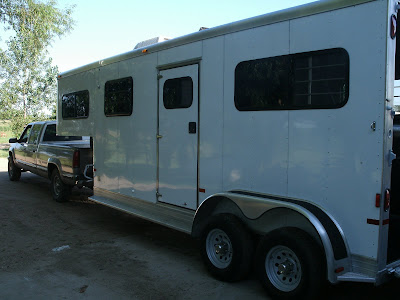 My ship came in. Okay, so not a ship, but a horse trailer. A new-to-me trailer. And I’m tickled pink! You see, I’ve coveted this trailer for a few years. Not one like it, but this very trailer! I found it first on Craig’s List, but certainly didn’t need it myself at that time. I told a friend about it and she bought it. But it should have been mine! 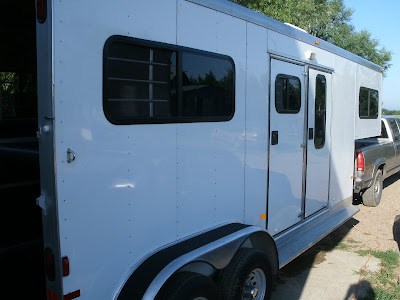 Right before we left on vacation, my friend sent me an ad to put on Horsetrailriders.com classifieds. She was selling this trailer and a larger one she had and hoping to find something in between size-wise. I knew someone was going to get a nice trailer. 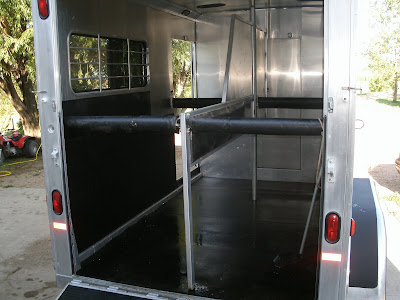 After our aborted vacation, I quickly sold my trailer. It was too big and too heavy and most often we would be pulling only one or two horses. The truck is not doing well and rather than start looking for another one ton truck, decided to downsize the trailer to one I could pull with a smaller truck. And it was a coincidence that the coveted trailer just happened to be for sale! 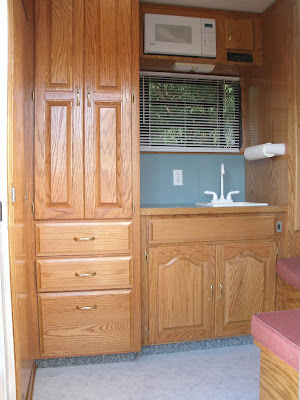 I met my friend a few days later and went over the trailer again; pointing out what I liked, knowing I’d be giving some things up because I was downsizing. But I really thought it would work. It was going to be mine. Ah, but my friend hadn’t found a new one yet; was she ready to give this up yet? Not really..... 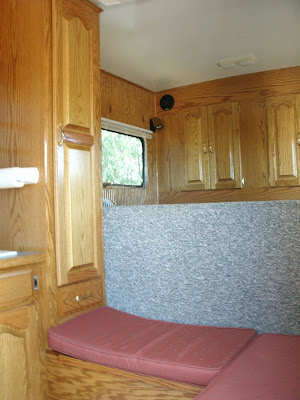 While she continued to look for a new one, I continued to look at different options. I found some I could live with… but they were in Georgia or Texas. And I would still have to convert it for camping. There was nothing here that really caught my eye except THAT one. Would I find something by fall? We missed fall camping last year when the snow came in October. I would certainly hate to miss it because I didn’t have a camping trailer! I could always drive my Durango and pull my bumper pull trailer. But could I go back to sleeping in a tent? (Shivers….) 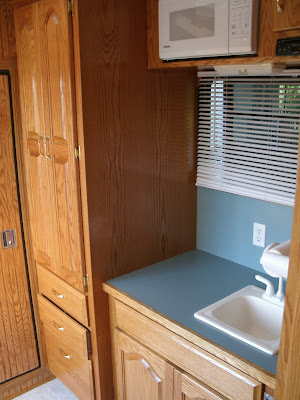 My friend called me yesterday and asked how my search was going. “Not good,” I told her as I was Mapquesting how far Steamboat Springs, CO was, as there was a nice trailer there that with some concessions, I might make due. She went on to say that if I still wanted hers, to come and get it. It was mine. I said a little prayer that Hi-Ho Silver would start & he fired right up. John and I went and looked at it one more time. Hooked it up and pulled it home. 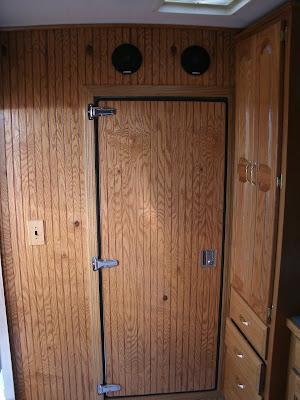 It won’t be without challenges. Downsizing from a 4 horse trailer to a 2 horse will be hard. But I just have to be more selective in what I take with me. And should the boys want to go, we can easily hook up the bumper pull to the SUV and take two vehicles. Not ideal, but for the few times they may ride with us, certainly do-able. 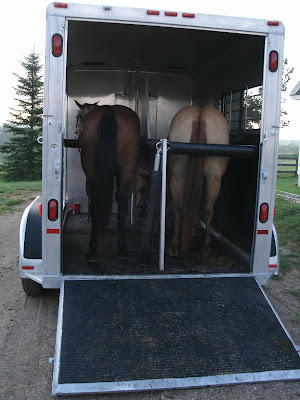 I spent the early part of the day introducing Windy and Butter to the new trailer. That in itself wouldn’t have been an issue, but the ramp load – Oh. My. God. – has added a whole new dimension – at least for Windy. And we had to work it today. She finally went in; but not without bumping her head (her fault) and falling on her face (dang slick shoes!) I unloaded her and reloaded several times to make sure she was comfortable. I won’t go as far as saying she is, but we’ll do it again in the next day or so. Butter, you just never know about that one. Today she just stepped right in like she did it all her life. Tomorrow? Who knows. By the time I finished with my mare, I wasn't about to go get Blue. It will certainly be a new complication to his life. And it won't be good. Poor guy. (Look at how much space there is! Windy is 15.1hh and Butter is a butter ball!)

I spent the rest of the day putting the living quarters together with the stuff I hastily pulled from my old trailer when it sold. It fit! I’m all fixed up again now – need to find somewhere to go. If only the weather would cooperate! Right now it is too hot and humid for man or beast. Forget everything I have said about liking the four seasons. Two of them really stink this year!

So… I have horse; will travel. If they’ll load. And if the truck will start, we are back in business!