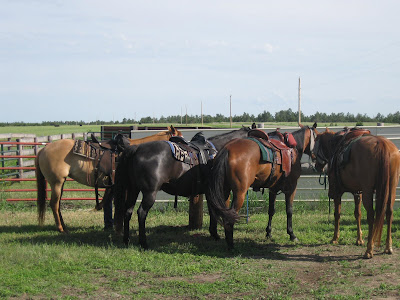 I won’t lie. Camping with horses is a lot of work. Not only the necessary preparations that I talked about in my previous blog, but setting up the camp once we are there. Over the years, we’ve perfected it, but you still don’t know what you don’t know (terrain, etc.) until you get to the destination. We assume we will be setting up our portable fencing but there is also a possibility we will high-tie or picket. We’ll be prepared for either. Our horses have been stabled many different ways on camping trips; picketed, tied to the trailer and even hobbled. They’ll live. There is not running water where we are going. We’ll bring 50 gallons with us for the horses and 30 gallons for us plus a couple dozen bottles of water. There is no garbage service, so we pack out what we pack in in the wilderness. So we must be mindful of that, too. After we run out of horse water, we'll fetch it from the stream or go in search of a campground with running water. That won’t be the end of the world either way. It’s part of camping.

On the human side, there is the food situation. I don’t like to cook on a good day at home. The idea of spending the day in the saddle and coming back to prepare food over fire to feed my family is about enough to make me not ever want to camp with horses. But over the years, I have solved that problem, too. I prepare dishes in advance, freeze them and then simply warm them up on the camp stove.

Just because a person does not like to cook does not make them a bad cook. I’m no Pioneer Woman, but can follow a recipe pretty well and have a knack for improvising for the tastes of my family. The boys get pretty excited when I start cooking for camp and have asked on more than one occasion why we can’t have this or that more often. Lacking the joy of cooking makes me really feel like a failure as a mother, but I more than make up for it when we camp. 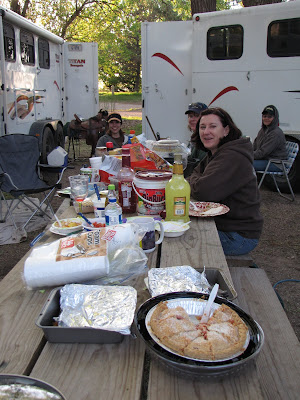 Some of what I have planned is PW Chicken Spaghetti, Pulled Pork, Lasagna, Ho-Bo Dinners, meat for Taco Night, Steak Night and Sweet & Sour Chicken. I also made Oven Ham Sammies for the saddle bag if we are eating on the trail. I’ve made potato salad, pasta salad and homemade salsa. We’ll also have plenty of hot dogs, lunch meat, wraps and chips. We certainly won’t starve.

I’ve been freezing ice blocks for the cooler. My friend, Sam, has provided me with pounds of artificial ice blocks that she has in her lab. We also have a frig in our trailer. It’s likely we will have to make an ice run mid-week; probably about the same time we make the water run.

I have been doing pretty well with the diet since I’ve joined Weight Watchers again; only 6 pounds from my goal. All I can say is I had better do a lot of hiking between riding to work off what we will be eating. My food choices weren’t wise ones from a dieter’s perspective.
- July 08, 2010

Email ThisBlogThis!Share to TwitterShare to FacebookShare to Pinterest
Labels: Wyoming