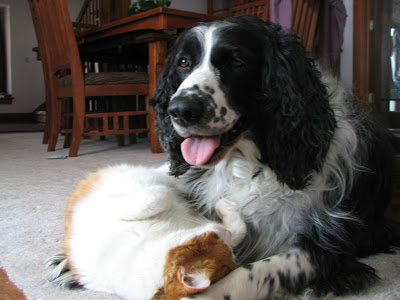 Madeline does nothing but lay around all day
Nothing excites her
Nothing disturbs her
Except the occasional thunderstorm
Or scolding the boy dogs when they play.
If Madeline were a person
She would be my BFF.
She's loyal and kind.
Keeps her opinions to herself
But offers kind eyes when she knows
I've had a bad day.
When I walk in after work
She puts her head between my knees
That's her way of hugging.
Of welcoming me home. 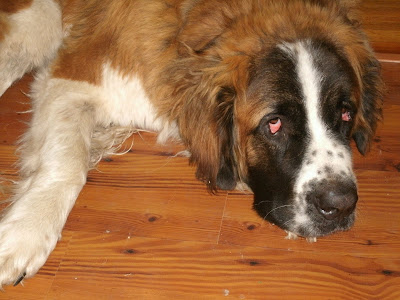 I truly didn't think I could have a lazier dog than Madeline.
Then we got Bo.
And I've learned Maddie isn't the laziest dog in the world;
Bo is the laziest dog in the world.
I literally had to sweep around him this morning.
Popping him with the broom didn't help.
He raised his head, looked annoyed, sighed &
Laid it back down again.
I'm pretty sure I get my exercise
Just from stepping over the Bozo.
The other night
He came creeping up to my bedroom
And jumped on the bed and
Quickly laid down; his back to me.
Like I wouldn't notice
A St. Bernard lying next to me. 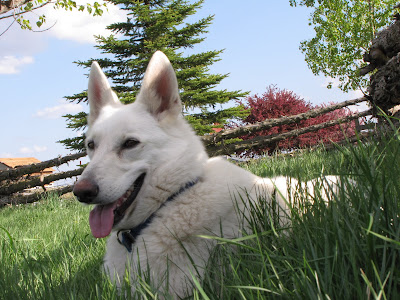 I wish my kids were as obedient as Ritz
And would follow me around
All day just waiting for the next command
He totally digs being with me.
And if you ever want to witness pure joy on a dog’s face
It’s when I saddle up Windy and we head down the road
And he gets to go, too!
When I'm in the house and he is outside
He keeps track of what room I am in.
If I'm in the office,
He’s right here on the front porch
Watching me through the door.
If I'm in the kitchen,
He's on the deck.
Still watching.
He's a good soldier.
- July 29, 2010

Email ThisBlogThis!Share to TwitterShare to FacebookShare to Pinterest
Labels: Dogs