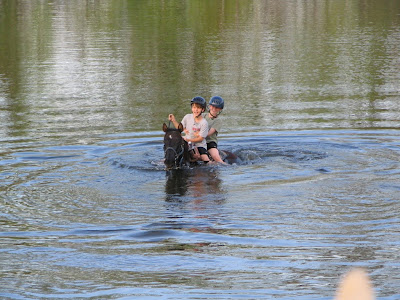 It's supposedly the last day of this gawd-awful heatwave. The humidity was so bad yesterday that the shoes that I wore to hose off the horses the night before and had left on the porch, were still damp 24 hours later; even with temperatures close to 100 all day. The horses seem to enjoy their evening showers and it makes me feel good to give them some relief.

I was going through photo files the other evening and found some early pictures of the boys and the horses. The first few years were pre-digital. Someday I need to scan them. Gosh, I can't even imagine having to take in film anymore. I have literally thousands of picture files on my computer (and back-up drive!) I should clean some out, but it's kind of like cleaning a closet. You find things you forget about and spend time remembering and then as time passes, your forget the task at hand and close it up for another day. I was thinking about doing that when I ran across these pictures. 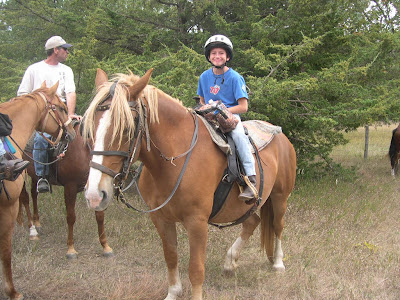 The above picture of McCain and Baby was taken in 2005 when McCain was 11-years-old and Baby was 5. She had foaled GinnyBelle early that spring and this was her first outing away from the baby. By the end of the trail ride, her bag had filled up so much that she leaked milk with every step she took. McCain was so small to be on such a big horse, but he loved that he could. Check out her bridle. It's a driving bridle, complete with blinkers. 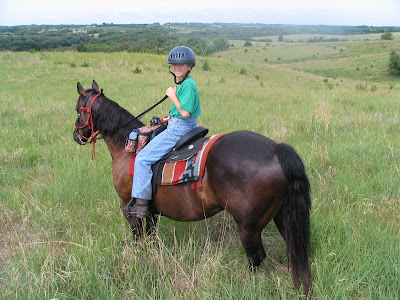 For the most part, McCain rode Blue. When the boys were little, they spent many hours and miles behind me while I rode Blue, so they trusted him. And he took care of them. That is Blue swimming with the kids in the picture at the top of this post. Both of these pictures were taken in 2006. 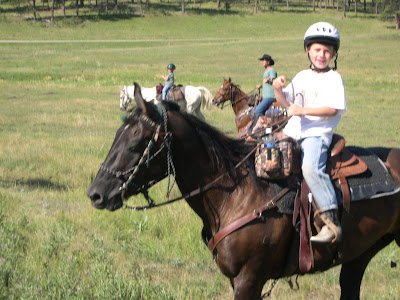 In late 2003, I bought another black gelding called Mikey. He was a bigger horse than Blue and had some rodeo experience. We were told you could rope off him and he'd done barrel racing and poles. I should have passed on him when we looked at him. He appeared a little off in the front, but he had long toes with shoes that should have been removed months before and was running on cornstalks. A little thin; he looked like he needed a new home. So I bought him. It turned out that he did get sore on the long rides, so Case claimed him. He was a great horse, but I just felt he was too big for such a little kid. Case was 7 in this picture. It was taken in South Dakota and John and Case had just chased a herd of antelope. 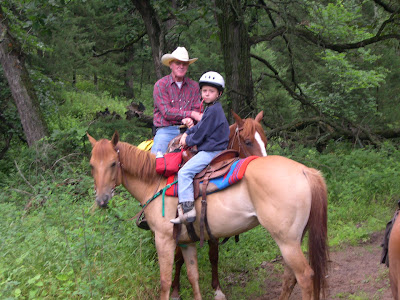 Later that summer, we were camping at Rock Creek. We had brought our niece with us and she was riding double with John or me. A friend was camping, too, and had brought an extra horse. A little 4-year-old red dun mare. Seeing that we were short a horse, he offered this horse to Case to ride for the weekend. She seemed just his size. This was his first ride on her. The next spring we bought that mare, Butterscotch. 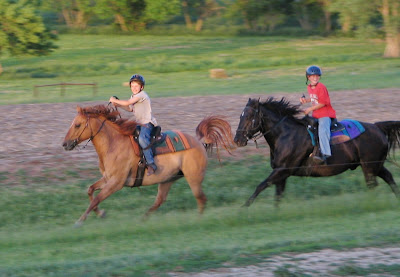 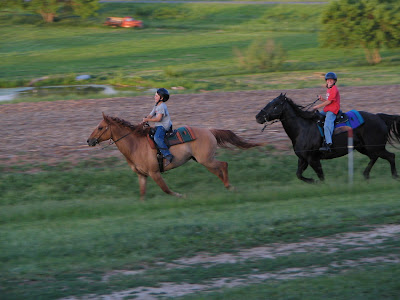 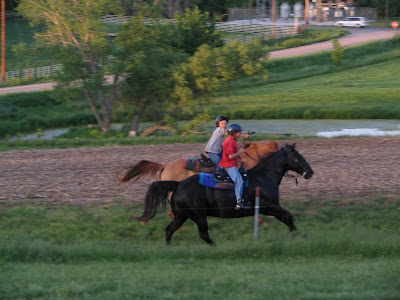 This rather poor quality video was taken of the boys last spring in their race down the road. One was wearing a GPS and clocked their high speed at just over 40 mph. They can ride!

As I've mentioned before, Case will still ride with me on occasion, but McCain hasn't been on a horse since he took a girl riding last fall and before that, probably that race. But I think they had fun during those early years and I enjoyed watching them grow as young riders. Maybe someday they will come back to it. I hope so.
- August 13, 2010