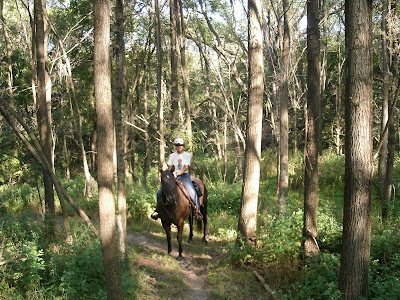 Taking full advantage of these mild days, I loaded up Blue this morning and headed back out to Branched Oak to work on the mapping for the Trail Challenge & Scavenger Hunt. I think I was abducted by aliens for a week, because I seem to have "lost time." I swore it was three weeks away and then today I wake up and look at the calendar and BAM! Just like that, I'm missing a week! I have a lot of work to do between now and then. Good thing I am one of those who work best under pressure because the pressure is on! 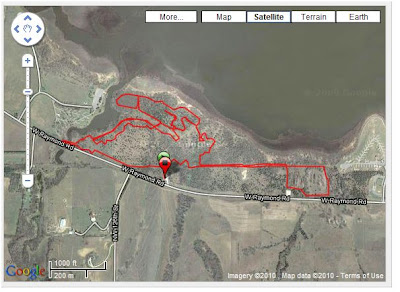 I have been using the GPS to record all the trails and then download to Garmin Connect to review. The above map is one of my most recent downloads and the trail shown at the top near the water is a major trail that will be used in the competition. Does anyone else see what I see? Can you imagine the instructions: "Turn left at the base of the penis and continue down the shaft until you reach the…." Yeah, you get the idea. This is going to be one high-class event, let me tell you!

You know how everyone is always looking for a "good BROKE horse." And we all know they are not easy to find. Heck, my Windy is a "broke" horse, but not always good. When I don't ride Windy, I usually load up Butter or Ginger because Case and John will ride more than McCain and I feel I need to keep their horses legged up, too, for their occasional rides. As time passed, I forgot about my "good broke horse" that seems to have unobtrusively moved to the back burner. That would be my Reggie Blue. Blue Boy. Blue.

You may or may not remember my blog about Blue a few years ago. Blue was four-years- old when we bought him in December of 2000. He was probably one of the most well-trained horses we have ever had. I, being a complete novice at the time, didn't know what he knew and have only discovered some of his buttons in recent years following lessons with Windy, no doubt confusing the poor boy all these years. 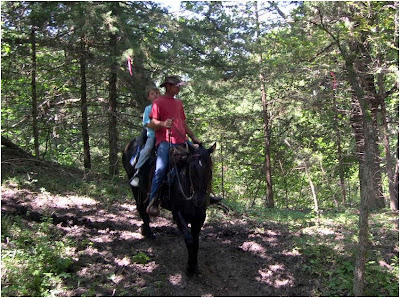 The first day we rode him at home, ten years ago, I was leaning down fixing my stirrup when John flew by me on Ginger. Blue's first reaction was to follow and took off. The reins, which I had left on his neck, fell to the ground and I was desperately trying to right myself in the saddle. In my panic, I recalled the girl I bought him from saying "he stops on one rein." At that time in my short horse life, I had no idea what that meant but reached down for the only rein I felt I could grasp and pulled. And it was like God himself put those reins in my hand. Blue stopped on a dime. With that one gesture, he earned my trust. 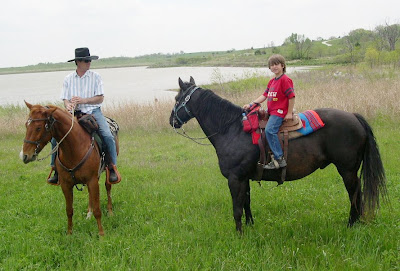 Blue's wonderful disposition and ease on the trail made him a favorite with my boys in those early years and throughout the years each claimed him as their own for a season or two. I moved on to other horses because I knew the boys were safe on Blue. McCain has pretty much given up riding and Case no longer appreciates Blue's choppy ride, so if he's not riding Butter, Ginger will be his second choice. Occasionally John will swing on Blue to bring the cows up. 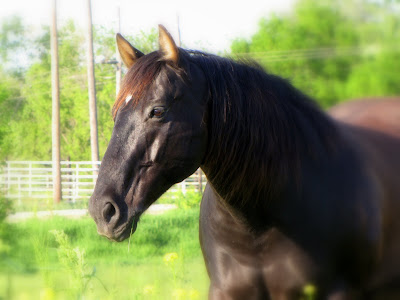 When Windy became laid up with a swollen knee this past week and knowing Cowgirl Weekend is less than 4 weeks away, not 5 (remember, I lost a week in a space ship), I did a quick inventory of our herd to determine who is on the B Team just in case she can't make the trip. When I got to Blue, overweight and underworked, I thought "why not?" Four weeks is enough time to get him legged up and he is not only MY horse, he was my first Cowgirl Weekend horse. And like the Good Broke Horse he is, (who if he had a voice, would sound like Elvis) has stepped up to the plate again and has quickly become my Go-To Guy.

Email ThisBlogThis!Share to TwitterShare to FacebookShare to Pinterest
Labels: Blue