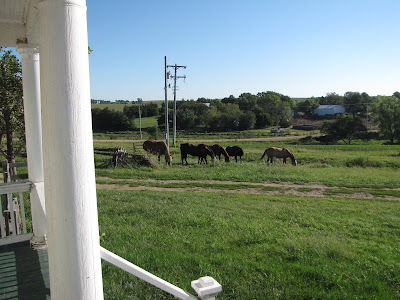 Friday is my work-at-home day; first for work & then for the good of the household. Sheila, Kathy, Deb & I tried to do a Friday afternoon ride club this season, but spring rains interrupted our plans quite frequently, then the heat wave. Combine that with our busy schedules and it didn't happen like we had hoped. I can't believe that by next spring, Sheila most likely will be on the west coast... 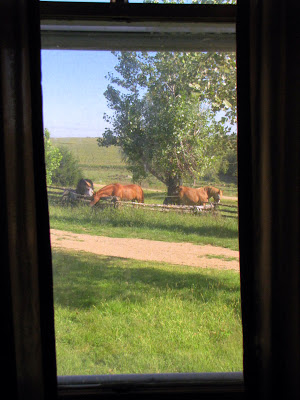 The horses are quite literally outside my office window. The only way things would get better is if the dogs, who are literally at my feet, would quit farting! (What DID they eat yesterday?) Since I have kept Windy and Butter up here at the barn to watch Windy's wound, the other horses have stayed in the adjoining corral rather than go down to pasture even though the gate is open and they most certainly could. Being that they are the herd leaders and Windy and Butter are at the bottom of the pecking order, I didn't think it would matter to them that those mares weren't with them. I guess I was wrong. I ended up tossing them a bale of hay in the feeder last night, too.

I moved them all out to this side pasture early this morning. It doesn't have the best fencing, so don't use it much unless I am here to watch. The grass is long and thick there; they could graze there for a week, I'd bet.

Speaking of grass, ours needs mowed again. The last time we had to do it with the tractor mower because our garden tractor is eating $49 belts. We thought it was a bad belt so we bought another one. Nope. In about 2.5 hours that one was shot, too. So before we buy another $49 belt, JV needs to take a peek at WHY it is happening and fix that first. So we'll probably have to mow again with the tractor mower. Don't you just love acreage-keeping? 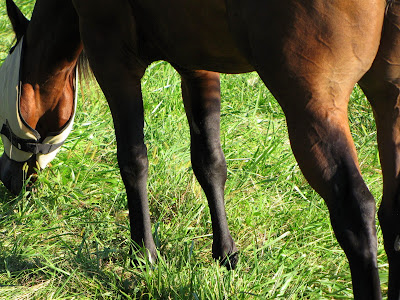 I had originally thought Windy's swollen knee was a result of being kicked. There was what looked like a small scrape above it. But the next day I noticed that wound was draining, so now I think she was poked with a stick or wire or something and actually wonder if a splinter might still be in there? So I picked up some Epsom salt salve to smear on it and started her on antibiotics. 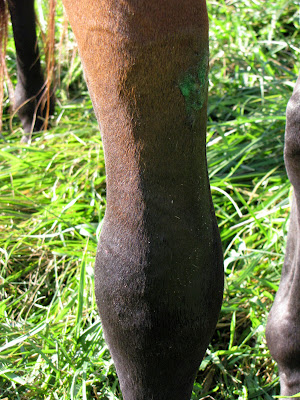 There is still some swelling, but no oozing anymore. I do the water treatment, too. I guess I'll just wait and see. In the meantime, Blue has been getting some more saddle time. Taken out of semi-retirement, he has hunkered down and is doing his job. I realized I have missed riding the ol' boy and will start including him more often in the rotation. He is too nice of horse to leave out to pasture.

I have been perusing the internet looking for something to take the edge off Windy's next heat cycle, which will no doubt coincide with Cowgirl Weekend. In the comments section of that previous post, Kate said she has had some success with Mare Magic, a raspberry leaf supplement. I picked up a bag yesterday and started her on it. She seemed to eat it just fine with her grain. Since normally she isn't terribly awful when she cycles, hopefully this will be just the little boost she needs to help her through it more comfortably. I certainly wish I could use my HSA account at the vet supply store.