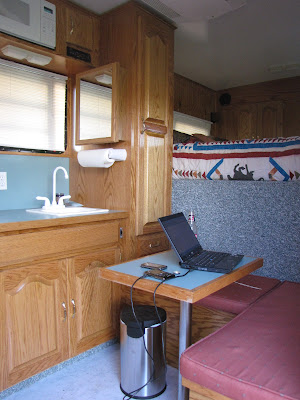 Okay, so I'm sitting here at the table in my horse trailer with my lap top and the A/C running; drinking a Mike's Hard Lemonade. Camping, you ask? No. My horse trailer is sitting back by my barn. I hear echoes of "you might be a redneck if…." But hey, my horse trailer is a lot nicer than some homes I've seen and probably cleaner than my own right now. At least that's my story and I'm stickin' to it. Side note: The dogs keep doing "drive-bys", stopping and hitting the door, a deep bark now and then, but I won't let them in.

Actually, I am thinking and planning; taking pictures and blogging. Although this trailer is darn near perfect in every way, there is one major flaw. No, there are three flaws. Flaw #1 is being fixed as soon as the ever-loving' part gets off the slow train from the east coast…. But there are two others. 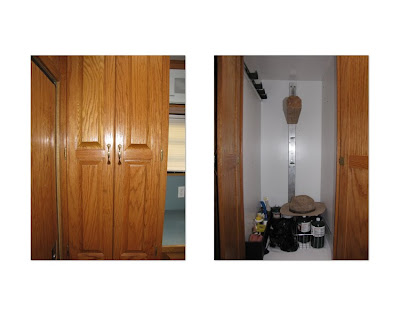 Flaw #2: The person who designed the living quarters had one of the cupboards serve as a tack compartment. Now I don't know about you, but the idea of having a saddle in my living quarters seems a little too rednecky! Think of the sweaty saddle pad! And anyway, that space could be used to correct Flaw #3: No refrigerator. Oh come on, non-horsey friends. All of us horse people like frigs in our horse trailer!

So I'm pondering.... I could put a small frig down below the sink like I had in my old horse trailer or upgrade to a bigger refrigerator (with a freezer) and put it in what is currently the tack compartment (which by the way, I don't think ever held tack. It is way too clean.) If I do that, then there is the monumental question: Where do I put the tack? 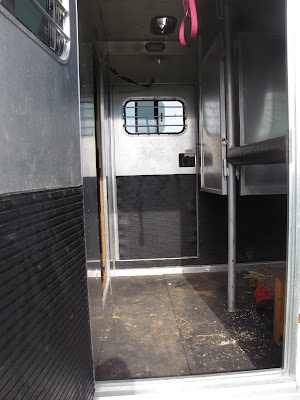 Well, you see, I have plenty of room for storage; it is just kind of a weird set-up. There is a 3' walkway between the living quarters and the chest bar for the horses with doors on both sides. Now granted, the horses' heads have to go somewhere – and trust me, they will - but underneath their head is the ideal place for the saddles.

I think I've figured out how to make that happen. I have a lot of delusions of grandeur that I am pretty sure WILL work, but not the means to do it. I have a husband who CAN do it, but thinks it is rather silly to put a frig in the trailer. "Just use coolers," he says. Well, I don't wanna use coolers! Not that we completely got away from using coolers in the other trailer, but when traveling by myself, I could. I'd just load up that frig and go! Turn that baby to LP setting and I have a cold Mike's ready on demand! 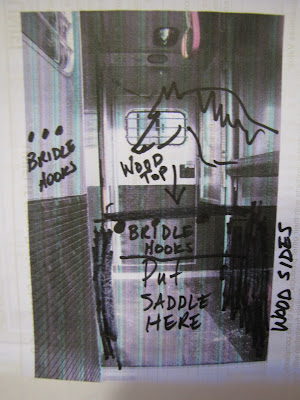 So here's my plan. Build a wooden 3-sided box that will slip into the walkway under the heads of the horses. The saddle can go under there – just need to find some sort of make-shift saddle rack to set them on. Perhaps put some hooks underneath for bridles or put the bridle rack on the door. I can slide the pad between the box and the wall. Or someone else suggested put the pad on the chest bar. The horse's feedbags can go over the top of the box and provide a little stability for that, as well. My friend, Jules, can run a saw. As soon as Flaw #1 is fixed, I need to go pay her a visit. (Jules, take note.)

For the other camping gear and horse supplies, I have put a large tool box back on the truck bed. Most of it fits well in there. So it looks like if I can bring this plan to fruition, it might just all come together. 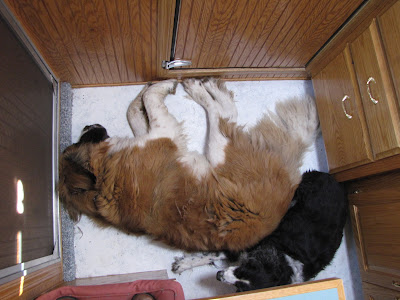 Alright. Who let the dogs in?