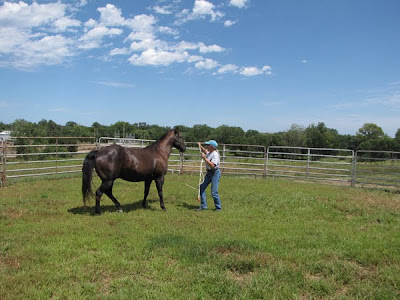 This past weekend, I invited horse trainer, Colleen Hamer of Blair, NE, out to work with my horses on loading in my new trailer. Although they have never had a problem loading in a slant load or a small two horse trailer, the ramp on this new trailer seemed to be causing a lot of concern. Rather than continuing to fight them, I knew Colleen could help them overcome their anxiety of the ramp and load quietly like I expect them to. 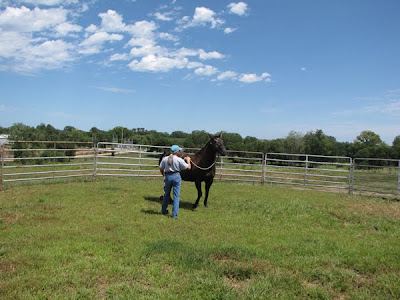 Blue was her first student this day and he is an alumni of Colleen's trailer loading school. Blue has always loaded effortlessly in our 4-horse slant load, but when I bought a 2-horse bumper pull a few years ago, he refused to load. I read the books, watched the videos and was sure I could get him to load. By the end of our session, ropes were broken, there was blood and he had literally thrown himself on the ground and wouldn't move. That's when I introduced Blue to Colleen and during that first session, she had him loading in 32 minutes. It wasn't much longer this time. 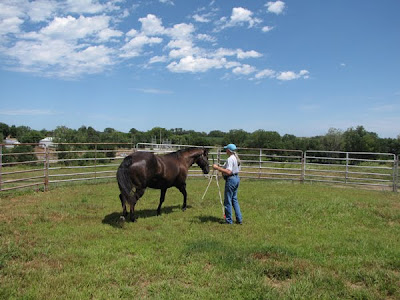 Colleen starts by working the horses in the round pen. She wants their attention on her. She wants to see softness, some flex in their neck, their eye on her, not off wondering what their buddies are up to. Blue was quite stiff when she started working with him, but he soon joined up. 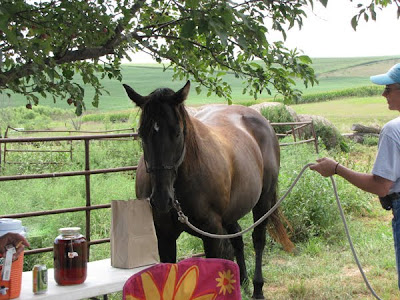 After working in the round pen, she walked him to different areas of the yard and asked him to touch his nose on items she pointed to. What she wanted to accomplish was him going as directed. Blue did very well with this exercise. 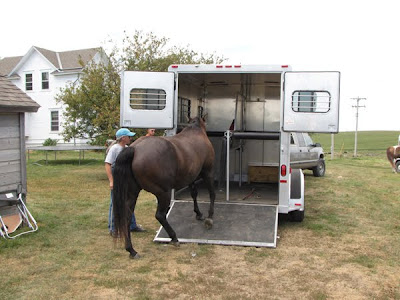 When she approached the trailer, she went through the same process. Pointing him into it, telling him to "load up." A lot of pressure and release on the rope. When he would step back, she would apply the pressure until he let up. Then she would release the pressure. 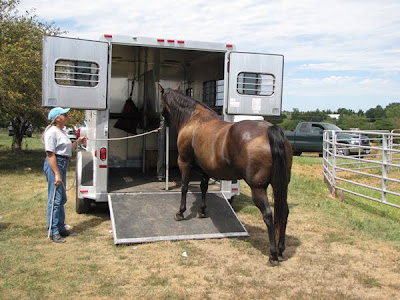 In our small bumper pull trailer, Blue always has to have two tries before loading. He did something similar here. Would approach, stop, back and then try again. A little closer each time. 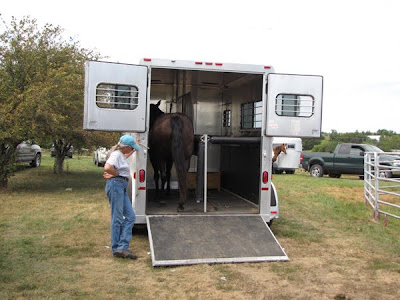 The ramp didn't seem to bother Blue as much as the unknown in a new trailer. But once he was in, he seemed to relax. 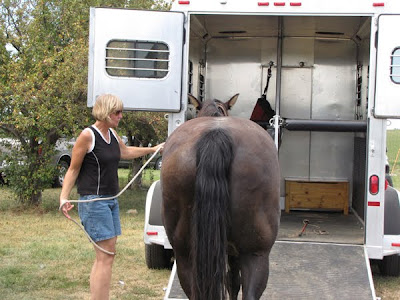 Colleen then asked that I put him in as well. It looks easier than it actually was. Not that trailer loading a willing horse is hard, but she worked with him on some respect issues as well. She wanted to make sure I wasn't lax on enforcing that he honor my space and listen to my commands. She watched my timing so that I released when he released and kept him straight when unloading. 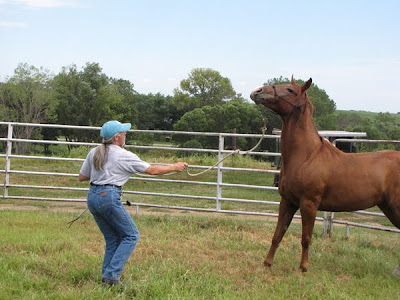 Ginger has never had anyone but us work with her. Oh, there was the person who evidently put 30 days on her before we bought her, but all of her "training", good and bad, was at our hand. She was very tense when Colleen started working with her and really braced against pressure. 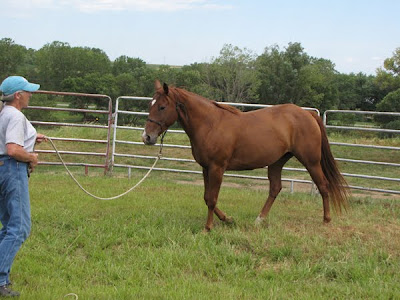 It took a lot longer to get her to relax. She eventually did, but I think Colleen would have liked to have seen more. When she took her out of the round pen, she would not willing touch the items Colleen asked if those items were not easily accessible. For instance, she wanted her to touch a cooler. Ginger would not bend down to do it. She would, however, touch a barrel which was closer to her nose. 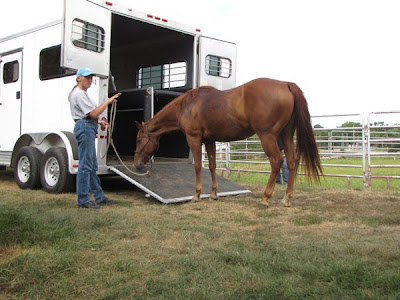 She showed the same resistance when asked to load. Very stiff, unsure. I don't know if I would say scared - Ginger can be very bold - but very unwilling. Colleen kept working with her - keeping her straight and out of her space and focused at the task at hand. 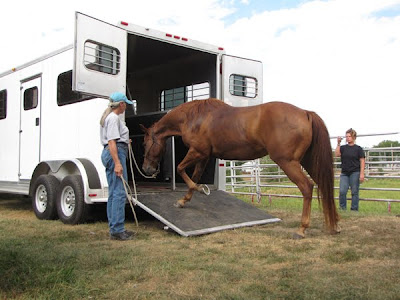 She would advance slowly and then retreat or escape past Colleen. 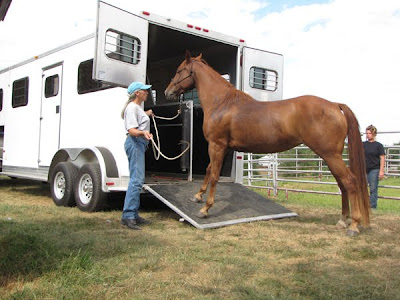 Then she would stop as if to consider what was being asked of her. 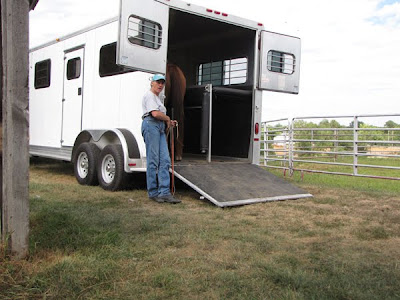 And finally, success. Colleen loaded and unloaded her a number of times and then asked John to handle his mare, as well. 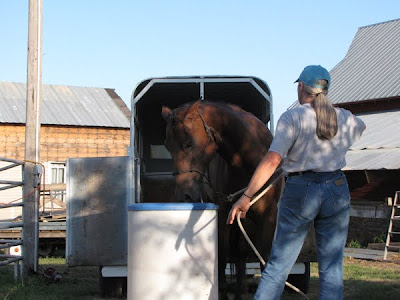 I didn't get any pictures of Windy in the round pen, but she did really well and Colleen commented that she had the best ground manners of all of them. I felt such pride! But, it was shortlived. 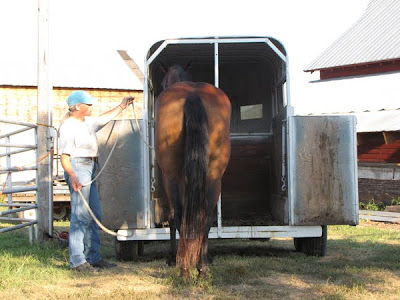 Rather than take her directly to my trailer, she walked by another trailer of one of my guests; a very small two horse. I smuggly told Colleen that she would load in that easily. So Colleen pointed her in that direction. And she advanced toward it..... 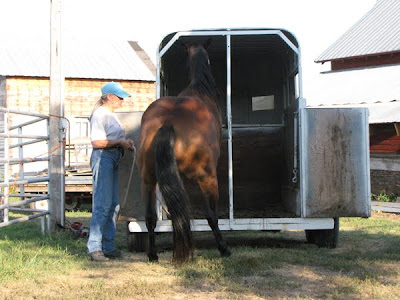 And promptly made a liar out of me! Not only that, her award for the best ground manners went out the door. Not only was she not going to load in that trailer but..... 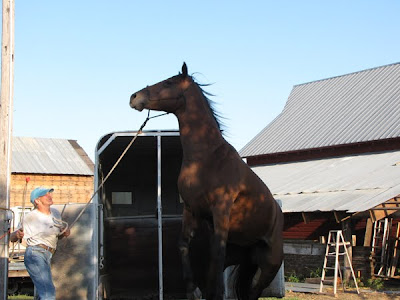 ....hell no! She was not going to load in that trailer. 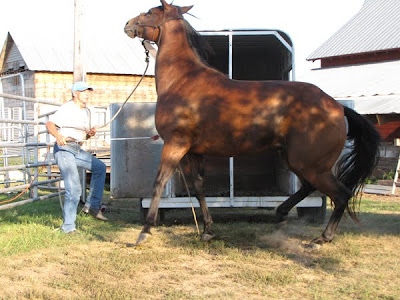 And no way in heck was this little lady going to make her load in that trailer! 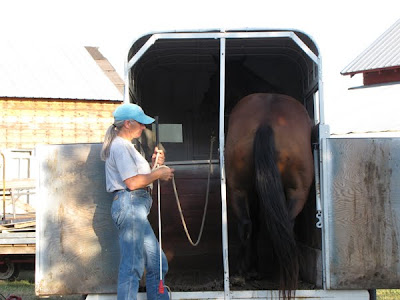 Oops. Think again, my precious Poo Bear. Looks like you lost this round! 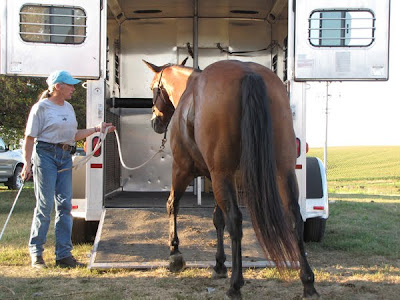 So by the time Colleen pointed her over to my trailer, it seemed the ramp was no longer an issue. 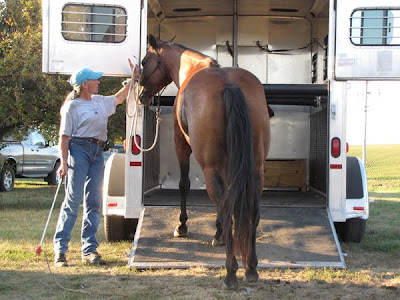 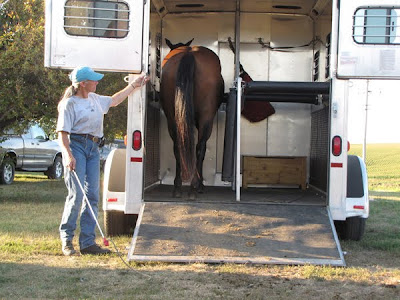 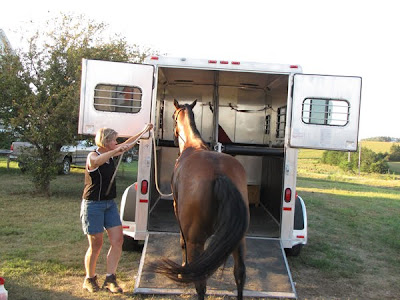 And once again, I went through the same steps with Windy as I did with Blue. 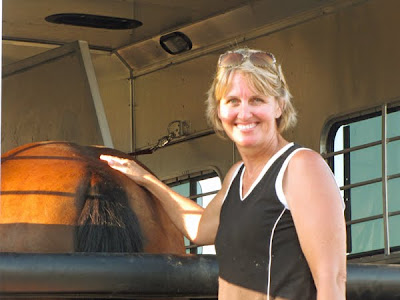 And I loaded my mare.

For the record, since I got my new trailer, I had loaded all the horses in it before having Colleen come out. But none of them (except Butter) loaded easy and I worried that if I were by myself and they resisted, I would have a fight on my hands and no extra hands to help. Having Colleen out to not only load them, but to reinforce some training issues will help set us up for success.

Last night, after all the friends and trainers were gone, I went out to the pasture and brought up the horses. One by one, I haltered them and lead them to the trailer and one by one, they loaded properly for me. A job well done.