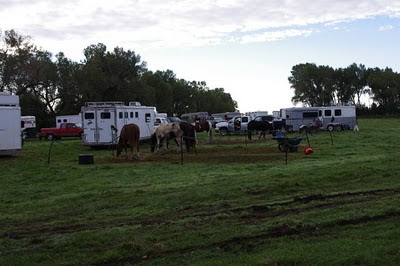 When I turned on my laptop a couple minutes ago, I looked hopefully at the icon which tells me there may be a wireless signal available. Nope. It may as well be saying, "You are in the sticks. Wireless hasn't even been invented out here!"

The first day of Cowgirl Weekend is travel day; getting to where we are going. In this case, about 215 miles from home in north central Nebraska – just a stone's throw from the South Dakota border. The storm expected to go through last night didn't come around until shortly after I had Windy loaded this morning and most of the drive was in the rain. The wind wasn't too bad, so it wasn't a difficult drive except meeting semis on the two lane highways. Sometimes the windshield wipers have a hard time keeping up.

Sharron and I met near Morse Bluff and convoyed, even though I lost her when the railroad crossing guards went down behind me. We communicated via cell phone; she wasn't far behind and she caught up to me when we stopped for diesel shortly before we would be turning off Highway 20. After another 15 miles on a narrow blacktop road, we turned off onto gravel which would take us to the ranch where we would be staying. The roads were soggy and I put Hi-Ho in 4 wheel drive. When I got to the steep dive and climb over the river, I was glad I did.

There were several other rigs in our makeshift campsite when we arrived. Sharron and I found a spot at the bottom of the hill. We unloaded our horses and started to set up camp. It wasn't long until more cowgirls arrived. The wind was still brutal and temperatures still down in the 50's. I was surprised when Kathy started to saddle up for a 4:30 ride.

Now you all know me; I ride. Especially when I came to ride. But the bitter wind was reminiscent of the Friday Before Mother's Day Ride and I didn't want to do THAT again. There were a handful of us that declined to go & those riding out said they would be back in two hours. Hmmm. The first 2 made it 15 minutes. The next couple riders were back in 25 minutes. And the last "die hards" stayed out a whopping 45 minutes. We all agreed tomorrow will be a better riding day. Let's eat. 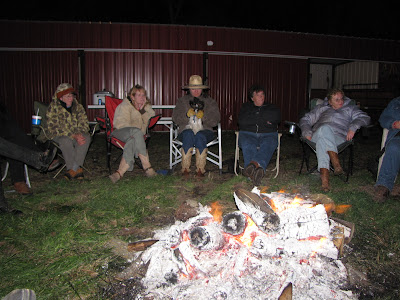 Following a wonderful potluck dinner, we sat around the campfire and caught up on the last 12 months. I realized some time ago that many of these woman I only see once a year; at this ride. So as a way to reintroduce ourselves, we went around the circle and told everyone what we did at our jobs – not out title, but what we got paid to do and also one little known fact about ourselves.

I think many were surprised that Sam is a microbiologist. And that Trudy has been singing with an orchestra for over 20 years. Or that Tanya modeled in Australia right after she graduated from high school and Anita returned from a Safari this past summer. On a more serious note, one of the cowgirls lost a child to cancer while another was widowed when she was pregnant with her 4th child. Three of us are from the same hometown and it wasn't that which brought us together later in our lives, but we became reacquainted through horse activity.

I put a blanket on Windy tonight. If a horse could roll her eyes at me, she would. But she is in a small camping corral with not a lot of room to move; I want her warm. Plus, it's fun to play dress-up with my horse; something the men in my family does not appreciate, but these cowgirls do!

Rather than invited anyone to travel and camp with me, I chose to go to Cowgirl Weekend alone this year. My first solo trip in my new trailer, the bed to myself – the entire space to myself – something I don't get often enough. Right now, my trailer is warm having turned on the propane heater while we sat around the campfire. I won't run it overnight but will fire it up again in the morning as I make coffee. Windy is right outside my window. I hear her chewing on her hay.

I am breathing deep and taking this all in. This weekend is what gets me though another year.