The Rest of the Weekend 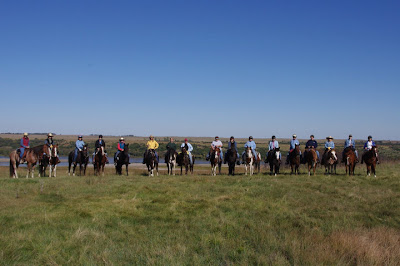 On Saturday, we did a four hour ride along and above the Niobrara River. The river was up so there was no going into it, but the views were incredible. Saw some mule deer and a jackrabbit, something you don't see often (or at all) on our end of the state. Losing Thursday to bad weather sure made Cowgirl Weekend seem short this year. I can't believe we will be leaving tomorrow already. We'll have a morning ride, then brunch and I guess everyone is loading up and going home. Each Cowgirl Weekend, we see some new and different landscape by traveling to other areas of the state, but we sure lose a lot of time to travel, when I'd rather be riding. I'm hoping next year's is closer to home so we can spend more time in the saddle and less and the road. 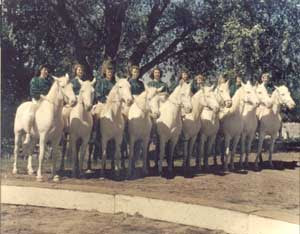 After our ride on Saturday, we all loaded in Joni's trailer and went to the White Horse Ranch museum in Naper. When a Caleb Thompson married Ruth Hackenburg in 1936, they established the White Horse Ranch just outside of Naper and worked to develop the breed they named the American Albino. They eventually established a herd of around 150 white horses which they formed into a riding troupe. At that time, the couple operated a riding school at the ranch for youngsters who needed a helping hand. From that school, the White Horse Troupe was born. This troupe performed all around the country, eventually growing to include such events as high jumping, broad jumping, dressage, bareback riding, and team hurdle jumping. The white horses were known for their gentleness and brilliant color as well as their spectacular tricks. The museum wasn't much to write home about, but I am glad they are preserving that part of Nebraska history. I wish we could have toured the ranch itself, although I am told there is not much left to see. 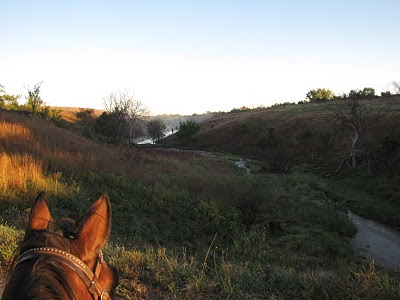 On Sunday morning, we had a sunrise ride and came back to a warm brunch of pancakes and ham. It was then time to pack up and begin the long drive home. Overall, this Cowgirl Weekend was by far the most uneventful. Although I had a great time with this bunch of women, I didn't feel our skills were challenged. I prefer to up the ante a little. In the past, we have done games of skill and even horse polo. Those settings put the group together and could really bring on the laughter. The Hank Williams Jr. song "All My Rowdy Friends Have Settled Down" went through my head as we meandered slowly along the hillsides. Granted, I don't want a Turkey Creek Extreme Ride every time I leave home, but would have liked to up the pace a little more. Other than that, it was great to spend time with my friends and my horse. And I'll be looking forward to it again next year. 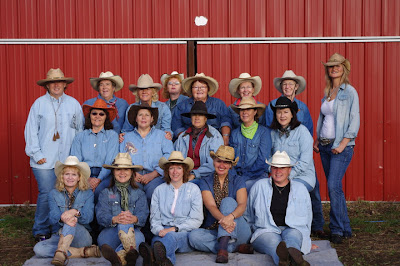 As we were sitting around the campfire, Joni and I were observing our group and started counting those we thought were over 60 years old. Turns out, there were more in the 60's decade than any other group. There were seven women between the ages of 60 and 69 (one not pictured), five women in their fifties, five in my decade, the 40's and only two in their 30's. I hope to still be doing Cowgirl Weekend over the next three decades.