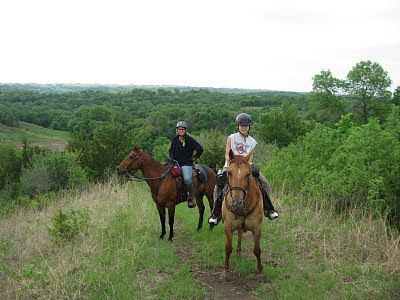 Tomorrow night is the season finale ride for the North Chapter of the Platte River Riders at Turkey Creek near Newcastle. Making up for lost time due to heat and trailer repairs, Kathy & I planned to join this ride, camp over and ride again on Thursday. Turkey Creek is one of my favorite places and the weather has been just perfect. Well, up until tomorrow that is. The last glance at weather.com promises an 80% chance of rain in Newcastle tomorrow. I just can't catch a break.

But looking at the bright side, if we don't go tomorrow, my trailer is cleaned and ready to go for Cowgirl Weekend the following week. And I don't care what the stinkin' weather is doing then. It's Cowgirl Weekend or bust. If there is rain where we are going, I will Google radar maps all around the Midwest until I find a dry place to ride and I don't care if that is all the way to Oklahoma! I am not giving up my Cowgirl Weekend. So there. 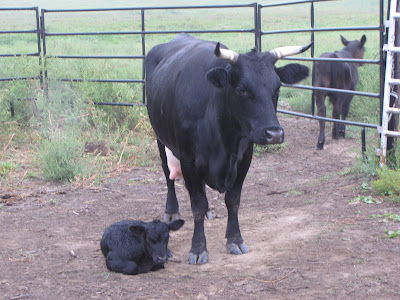 John's cow, Agnes, had her calf last weekend. It was two months overdue. Well, technically not, but it was almost 2 months later than we thought it should be. Her cow-friend, Coco, had hers while we were in Wyoming in July, so we figured Ag would be having hers shortly thereafter. When almost 1 ½ months went by, we wondered if perhaps she had it and it was lost when the creek flooded. Or coyotes dragged it off. Agnes hasn't had a good track record with calves. Being a bottle calf herself, we think her maternal instincts might be a bit out of whack. Last year, she dropped her calf in the pond and if it weren't for Case being in the right place at the right time, it would probably have drowned. And she'd liked to have killed her firstborn. If you've been following Horsetrailriders.com, you might remember this story. If not, it is new to you:

Well, cows aren't the smartest animal in the feedlot. The fact that they are in the feedlot proves that, doesn't it? Coco's calf was born last week during the April cold spell. And both cows kind of claimed the calf. So when the second calf, Agnes', was born yesterday, neither of the cows knew what to do with it, so they did nothing! I discovered it shortly before the kids had to go to school. John is out of town... Yep, it's a dirty job and I have to do it. It's up to me to bond this calf with its mom.

Okay, easier said than done. Especially when one of the cows turns into a Mad Cow. I was horrified as I watched the mama cow head-butt the calf.

I realize this is now a rescue.

It's time to get the calf out of the pen.

Too heavy to lift.

Tried loading it in wheelbarrow & that didn't work either.

So I finally push it out of the pen by its tail.

I called John, but a bad cell phone connection leads me to believe I was on my own on this one.

No doubt I'll be late for work. Just one time I think my boss would like to get a normal phone call from me stating I have a headache or the flu. But every time I have to call in to work, it is never a simple excuse. Once the horses were on the highway; another time I broke my ankle while we were riding the day before. And now I couldn't come in because of an orphan calf!?

After consulting with my good friend and animal science major, Sam, I headed to town to get milk supplement, colostrums supplement and a bottle. Seventy three dollars and 42 cents later (which would of gone a long way at a tack store or bought me a half a tank of diesel fuel), I am back home trying to feed this thing.

Now had this been a foal, I would have been sitting in the manure laden barn with its head on my lap with a team of vets on standby! But this animal is a different story. I have its head pinned between my knees forcing the little beast's mouth open; but it would not take the bottle. (Did you know calves have teeth?)

About 2 hours into the process, John came home. Hallelujah! His cow, his calf. I'm off duty now. I showered for the second time that day and went to work. Twenty-four hours later, the cow is starting to take the calf, provided her head is tied to the post in the barn. Like I said, not the smartest animal on the ark.

This April there is no resemblance of spring. My lilac buds are frozen; the small green leaves starting to appear on our trees are now brown again. The horses haven't shed and are quite unhappy they have to stand in the rain while the calves get their stalls. There is not a foal in sight.