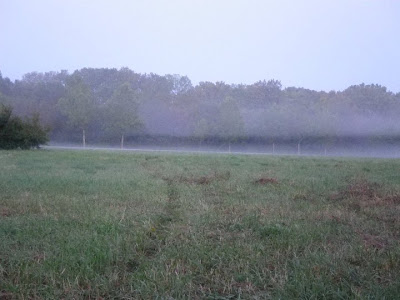 I woke up at 0500 --- before the crack of dawn (potty break)--- and marveled at the beautiful sky that had appeared sometime during the night. When I went to bed it was foggy and overcast and I couldn't see much of anything! Tammy was gracious to share her beautiful new LQ space with me.

Have I mentioned that that trailer could have been MINE? I had talked to the seller prior, when I was still considering upgrading to a gooseneck. Kicking self--- ow, ow, ow!!

So as I was saying, I woke up early. Tammy and Shari had plans to ride out again at 0730 to add more directional signs and take some more stuff out. I had plans to sleep in. But my plans didn't work out. I was just---awake! After they left the camp was coming alive, so I hauled more water to the camel and gave him his breakfast. I swear he never drinks this much unless someone is hauling it to him by hand. There was a big water tank for us with a hose to fill buckets, and a port-a-potty, which was a great convenience. I had brought some water for Cooper with me, but he went through that in a hurry.

I was anxious to get that bridge delivered to its spot. It's a heavy sonofagun and I wasn't sure how much difficulty it would be to get it out of the truck and to its place on the trail. Turns out, with a 4-wheeler and a couple men it wasn't too hard at all! All ya have to do is stand there and direct! Lol. I felt much better once it was there.

People started pulling in around 9:00 or 9:30, I'd say. We started the signing in process at 10:00; Kathy came up with this great little welcome speech, explaining what was in their packet, instructing them to go ahead and put their numbers on and begin on the scavenger hunt right away, since some of the stuff was in camp, etc. She said she got some 'big eyes' from people when she was giving the spiel--- must have sounded like more than they thought they had signed up for! 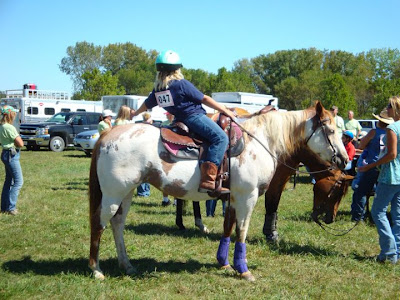 EVERY one we were expecting came. I was amazed, I thought for sure we would have two or three no-shows, but we didn't have any. We got word that one rider canceled that morning, but an extra kid showed up, so she took his place. Amazing. Exactly 50 riders.

We had volunteers all over, everyone was so willing to help, I think the sign-in went very well. Some people were saddled up and warming up and it was only 10:00!! I asked Kathy if they realized that ride-out didn't happen until 1:00? Guess they did. Most just rode around camp, or north toward the lake. I'd given the okay that if anybody cheated and sneaked onto the trail they could be shot in the back (I meant a camera shot, of course, so we could see their number). LOL

At 10:30 we had the judges' meeting, handed out their packets and scorecards, etc, talked about the rules, caught Joel up, since he'd been ignoring his emails. There's always one .... 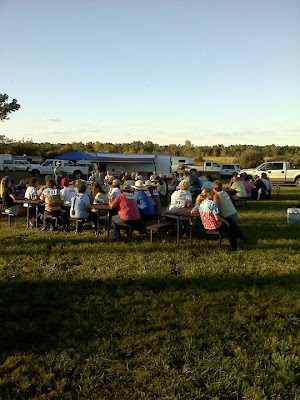 12:30- Ride meeting, explaining the game, the map, answered a few questions. Everybody was ready.

1:00 Mike Reis took Corie and me and all our stuff and all Mary's stuff out to our obstacles. It took us a little longer than anticipated to do all of that, so right after Corie and I had gotten our chairs in place and our drinks out and I was thinking about having my sandwich, Jess and Laurie Werner showed up! It was about 1:20 or so, guess we didn't realize 1) that it was so late, and 2)that it only took 15-20 minutes to get from camp to Obstacle 1! From that moment on we had a bottleneck. 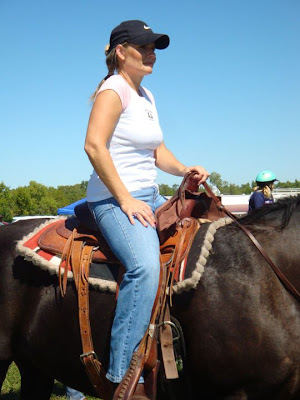 At each obstacle each rider was asked a knowledge question. Mine was: "Name one conformational defect that has another animal's name in it." I bet not more than 1/3 of the riders could think of one! (Can you??) That is a hippology question that the 4-H kids are sometimes asked, according to Shari.

We gave them 10-15 seconds to answer the question, then I read the obstacle instructions to them, then they had 60 seconds to complete it. So each contestant required approximately 2 minutes at an obstacle. Groups of 2-6 people would arrive at a time and wait around for each other, so we gathered quite a few people around our area! I read as fast as I could, but just couldn't make it go any faster! My one regret as a judge is that I couldn't really take my time to write comments (you know how much I like to comment..).

We were busy for about an hour and forty-five minutes..then we were done. Boom. Suddenly everyone was through and Jen and Tanya were there (they followed the last riders). So we packed up, called a cab (Mike R. on his 4-wheeler) and headed back to camp. And by the time we got THERE, the first riders were arriving!