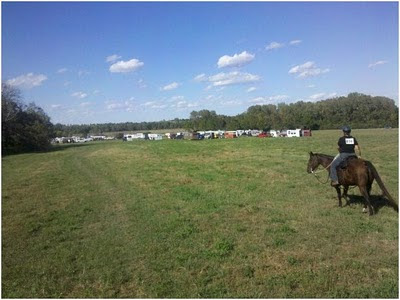 The camp had been nearly deserted, except for Rich Newberg and volunteer, Troy Shenefield. We met Rich on the road, he was headed out to get the food from KFC in Lincoln....he reported to us that riders were already arriving and wanting to hand in their scavenger bags and he wasn't too sure what to do with those. I understand his concern after getting a look at them.

When we made up the scavenger list, it looked pretty cute. Little bits of nature gathered from the side of the trail, a snip here, a sample there. In reality it looked like some crazy person was planning a witches' brew. A pinch of milkweed, mixed with a dead insect, some sumac seeds, and three white berries-- that sort of thing. Oh, and apples?? We asked for an " apple of any kind". You know how many ROAD APPLES we had in Ziplocs? OMG.

So somebody's job was to match the things checked off the rider's list with what was actually present in their Ziploc bag. Heck, when we put it on there we didn't even know if some of that stuff EXISTED on the trail. I was amazed what all was found. And part of the scavenger hunt was "I Spy" style... such as "The rider number of a palomino", or "The license plate number of a pickup with a gray shoofly on the mirror." And there was that Bison Brand trailer question.....turns out it was a red herring, as the people we KNEW would be bringing a Bison trailer brought a different trailer, so everyone searched in vain. Ah well. Kept em occupied. LOL (We didn't do it on purpose, folks, honest.)

The scavenger hunt was a great activity for the hours before the ride actually started. Several people took this VERY seriously-- we saw whole families scouring the edges of the campground, riders accosting strangers to demand to know their ride number, people taking names and license plate numbers. Great way to meet new people! Some didn't even know they were part of the game, .... like Jan Cz. "Rider number of someone wearing a red, white, and blue helmet." Turns out there was only one. :)

Some answers were quite creative. Others were obviously taking a guess! (Lime green horseshoe!! C'mon-- it was pink!) LOL We got a good laugh out of the bag-lady duty. A couple of the kids came and wanted to know where some of the things were, like the "Spy the bird that "doesn't belong" along the trail. What was it?" (the plastic pink flamingo). One said brown thrush. I mean,... far be it for me to argue that, he may be right, but we aren't intelligent enough to actually have that as an answer on our list. Ours were a little more simple-minded! 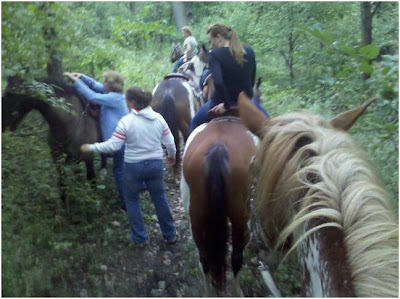 And people were hallucinating. They were seeing giant mice on all kinds of things besides the FLAG that Mickey Mouse was on! So, we ended up with a 5-way tie of the scavenger over-achievers who had EVERYTHING (except the license plate of that Bison Trailer)... so it ended up in a tie-breaker, guessing the number of corn kernels in the jar----which Troy and John Vasa had to shuck and count into a jar. Those poor guys really got a work-out that day, I'll tell ya! Bless their little corn-shuckin' hearts.

Next year we need a longer list--- and a larger Ziploc.

Gosh, I've spent so much time on the Scavenger Hunt, I'm going to have to do a Part 3to finish out the day!