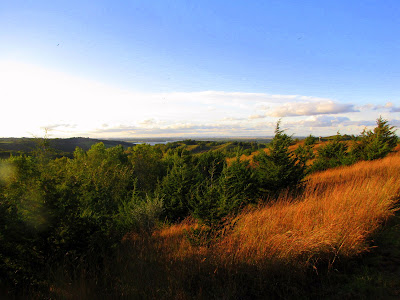 Although not officially autumn yet, this time of year doesn't need a title; it is my favorite time to ride. I love everything about September; the warm days, sweatshirt weather in the evening and the red sumac. I love that the horses' coats are changing again and the winter growth makes their colors so vibrant again and so soft. And in case you are wondering why I love fall so much when I know what follows… well, I'm in complete denial about that: Live for the day.

This time of year is why I save my vacation days. When my boss got my "out of office" notice when he sent me an email, he replied, "Everything okay?" I reminded him it's time to ride and he authorized it. And while I was at it, I reminded him that this coming week is the beginning of Cowgirl Weekend and I'll be gone again!

Kathy and I made plans last month already to go to the Platte River Riders North's final ride at Turkey Creek near Newcastle this past Wednesday, contingent upon my trailer being fixed. It was, so we were going. We watched the weather on Tuesday and it didn't look promising, but come Wednesday morning, there was just a 40% chance of afternoon showers and clear that evening. That wasn't enough to worry us and we started out later that afternoon for the 2 hour drive north. And par for the course, about 3 miles from Turkey Creek, a black cloud from hell fell over us with such heavy rains and hail, it forced us to pull over. It didn't last long, but the roads were saturated.

As we reached the turn-off for Turkey Creek Ranch, I was a bit apprehensive as the 4WD has been out on the truck since the Wyoming debacle and I knew it would be hairy getting in there without it. I apologized in advance for the ride I was going to give the horses going in and then I gunned it. We went down a short hill, took a sharp turn left and then another sharp turn right and up a steeper hill. With the petal to the metal, we made it! 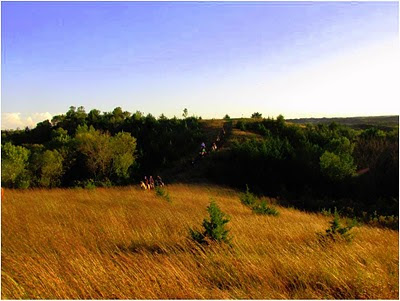 Turkey Creek Ranch is nestled in the bluffs on the Nebraska side of the Missouri River. The trails weave through the trees offering some climbs to the top for awesome views of the river and into the neighboring states of South Dakota and Iowa. The rain didn't dampen our spirits and it had been dry enough that the group thought that although the surface of the trails may be wet, the base should be good. Okay, that is what we told ourselves. We tend to lie to ourselves when we want to ride. The proprietor, Brenda Wortman, did not choose to ride with us. Something we all took note of later over the campfire. 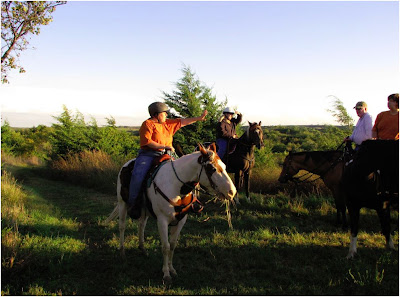 We started down a muddy trail weaving through the trees with a mild ascent up the nearest bluff. I was maybe 3 or 4 horses back and could see horses in front of me struggle with their footing, so I would move Windy to the grassy part of the trail. She was more interested in the long grass than where she was walking and once at the top, the views, as always, are to die for. 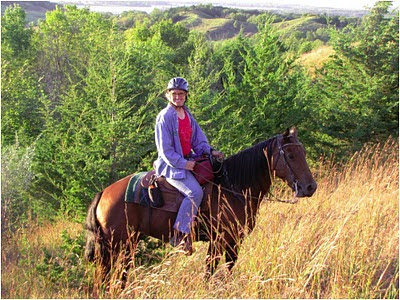 After taking some pictures, we moved on along the ridge of the bluff. Every once in a while, I would glance behind me and see the other eighteen or so other riders following the trail. No one seemed to have any issues with the footing. 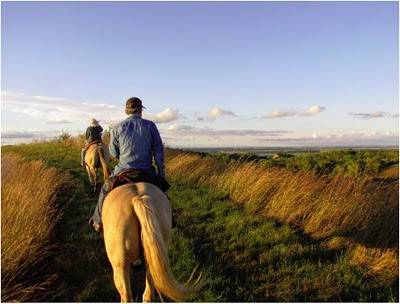 It was along this time that we evidently missed the turn we were to take and started to go down a hill. It was a little steep and a little slicker, but we got our footing again at the switchback. When the group got to the bottom, there was only two ways out and both of them took us back up to the trail we were just on. I rode ahead with two other people to check out the second trail to save us going back the same way. It looked good and before long, we all made it to the top again.

Off to the right was another mowed trail. We assumed this was the one Brenda had told us to take originally and we had missed. It was grassy with a slight decline; it didn't look at all as ominous as we would later reflect upon. Doats and Eric started to lead, Sam was behind them and I followed Sam. Kathy was right behind me. 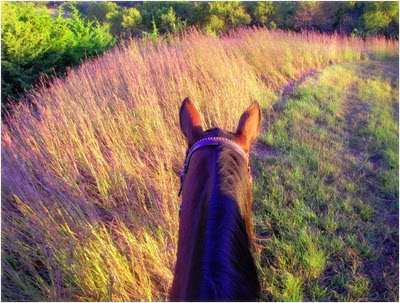 I'm told that when Doats has a concern, we should listen because as a seasoned rider, she rarely complains. We heard her say "Oh, hell" and she slipped out of view about the time I saw Sam's horse, Apache, begin to slide. I thought he was going to fall to his hip. Windy went off to the right of Apache and when we were at their side; she hit the same greasy spot as he did and started to slide. I grabbed Sam's arm momentarily as if she would save me from where I was going. In a movie, we would have grasped hands until we could no longer hang on. But on the side of this bluff, I grabbed my reins again as I slid past her. I hear Kathy yelling at the others behind us, "Go back, Go back". I'm not sure if she really said "Save yourself!" or if that was embellished at the campfire, but we were all thinking that.

Windy got really big. In my mind, I envisioned her sitting on her butt with her hind legs sliding under her and her front legs between her hind legs trying to keep us from losing control and falling backwards. I remember looking up at her long neck and it seemed too close to me; almost parallel to my body. I think my feet were close to touching the ground, maybe even dragging, but I didn't look. My camera was around my neck. I wish I had the mind to hit "record", but at this point, I was "saving myself." We were going down (the hill that is) and it would be up to Windy to get me there safely. I had no control anymore.

I don't know how far we slid like that; maybe 20 feet? And it wasn't straight down, but there was no place for the horses to get traction so we kept on sliding. The horses just dropped to their hindquarters and let their engines take over. As we reached the bottom and solid footing, I hugged Windy around the neck and then turned to see Sam reach the bottom safely, too. Kathy was still chattering and sounded a bit panicked. She wasn't sure if her horse, Zuni, was falling or had it under control, so Sam and I assured her that Zuni was doing fine and she should let him finish the descent. A rider behind Kathy dismounted as his horse was about to slide into Zuni and that felt like the thing he should do to get control of his horse.

After the six of us were safely down, did we all start talking at once? The adrenalin was flowing, I know that! We weren't sure whether to high-five or drop to our knees and pray! I think we did a little of both. It seemed so dark down here in the trees. Like we lost what little sunlight we had going down the trail of hell. We all agreed to stay below and we started to work our way through the trees and back toward the trail head. 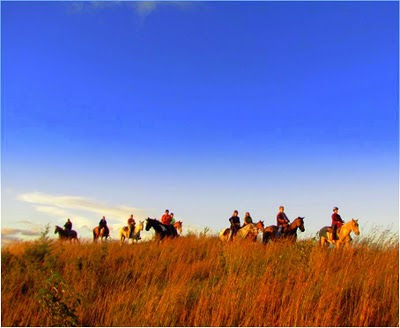 The riders who "saved themselves" had their own stories to tell which included a loose horse and more slipping and sliding. Around the campfire later that night, we all exchanged our "where were you" stories and the tales grew taller, no doubt. But let me tell you this, I never loved my little mare more. My heart was in my throat as I surrendered control to her. And she never let me down – literally or figuratively.