We Pulled It Off 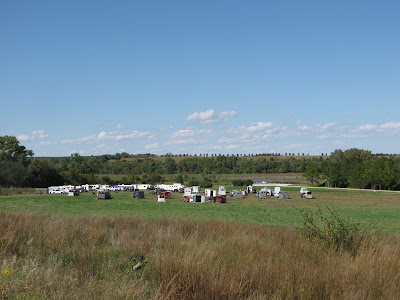 A few years ago, in preparation for an upcoming Competitive Trail Ride, I attended a "mock" CTR put on by NECTRA, the local distance riding club. To give us a good flavor of the sport, they set it up as if we were really attending a Competitive Trail Ride. From having our trailers set up for camping to the vet checks. Then we were provided with a map and we saddled our horses and started the ride. Along the way, they set up obstacles that we might see on a CTR. Those few hours were to give us a taste for the sport. And it did.

Following that ride, I couldn't help but think that this one day, shortened version might appeal to a group of riders who aren't interested in distance riding or speed or camping or the long miles. A shortened version like this mock CTR might be just enough for a certain demographic of riders. Those who just want to spend an afternoon trail riding with their horse, but perhaps up the ante a little bit.

Last year, a fairly new organization came along and started sanctioning a similar type ride. Follow a trail, attempt obstacles along the way and call it a day at the end of the ride. The one scheduled nearest to me did not come to fruition. Cost? Although the entry fees weren't terribly bad, the additional required membership fee made it more spendy than I wanted to pay for a day ride. Then to further dampen my enthusiasm, their affiliation with what I believe to be a "faux" rescue group left a sour taste in my mouth. I'm from farm country. Beef, chicken, pork and the grain that feeds it is our livelihood. I won't support an organization that threatens our way of life.

Meanwhile, each year The Nebraska Horse Trails Committee hosts a game day to raise funds for our organization. Although always successful, wouldn't a "trail challenge" be more geared toward trail riders? And there is no law that says it has to be sanctioned by any organization. I know how to stinkin' trail ride! I got together with my friend Shari Parys, who organized the mock CTRs and Sheila Christiansen, who had as much fun at the mock CTR as I did and we started brainstorming about putting on a ride such as this…. A trail ride. Obstacles. How about a Scavenger Hunt and I Spy? It could all be done in an afternoon. Could we get 25 or maybe 30 riders? All we had to lose was our time. And we went for it!

If you build it they will come. Yesterday, fifty riders entered our 1st Annual NHTC Trail Challenge & Scavenger Hunt and it was 100% successful! Wow! How often does that happen on the first try? Oh, sure. I won't get so cocky as to say there weren't hiccups along the way, but the success of this ride was measured by smiles. watching the horses entered in the competition, you would think none of them ever had a bad day. And judging from the grins on the rider's faces and the laughter on the trails, I believe they felt it was worth their time and donation.

Sheila Christiansen has a beautiful way of telling the story. The next few posts to this blog highlighting the event, will be hers.
- September 12, 2010