The First Day Out 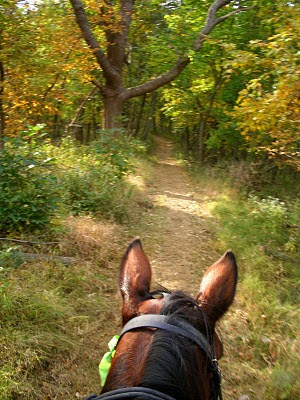 I was awake before the alarm went off and could hear the campground was coming to life. While taboo when camping while pleasure riding, generators started buzzing to provide lighting, coffee and other necessary comforts. My trailer is pretty self-contained and most everything I need runs off battery or propane. With that said, I started my propane burner to brew some coffee and threw Windy a few flakes of hay while I started to get dressed.

While at Cowgirl Weekend we had heaters going, this weekend was very mild. I had slept with the windows cracked in the trailer and put on regular breeches rather than fleece. I dressed in layers, slipping on a tank top, a long sleeved shirt and a sweat shirt to keep the morning chill away. I pulled out snacks for my saddle bag: a Special K bar and a couple Oven Ham Sammies I made special for the occasion as they pack very well in my pommel bag. 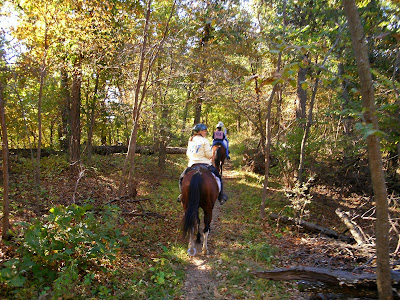 After saddling Windy and meeting up with Shari, we rode over to where the riders were being timed out. Diane, another Horsetales friend, met us on her Rocky Mountain mare and would ride out with us. Before long, our numbers were called and off we went with Diane in the lead. Windy felt great, albeit pushing it a little more than I would have liked, trying to close the gap between Diane and me. It was obvious the gaited horse was moving faster than my quarter horse and Diane disappeared down the trail. A couple other riders on gaited horses passed us, and before long, it was just Shari and I, followed by the safety riders.

We did a lot of trotting early that morning and were still struggling to beat the clock. And before long, we found ourselves at the first judged obstacle. It was simple, really. Ride your horse up the hill to the judge. Stop your horse and count to five and continue on down the trail. I rode up and whoa'd Windy. I counted. One, two, three, four…. And she tossed her head. Dang! So much for standing quietly. See? These easy obstacles aren't that easy after all! We were later asked to back uphill. Windy showed some resistance, but got the job done. 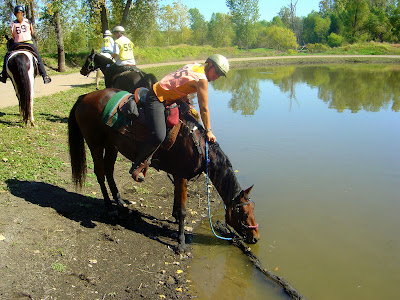 About two thirds of the way into the ride, we reached an intersection in the trail. The ribbons showed the trail going off to the left, so we went left. Before we got a hundred feet, someone riding up behind us yelled to us, "You are going the wrong way!" We stopped. We looked at our map. We looked at the ribbons. It's possible the ribbons are there for tomorrow's ride. The map is confusing. But Shari said the rider who warned us is not one who makes mistakes. We changed our course and were back on the right track. That wrong trail would have taken us 1.3 miles out of our way and over the dreaded hill known as the "thigh master."

We finished the ride just under six hours, traveling over 21 miles. Once back at camp, we had an hour to get our horse ready to show again to the judge. I mixed Windy up some wetted mash to keep her hydrated, freshened her water bucket and tossed her a flake of hay. As she ate, I filled a bucket with soapy water and starting with her legs, began to clean her up. I removed the saddle and gently sponged her back and neck. I brushed out her tail and braided her mane. My trail horse was now show quality and ready to present to the judge. She checked out with 5 zeros and a 3+. Close enough to perfect for me. 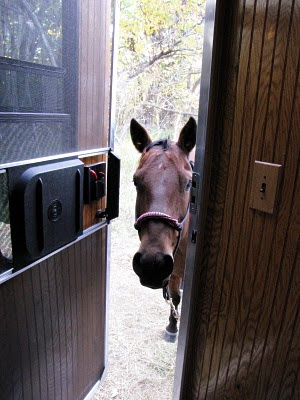 At the ride meeting that night, they told us to be ready to trot out for the judge at 7:00 AM or first light. Since we were starting a little earlier, I returned to the trailer to prepare for the next day. I packed the snacks into my pommel bag and put full water bottles on my saddle. I laid out the clothes I was going to wear the following day. Windy would occasionally stop eating and look up to see what I was doing, most likely to see if I would share any snacks. I put a light weight blanket on her and shut out the lights before 10:00. I fell asleep shortly after I hit the pillow.