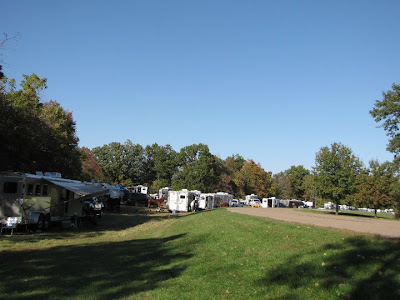 I left for the Indian Cave Competitive Trail Ride last Friday morning. Doing a quick inventory of what I packed, I realized too late that I had forgotten my laptop and had too many miles behind me to warrant going back. I so wanted to post each night about the ride. It's now several days later and I find myself struggling to start this post. It's so much easier when it is fresh in my mind.

There were about forty riders competing. Since they place the first 6 in each class, I was hoping there would be at least 7 in my class. I like to have something to work for and not just a "gimme." There ended up being around 9 or 10 in my class; I'm not 100% as it kept changing right up until ride time.

Shari and I had a brief ride on Friday afternoon. The weather was spectacular and the fall colors inviting. We only climbed a few of the many hills along these trails, testing what kind of horse we had under us but not wanting to push them before the actual competition. Windy felt relaxed and ready; a good place to be. Back at camp, we groomed our horses to get them ready to present to the judge.

When showing to the judge at a CTR, I always have to make the difficult decision if I show with a whip or not. I can get much prettier lunging circles out of Windy when I use a carriage whip or carrot stick, but it is awkward for me to carry. I decided to pass on the whip. She stood nicely for the vet judge and when I circled her, she presented herself willingly, although her transitions from left to right were awful. Fortunately the horsemanship judge did not hold that against me. Her baseline was set at 5 zeros and a 3. The zeros represent her metabolic scores, (gut sounds, hydration, capillary refill, etc.) I was told at zeros they are where they should be. On a scale of 1 to 5, her willingness and attitude was a 3. If that number stayed the same or went up to a 4 or a 5 at the next vet presentation, that would be good. We just didn't want that number to go down.

At the ride meeting that night, we learned we would be riding 21.6 miles the first day. I believe minimum ride time was 5:25 hours with a 5:55 mid-point (don't quote me, I am running off memory here). There would be no lunch break. This concerned us for a few reasons and none had to do with our own stomachs. Mainly, it is October in Nebraska. The temps have been in the 60 – 70's and the horses now have their winter coats. The weekend temperatures were predicted to be in the mid to upper 80's, unseasonably warm. We felt the heat on our newly coated horses, in addition to the long hills on the trail, would be adding a lot of added stress to the horses and they could certainly use some down time mid ride, but in the end, it didn't matter. The horses did remarkably well, despite these conditions.

Shari and I strategized that night about our ride. We would start at the back of the pack. Trot the flats in the early morning so as the day got warmer, we wouldn't need to push them as much. Whichever horse leads out the best, would lead; we would switch as needed. The pace of our horses, Wiley and Windy, were pretty well matched. If another rider joined up with us, we would not change the pace of our ride to that horse.

The ride would begin at 7:30 AM the following morning.