The One That Got Away

I went to the local horse sale today. It is much more of a social event than anything else as it is a place where many horse people gather. I haven't bought a horse since 2005. I do not NEED another horse. WE do not need another horse. I am the only one that rides with any regularity around here and it is hard enough keeping time on my two (Windy & Blue) and Case's Butterscotch. And I do like riding Ginger every now and again.

So I go to the sale, pick up some tack and then went out to walk the pens for a bit. Being that it is a local sale, there are usually people I know that I stop to chat with as I make way down the aisles. I try not to look at the hard luck case horses; skinny, unkempt… just plain unloved. There are just too many to save and with shame, I look away. (If only I could win the lottery… )

They aren't all bad; there are many that are saddled, being ridden by their owners or prospective buyers and you think to yourself that those may just stand a chance.

"Loose stock" is those horses that are dropped at the sale by their owner. Their owner may or may not have left pertinent information about the horse. Many times they are just young horses that have been out to pasture that are being unloaded for the winter. I speculate on why others are dropped off. None of it pretty. As I made my way down that aisle to go back into the sale, one horse in a loose stock pen caught my eye…. 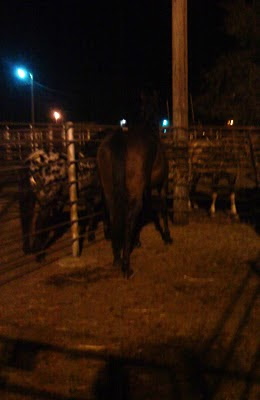 I have always been drawn to the long, lean horses. Thoroughbreds, appendix bred quarter horses or quarter horses built like my Windy. I pegged this horse for a thoroughbred and figured it was a mare; it had the prettiest head and face and as I prefer, not a speck of white. As I approached, I checked & was surprised to find a gelding. I slipped into the pen and moved its stable mate aside. I stroked the neck of the tall black-bay gelding, picked up his feet one by one. Looked him over top to bottom. His legs looked clean, good back. When my friend joined me, I turned up his lip to have her look for a tattoo which you will find on a thoroughbred that has been raced, and there was none. I was kind of surprised.

As far as the sale goes, this horse had two big strikes against him. One, he was in the loose stock pen so no one would be presenting him in the ring. As a result, hewould be looked upon less than favorably by those buying as there is no history on this guy. Secondly, he was a thoroughbred. Like it or not, this is quarter horse & paint country. Thoroughbreds around here are seen as throw-away race horses and just don't get the same kind of bids. The gelding was, however, in good condition. He had a couple questionable spots on his hooves where he may have had contusions which blew out or maybe an abscess; nothing that concerned me. I was in lust with this horse, but like I said, I Do Not Need Another Horse. And I left the pen.

A little later, John showed up at the sale. I couldn't stand it and told him about the black bay gelding. He said he sounds too tall for bushwhacking and I laughed and said he was. But I also said he sure seems quiet. Finally, I asked John to come out and see him. This time, I borrowed a halter from a nearby horse and led the gelding out of his pen. His manners were impeccable. I found a flat area and asked him to lunge. With just a tiny lead rope, I could not get big circles but could see he moved nicely and appeared sound. John swung his belly over the geldings back without reaction. A man and a woman stopped to watch & asked me about "my horse." I told them he wasn't mine but I worried he would end up on the "truck". They asked if I was concerned about his hooves and I told him I was not and that I thought he was a nice horse. Another acquaintance stopped by and said he knew that horse. That it was used to pony racehorses at the track and it was "broke, broke, broke". Hmmm. After a short chat with John, I got the green light to "save" him if it looked like his future was "heading south".

Five years have passed since I bought my last horse. I have to admit I was getting the "new horse fever" and even emailed a few friends that I was going to bid on a horse. When he came into the sale ring, the auctioneer asked for a $300 opening bid. I waited. They never get a bid as high as they ask for. Finally, someone opened at around $200. I did not bid. Two other people were and had raised it quickly to $270, $280… and then $290. The couple I had spoken with when lunging the horse had the bid. He wouldn't go to kill. John looked at me questionably wondering if I was going to bid. I didn't raise my hand. The horse was safe from the kill buyers which was my goal. So I let him go.

I have to admit in that hour or so, from the time I saw him until I lost him, I had dreams of taking English riding lessons, dressage, jumping… he would have been the perfect English horse. In reality, he probably bucked like a sonofabitch and it was a good thing he didn't come home with me. (Big sigh….) Yeah, I'll keep telling myself that.