It has been a perfect October in Nebraska. If we were asked what October should be, this is it. Clear, sunny skies and mild temperatures; a perfect harvest from what I hear the farmers say. Oh, we had a few days that were windier than anyone liked, but when you are stuck at work, that’s not a bad thing. The weekends have been kind to us. Every day we get like this is stealing time from winter. And after last year, that bit of thievery is just what we need. 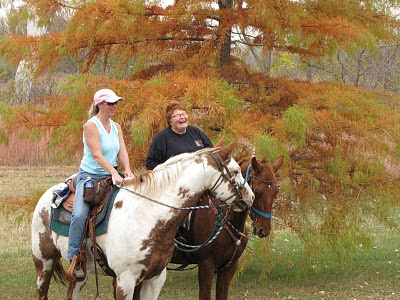 Last weekend, I trailered out a couple times. The first day I took Blue. Oh, my! I think he has put on one hundred pounds since I was riding him in August. He must be getting ready for winter. He was a good boy and Kathy, Julie and I had a nice time on our geldings. The trees lent themselves to some great photo ops, and no, that’s not a dead tree, but some sort of deciduous pine. It sheds its leaves in the winter unlike most other pine trees. I love Kathy’s laugh in this picture. It’s reminiscent of the entire day; lots of smiles, laughter and friendship. Julie and I rode again a few days later. Another eight miles down and back on the Rescue Road. 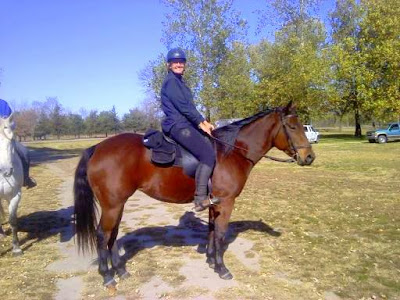 This past Friday, I met Mary and Sheila at Two Rivers. Sheila was anxious to try out her new English saddle. So in keeping with the theme of the day, I saddled up Windy in my black dressage saddle. None of us remembered to throw in cameras, but did get a crappy cell phone picture. I could spend a lot of time critiquing my riding form from this one picture. Ultimately, I hope it was just a bad shot and I really don’t ride as bad as I look just posing for a picture. We rode for a few hours through the public sections of the park; the wildlife area closed through January for hunting. Despite the lack of leather between myself and my horse, I managed to stay on top.
As much as I wanted to trailer out yesterday, there were more chores to do around here. We had no time to prepare for winter last year, so we have to take a little time now. Last weekend we worked on cleaning the corrals and getting the fences ready when we finally have to bring them in from the pasture. Yesterday we loaded the truck with debris to take to the dump. When John and Case went in to watch the Husker game, I stayed outside for some horse time. 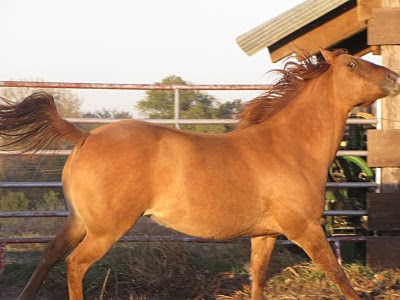 I pulled Butter from the pasture. She has only been ridden on a couple of occasions since we went to Wyoming in July, so she was due. The bad thing about Butter is she is terribly buddy sour. I hoped for a short ride in the pasture, but after I let her run off some steam in the round pen, I thought better of that. Instead, I saddled Ginger and ponied Butter. It went pretty well and I even managed to ride out a pretty big spook by both horses when we flushed up some deer in a neighboring treeline. It's funny how fast your mind works. I truly thought I was a goner and was hoping for a soft landing. I was very glad I wasn’t riding in the English saddle for that little incident.
Case and I went to town last night and saw the movie Secretariat. I had read a lot of online reviews; most saying it was a good movie but that astute horse people could find flaws. I decided not to look for any and to enjoy the movie for what it was and I did.
- October 31, 2010