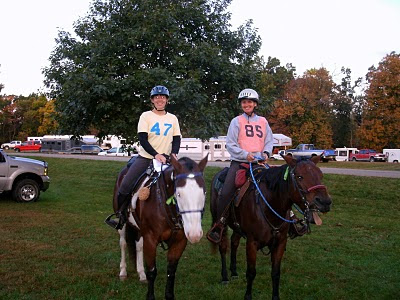 I awoke again without the alarm. As I climbed out of the bunk, Windy nickered. With this new trailer, she ties real close to the door to the living quarters and knows when I'm moving around. I tossed her some hay and started my coffee. Trot out was at 7:00 AM. Shari and I wanted to have a little time prior to that to warm our horses up. It was still dark as we rode away from our trailers.

I was pleased to find I still had a lot of horse under me. Windy was moving quickly and without effort down the trail. Before long we came to the first obstacle. There was a line, so we assumed this one would be a bit more difficult. She snacked as we waiting our turn.

Once in front of the judges, we were asked to back our horse between two trees and once there, sidepass to the left to exit. How many times have we practiced backing through trees? Believe it or not, lots. It is one of those CTR obstacles you hear about, so it is one of those things we try for fun when pleasure riding.

I lined Windy up in front of the trees. Before I could cue her, she reached above us and took a mouthful of leaves from the tree. I decided to show patience to the horsemanship judge. I let her tear the leaves off the branch and begin to chew and then cued her for a back. She jerked her head out of my hands and reached up for a second bite. She was getting pissy! There was some name calling going on in my mind, but rather than voice my dissatisfaction, I moved her out from under that branch, repositioned her and asked again. She went a little light in the front before her hind-end kicked in and she backed. I cued her to sidepass and she must have done that okay because my scorecard had a "good" following the sidepass, but we lost a point for the back. (Big sigh.) 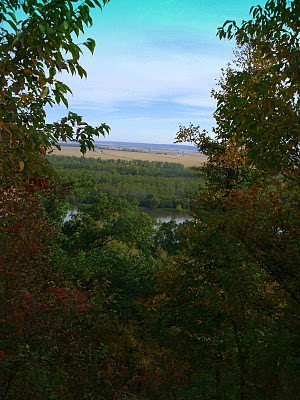 Shortly after the "thigh master" hill, we had to stop for a pulse and respiration check (P & R). Once dismounted, volunteers come to your horse and record their vitals. You then wait ten minutes and the horse is rechecked. It is that recheck number that you want to be in the acceptable range. Only once throughout the weekend was I concerned and it worked out okay. This time we had just climbed the highest bluff in the park and I hoped she would recover easily from it and was thrilled when she did.

We continued on to the horsemanship judge. He asked me if I had a knife in my saddle bag and if I did, to cut his twine. I did. He then asked if I had a hoof pick on me. Yesterday I did. Today I did not. I have twenty two hoof picks in the trailer and not a one on my horse. He didn't ask to see it, but I cannot tell a lie… I lost a point there.

As we closed in on the fifth hour, we rode into camp and across the finish line. We went through the same routine as the day before; grooming and presenting our horses to the judge. Windy checked out once more all zeros and a three. I was ecstatic over having such a wonderful two days on my good mare and having her come in fit and sound made it even better. We took care of each other.

The score cards would be handed out after the awards ceremony and I was anxious to see it. I had one honeycrisp apple left and told Shari if I get a higher score than my horse, I get the apple and if Windy's score is higher, the apple is hers. In our three previous rides, Windy has scored higher than I did, so I figured if I didn't come in at 6th place, I didn't place. I was shocked when they announced that I had placed 4th. Now fourth may not be a big deal to all of you, but it is as good as being the winner in my book. I never did sports in school except the required tests. To think that I rode my horse for 11 hours and did it well enough to place, was over the top for me. If I never place again, I'll die happy with my fourth place honor. My friend, Shari, took 2nd place in her class. 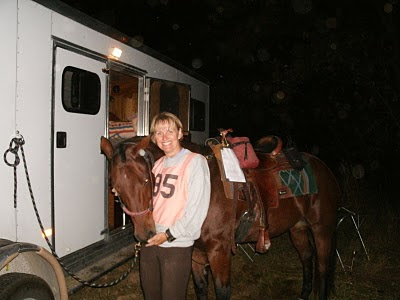 After the horsemanship awards, they started through the classes once again to announce the horse placings. When Windy hadn't placed in 6th, 5th or even 4th, like me, I figured her temper tantrum when trying to eat leaves during the obstacle had taken her out of the game. I would get the apple. When they announced the 2nd place horse was Windy, I about died. As a parent, we want for our kids so much – it's a given that we want for them more than ourselves. And the feeling I had for my horse at that point was not unlike that I have with my children; such pride. She did it. No, she didn't win. But she got SECOND PLACE! You'd think she had won the Kentucky Derby. I couldn't have been happier. The honeycrisp apple was hers.
- October 15, 2010