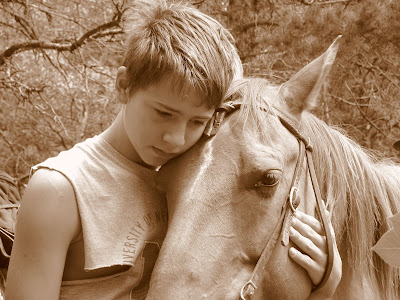 Butter needs a rider. I think "her boy" has ridden her once since we were on vacation in July. The last few times I have thought about taking her anywhere, she copped an attitude. She thinks she is still on vacation. So I would lunge her to get a real gauge on her potential performance, she would literally throw a fit. I’d work her in the round pen, unsaddle her and go get one of the other horses to ride. I ain’t no fool!

So yesterday I take the camera out with me and go through the same motions of getting her ready to ride; so sure that I would have some butt-kickin’ video to show you. But alas, she just wouldn’t perform to the camera. Oh, she threw in a few bucks and kicks, but nothing like the last few times.
Laughing… my lunging efforts are lame at best. Holding a lunge whip and running a camera – while watching where those back feet were - was quite an effort in itself. (I added music to the video because the wind was bad & I hate hearing my own voice.) I did have John come out and ride the buck out of her before I got on her. She did have some attitude, but settled pretty quickly. After that, I felt safe enough to get on. I didn’t ride her long but enough to get my groove back with her.

I’ve missed riding the Butter-ball. Standing only 14.2hh, she is very well put together. I’m 5’9” and have never felt too big on her. And she has the cutest, smoothest little jog trot, something my mare is missing. She can be a fun ride.
This video of Case riding Butter was taken in 2007. Boy, she has packed on the pounds since then (and my baby was so little!) If ridden regularly, Butter stays pretty focused. But since that isn’t happening too much now, she is pretty barn & buddy sour. She has also picked up some bad habits along the way from always having a child riding her and not correcting her fast enough.

She's not for sale. I keep thinking perhaps I should lease her out so she gets ridden more consistently but she needs ridden more consistently before I’d feel she was safe enough to be leased out. The endless circle. I am not sure I have the gumption to put the time on her that she would need; I have a hard enough time finding the hours to ride my own horse. I haven’t ruled out having a trainer put some time on her either, but then the circle spins the other way and we would have to rides on her to keep her consistent after she came back from the trainer. 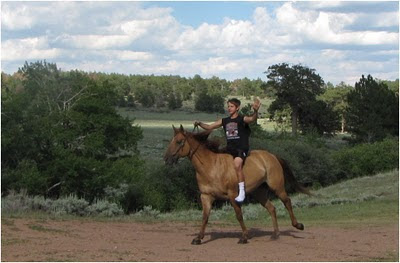 I keep thinking in my huge circle of horse friends that there is someone out there who is horseless, who has experience, who enjoys a challenge and wouldn’t mind putting some time on a horse that is rusty but otherwise trained, in exchange for having a horse to ride again. I haven’t found that person but I guess I haven’t asked. Maybe I should…. I wonder what her boy would think?

Email ThisBlogThis!Share to TwitterShare to FacebookShare to Pinterest
Labels: Butter