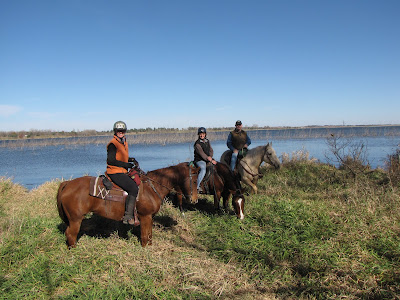 One of the Pioneer Woman's blogging tips is to "blog often". Sometimes that is easy; I have so much to say. And other times that is so hard. Not that I have nothing to say – gosh, I always have something to say – but I lack time or a theme. Or worse yet – pictures! I think I have said before how I hate posting without pictures. And it is not that I haven't taken any, I just haven't had any GOOD pictures lately. I really need to start concentrating on not just capturing the moment, but setting it up and making it a picture perfect moment.

The snow hasn't found us yet; still hanging in the 60's and low 70's. Usually I am crying about "gray November" right about now, but there is certainly no complaints from me this year. I told John this past weekend that I was going out to play and he couldn't stop me, and I rode every day. On Friday, I took Windy out and we just rode around here, but the rest of the weekend, I trailered out.

On Saturday, I met Jules, Steve and Joni at Branched Oak. Being that they are westerners (Hastings, that is), they have never ridden at Branched Oak before, so I had the opportunity to introduce them to these trails. I took Ginger for a little change. 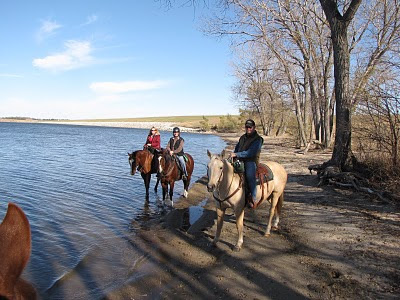 We rode a little over eight miles. And just for the fun of it, I tried out Ginger's fast gear. We topped out at 25.5 mph - not as fast as John would ride her, but faster than Windy and I go. I was pretty sure she might just keep on running home. I was surprised when I pulled her in to find Jules had opened Trey up, too, and they were right there next to me. For those of you who have followed my website, the palomino that Steve is riding in the picture above is GinnyBelle, our Baby's baby. Steve and Julie have had Ginny for a couple years now. She has really become a trail horse deluxe! (For that story, see Horsetrailriders.com & scroll to 4/6/05 A Baby for Baby). 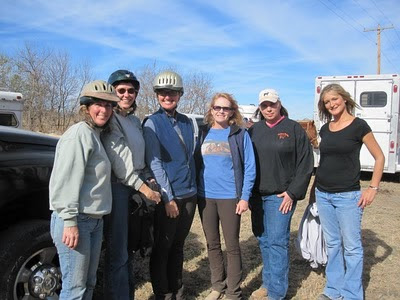 My riding buddies & me: Julie, Sandy, me, Joni, Jess & Tanya
On Sunday, the same group, met at Wilderness Park to ride with the Nebraska Horse Trails Committee. I brought Windy for this ride. There were eleven of us on the trail. Another fun day. Highs reached about 75 degrees. 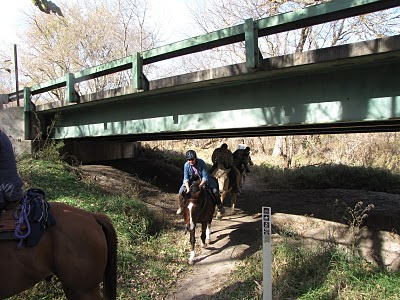 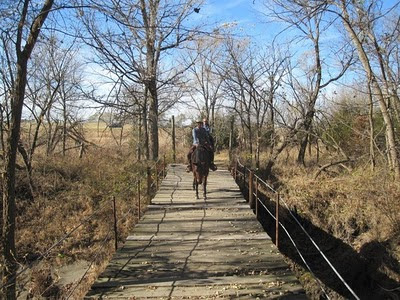 Of course, each day was followed by eating out – and we didn't pick any healthy heart restaurants. There is nothing like fried food after a day on the trail!

Yesterday, I had to work. When I got in my Durango at the end of the day, it read 74 degrees. I hurried home and changed clothes. Ginger was the first horse I could grab and I saddled her in record time and we headed down the road. I was thrilled that she settled into a slow lope on a loose rein. You all know slow is not Ginger's style. I rode out about a mile and a half but was losing daylight quickly. (Damn this time change!) I rode back onto the place just as our yard lights were flickering on. A short ride is better than no ride.

Although not quite as warm, it still looks fairly decent through the weekend. We are just stealing time from winter and I love it!