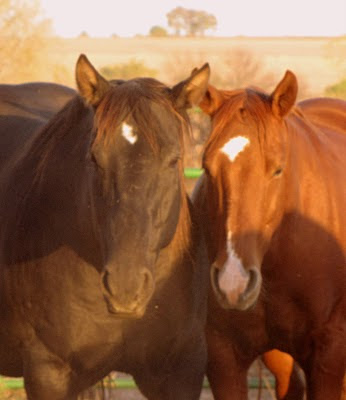 It’s hard to tell if Ginger or Blue is the herd boss. I always think its Ginger, but there are times I see Blue moving her around, too. They are very attached to each other and probably, in some ways, share the role. We brought Ginger home when she was three and bought Blue, a then four-year-old gelding, a few months later. They have been together for ten years. 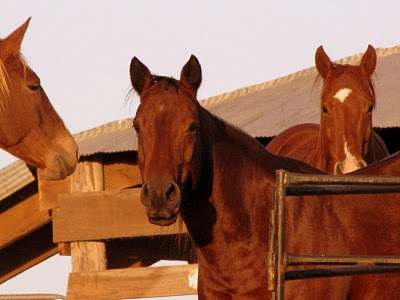 We bought Baby as a weanling from the same place we got Ginger. So really, Baby and Ginger have been together the longest. But due to the age difference at the time, Ginger has always been the leader over Baby, the boss mare. Baby took on the role as the “guard”. Blue and Ginger do not get aggressive with Windy or Butter because they have Baby around to do their dirty work. 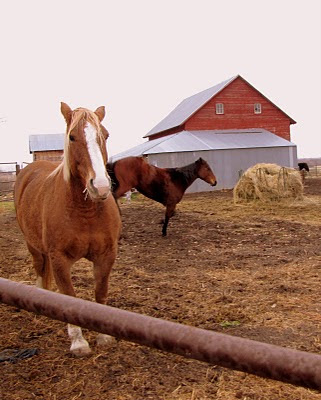 Had Windy not been separated from the herd for those two years, I often wonder if she would have ended up higher than Baby in the pecking order. After all, she is Ginger’s baby. She’s a scrapper, though, and I think she has worked her way up to at least being an equal to Baby. Oh, she’ll back down if Baby comes at her with ears pinned. Heck, I would, too. That big girl is scary looking when she’s mean! But as long as there is room to get out of her way, Windy is not shy about bellying up to the bale with Baby and many times, will eat next to Blue and Ginger at the bunk in the barn. 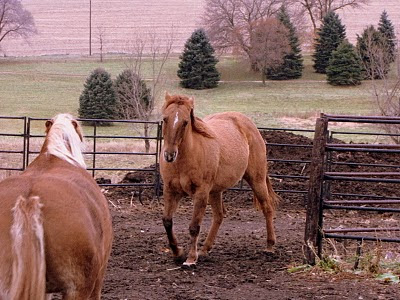 Then there is Butter, the poor girl. She joined the herd a couple months before we brought Windy home again. But her ranking remains at the bottom. The first weekend that Windy returned, we turned her out with Butter and they never had any “getting to know you” wars. I think Butter was glad to have an ally. I see them fight sometimes like siblings. I recall one time when we were riding, Butter kicked out at Windy. Windy spun and double barreled Butter before I even realized what was going on. Windy is an earpinner, but for the most part, she isn't a kicker. But something about Butter can bring out the worst in her. But when we travel, its Blue and Ginger in one pen and Butter and Windy in the other; that’s what works. Baby doesn’t usually make the travel team. 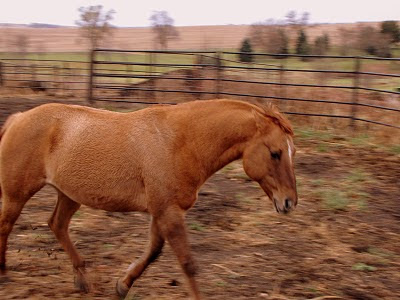 Last night it was raining and cold; snow was in the forecast. Ginger, Blue and Baby were in the barn and Windy was standing in the lean-to going into the barn. Poor Butter was left out in the rain. I dropped some hay down in the front of the barn which is separated from the area where the horses were standing and moved Butter and Windy to that side of the barn. I filled a tank in the run, hoping it wouldn’t get too cold that it would freeze. It didn’t. This morning, I found both of the young mares standing in the doorway to the barn with the east sun warming their backs. I think they all had a good night. 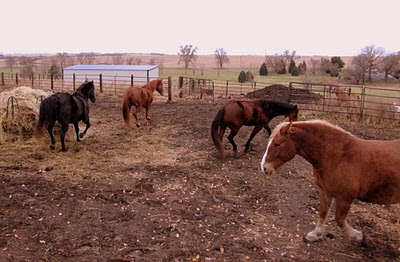 Five horses are a manageable number when making arrangements to keep everyone dry. It worked okay when we had six, but when the numbers were higher, it was more of a challenge. Someone always was left out in the cold. I appreciate how easy horsekeeping is with the smaller numbers and enjoy my time out in the barn keeping harmony among the herd.
- November 13, 2010