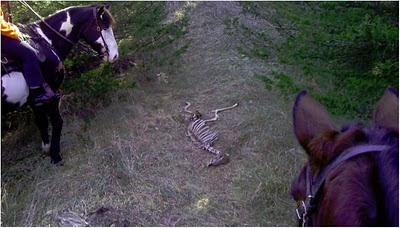 Lions and tigers and…. dinosaurs? Oh, my! We came across this bag of bones on the trail yesterday and I swore it was a raptor from Jurassic Park! But no, just a dead deer lying in the middle of the trail. The horses weren't real keen about going around it. A lot of snorting and some big ears before they finally concluded it was harmless. 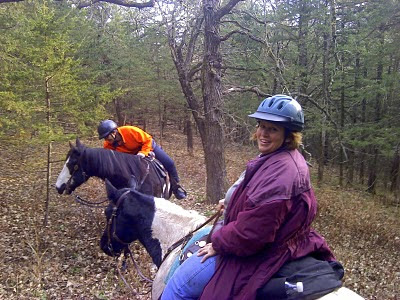 We stole another day from winter yesterday. Highs were in the low fifties and surprisingly, no wind. I met Robyn and Sam at Camp Moses. My heart sank a bit when I went to register at the visitor's center and the sign said "Horse Trails Closed Today" implying wet trails. We hadn't had any rain or snow lately, so I was surprised. I called the park manager and said he was worried that there could be ice under the leaves. Since I know the trails so well, he agreed to let us go ahead and ride at our own risk and just asked that we stay away from the steep trails. I was so thankful he agreed to let us ride there. Not that we wouldn't have found somewhere else we could go to ride, but we wanted to ride Camp Moses. 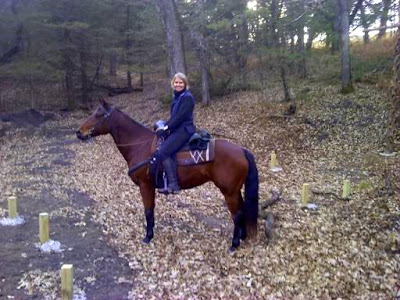 Before we rode out, we had plugged in a crock pot at the campsite. After about a 3-1/2 hour ride, we came back to the trail head for a mini-feast. Who would have thought we would be sitting at a picnic table, outside in Nebraska on November 27th? It just doesn't get any better than this. The weather today calls for more temps in the fifties, but the wind has returned, so it won't be that pleasant.