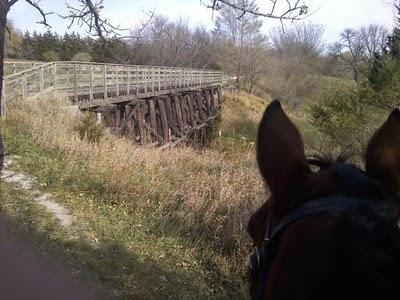 We are experiencing another week of mild temperatures, so I took Monday off to ride. Well, originally I took it off because the kids were out of school, but turns out they had plans that didn't include their mom, so I had a free afternoon. Hmmm. Clean house or ride? Clean house or ride? Such a tough decision! I loaded up Windy shortly after lunch and headed over to Valparaiso to ride the Oak Creek Trail. 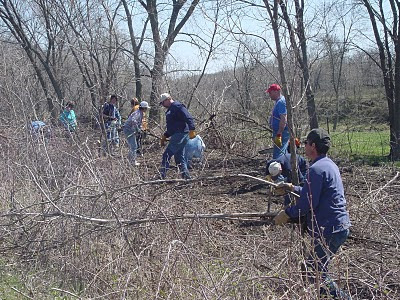 A former railroad bed, the Oak Creek Trail was converted by our NRD to a 12-mile hiking and biking trail. In early 2000, the Nebraska Horse Trails Committee was given the blessing by the NRD to clear the land running parallel to the limestone trail for an equestrian trail. John and I were new to horses and to trail riding and this was a good opportunity for us to meet other horse riders, so we joined the mission. Ten years later, I still consider those who lead the cause, Rich and Kathy, Mike, Mary and Dwight, Pattianne and Jamie and Vickie, very good friends and we have remained active with the NHTC. 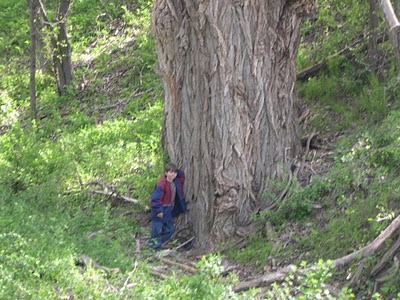 There are so many places along that trail that hold special memories. There is a sign along the first mile that never fails to spook Blue. Hang on tight if you are loping him! And there is the huge cottonwood tree. Although the picture above is blurry, I am glad I saved it. I am not sure if I am in awe more over the enormity of that tree or at how small Case was at that time! 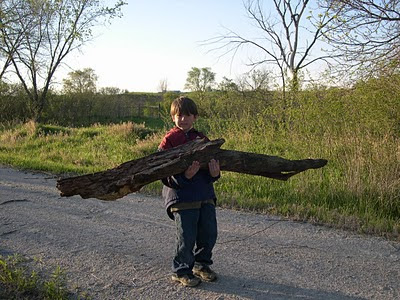 It was not only a group activity but a family project. The kids got in there and helped move logs and branches. They would tire after awhile and go exploring. There is one trail I call "Dead Deer Trail" because that is what they found. They also found rail road spikes, deer sheds and other treasures along the way. 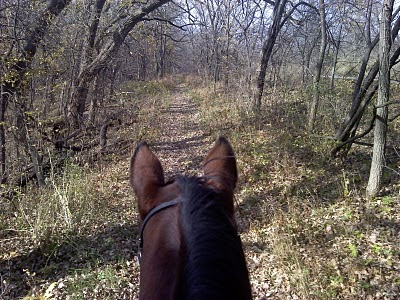 About midway to Loma, we call it the Long Mile; that portion of the trail runs diagonally between the two county roads. And it is the prettiest section of the trail and my favorite. In the spring and summer, the leaves form a canopy above us and in the fall, you experience their brilliant colors before they fall along the trail. 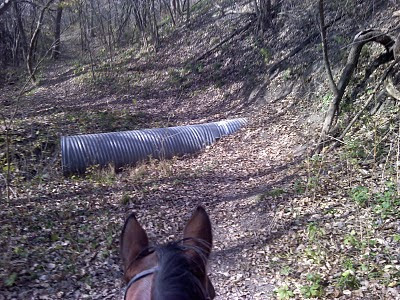 My favorite trail leads up to the "dreaded culvert." When clearing the trail, we didn't think anything of continuing the trail up and over the right hand side of the culvert shown above. However, it is the area of most concern on the Friday Before Mother's Day Ride, so I always flag it so the riders know it is coming and can detour around it if they feel it is necessary. 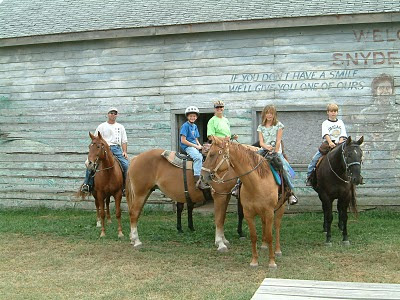 After about six miles, the trail goes through a dirt road town called Loma. To those who are movie buffs, the Patrick Swayze movie To Wong Foo Thanks for Everything, Julie Newmar was filmed in Loma in the mid 1990's. In the movie, the town was called Snyderville and you can still see evidence on one of the old buildings in Loma. The trail continues on another 4 or so miles into the town of Brainard. That stretch is pretty open, winding through cornfields and soybean fields. 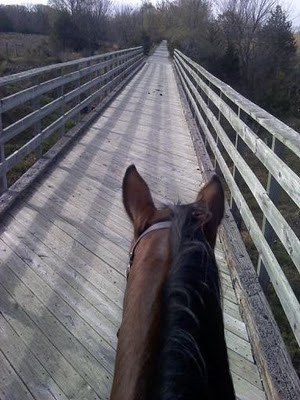 Clearing the trail was a labor of love; the trees, the bridges, the views.... the memories. I never tire of riding it. I know it as well as I know the pastures and gravel roads around our place. I am always overwelmed with pride as I meander along the paths that we made and feel a sense of ownership toward it. Riding the trail alone this day, just me and my horse, it was a coming-home sort of feeling. It will always be "my trail."