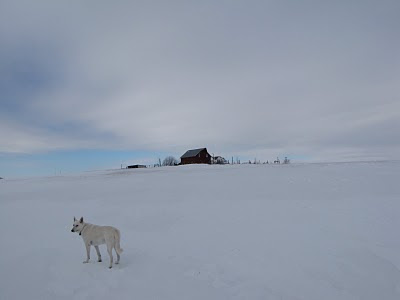 When we lost our outdoor dog, Jo-Jo, to bone cancer a few years ago, my criteria for my next dog would be one that had the stamina to come along with me when I ride. We talked about it a lot on Horsetales. Everyone had their favorites, but I was on the fence. I knew I didn't want a heeler or any of those that are typically cow dogs. No reason except those dogs really weren't "my type", not that I really had a type.

I grew up with a terrier, Mitch, as our house dog. Had an assortment of other dogs in my life; some big, some small. My favorite has always been Springer Spaniels, but my Madelyn has dealt me enough ear infections to last a lifetime, so I've soured on the maintenance. Jo-Jo was a lab/St. Bernard cross and the perfect farm dog. When she was younger, she would follow us when we went riding but as she aged, she would turn for home after a short distance. I felt a giant breed was not the best choice as a riding buddy. When someone mentioned a German Shepherd, a breed I hadn't thought of, I put it on the list as "a maybe." 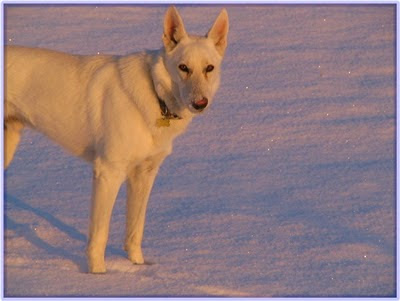 Perusing Craig's List a few of years ago, I noticed an ad for a White Shepherd. The dog was about 6 months old. The person who listed him said the wife was pregnant and puppy smells were making her gag. The dog had to go. We went over to see him and I was in awe of his regal looks. He was healthy, up to date on everything and appeared athletic. He fit the bill. We loaded him up and brought him home. I renamed him "Ritz"; by definition, ostentatious display of elegance. And he is. 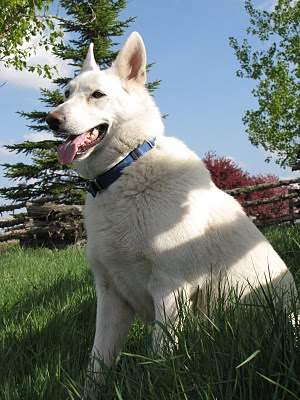 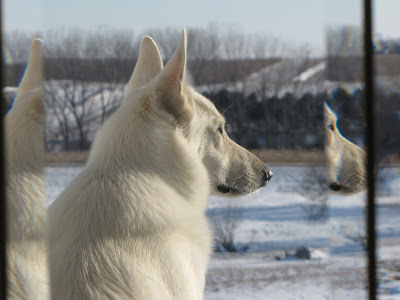 When I think of German Shepherds, I think of police dogs; guard dogs, protectors and loyal. What I didn't think about was the "shepherd" part of the name. Definitions of shepherd on the Web are:

Shepherd. "Herder". The herding instinct. Ritz has it bad. And since we don't have sheep, the horses are it. Within the first few months of his young life, he had lost a couple teeth after being kicked in the mouth. Did that stop him? No. He just moves more quickly out of the way. It's funny, he knows that 95% of the time that I go to fetch a horse, it's Windy. So he runs out ahead of me and starts to circle her. She has his number and he doesn't scare her one bit. Actually, I think it has become a game between them. He chases her, she chases him. 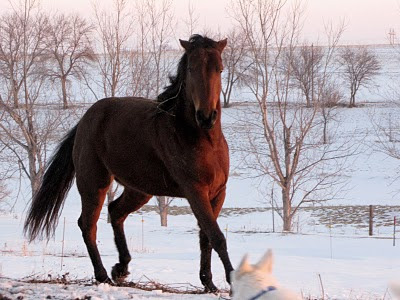 Most of the time he is the most obedient, smart dog I have ever owned. But when he is off to herd, he becomes a deaf dog. One of the first times I took him riding with me, some mama cows and their calves were along the fence line near a neighbor's farm. When the cows saw us, they started to quickly move away. And Ritz was in hot pursuit. I thought we were done for it. I'd already decided if the farmer came out, I wasn't going to claim him. I'd just say I never saw the dog before in my life! But as quickly as he started chasing those cows, that farmer's dog started chasing him! And that was the last time he ever chased a cow along our route. Smart dog. 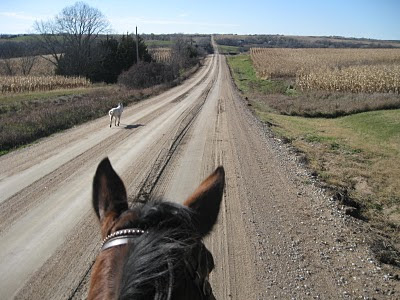 As I am saddling to ride, Ritz gets more excited by the moment. God forbid, I have a tack issue and can't get saddled in the 3.5 minutes or he about goes ballistic. But once we hit the road, Ritz leads the way. If he gets too far out, he'll come back and loop behind us, moving us along. And if I stop to let Windy graze? Oh.My.God, Ritz can't deal with that. He starts to circle us. Eventually, I'll tell him to sit. And he will, but it takes a lot out of him that we are not mobile. Next time we go out, I am going to put the GPS on his collar and see how many more miles he does than I do! 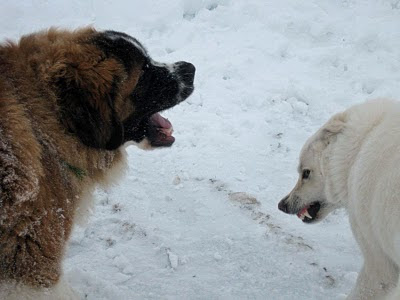 The downside to Ritz is he is very cautious around strangers; men in particular. But his reaction to men is based on how they act toward Ritz. My farrier can drive up and get out of the truck with his hands full of tools and approach me and Ritz doesn't have an issue because my farrier ignores him. The Schwan's man will not get out of his truck if we aren't home because he is afraid of Ritz and shows it. And Ritz knows it.

The other day while riding down the road, some farmers were out fixing fence. Ritz's hair went up on his back as he watched them. I hollered ahead to the men. "Ignore my dog. Don't look at him or reach for him as he can be protective of me." I didn't want to scare them, but I also didn't want to worry. I put Windy in a trot and we quickly passed them; Ritz barely giving them a second look. Unfortunately, I won't take him camping with us because I don't think he would be comfortable with so many strangers. But I would love to take him camping if we were going somewhere private.

Ritz turned out to be the best riding buddy. He can go the distance and then some.