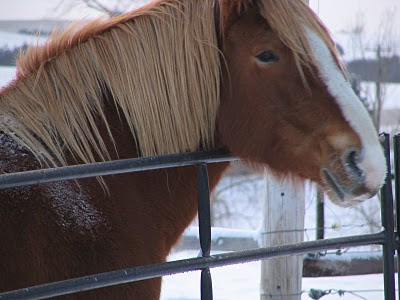 We came home last night, after the last basketball game of the season, and I noticed tracks on the icy/snowy driveway. I commented to Case that I hoped those were dog tracks, but stopped and opened the door to the Durango and looked closer. Granted, the ground is hard ice, but I was pretty sure I was looking at horse tracks. Damn!

I ran into the house and changed shoes and headed to the barn. The gate to the corral was closed, which was a good sign, but there wasn't a horse to meet me, which was unusual. I walked toward the barn, praying they were huddled inside, but it was quiet. I turned on the light to find the barn empty.

Case and I jumped back in the Durango. After the last escape, I keep a couple halters and leads in the back. We followed the tracks out of the drive and across the gravel road. They appeared to have gone into the cornfield or the alfalfa field – it was hard to see in the dark and with the corn stubble and alfalfa, it was anyone's guess. John started driving the perimeter of the corn field and me, the alfalfa field. John called and had picked up their tracks in the cornfield, so I headed that direction, too. In the meantime, I called the sheriff to see if anyone reported seeing any horses. "No," he said. And told me he would make note of it in case anyone called.

It was so dark. John went north; I went west until I came to a fence line. As I followed it around, I saw what appeared to be a figure in the middle of the field. Yes, there they were. I didn't want to spook them and have them run toward the road & ultimately toward the highway, so I tried to stay in front of them. I stopped a distance away and started to talk to them through the window, calling them by name. Initially, they trotted away and we followed, keeping a safe distance. I then got out and walked toward them, continuing to talk to them. I reached Blue first and attempted to slip on the halter.

When I put halter and leads in the trunk of the Durango, I grabbed older ones that I didn't use much. Crap. I must not have checked for size because no way, no how was this one going on Blue's big head. Ginger had worked her way up and she can be skittish about being caught, but I had to get one of the herd bosses, Blue or Ginger, to get the rest to follow. Luckily, Ginger waited while I put my arm over her neck and slipped the halter on.

We started to make our way back across the field; I was leading Ginger, the herd following and Case behind the herd in the Durango, the headlights helping me to see a little better. The snow and ice on the ground helped, too, but the field was rough. It wasn't easy going. Then, something spooked the herd. They started to rush past me. It took a moment for me to realize what I was hearing with the sound of the ice and the cornstalks and I didn't have time to react. Ginger pulled from my grasp. When I tried to pull her in, I slipped on the ice and went down hard on my back. I heard horse hooves near me and then they were gone.

I slowly got up and looked for my shoe – somehow it had slipped off in the struggle. Man, did I hurt. I heard every vertebra in my neck pop upwards and felt the familiar tinge of pain in the tailbone, an old injury that had finally stopped hurting last spring. I slowly got up, caught my breath and Case pulled up next to me in the Durango and I got in. The horses had run into the night toward the road. I called John and gave him the new destination and prayed they went to the next field and not toward the highway. I was relieved to find them in the cornfield across the road.

I told John that Ginger still had a halter and lead on; I grabbed the other one and started walking toward them. I had Butter's attention and she met me halfway. I easily slipped the halter on her and John caught up with Ginger. The other horses fell in behind and we started the slow procession back to the corral. 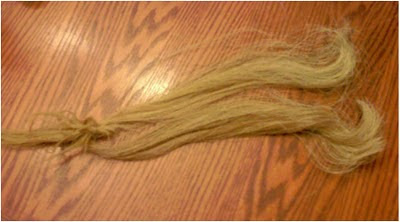 I never worry too much when they are in the corral. It is pretty secure with the high panels interlocked and then each wrapped with wire. But, evidently not secure enough for a panicked draft horse. We surmise she was scratching her hind end on the panels and her tail became tangled in the wire. She must have freaked and in her struggle to free herself, brought down the panel. We found a big strand of her tail hair hanging on the panel.

As much as I damn the snow and ice, in this case, it was in my favor. Had I not seen the tracks, I wouldn't have realized the horses were out until daylight today. They probably would have stayed in that cornfield but you never know. I'm glad I didn't have to find out.
- December 17, 2010