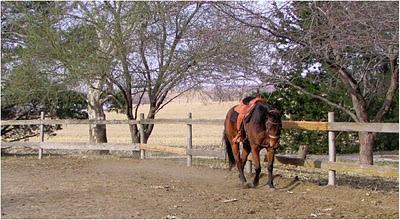 Windy had to take the horsy equivalent of a time out today: visit The Round Pen. I keep a diary of sorts of my rides and about a year ago I had posted this: "Windy was wired, so didn't take her out on the road." Today was much of the same, and I can't say I didn't see it coming. She's been a bit disrespectful lately and I've been a push-over. Today it started with her choosing not to stand still while I saddled, not to stand still when I mounted, and scooting under me like the devil had her tail more than once before we even got to the end of the driveway. I had had enough already! I dismounted and we took the walk of shame to the round pen and I promptly put her to work. 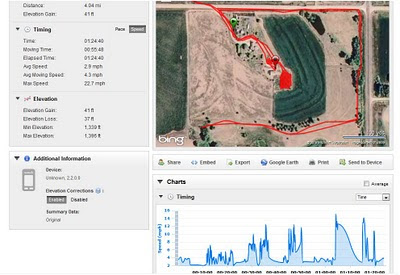 After about 20 minutes, she stood like a soldier while I mounted once again and rode over to the arena for some circles and other riding exercises. Then we ended the day with the ride I had hoped for, albeit a bit shorter than planned. I found today's GPS tracks quite interesting as I had the GPS hooked to the saddle horn. The red smudges to the left of the red "balloon" is the round pen & the big red smudge to the southeast of the red balloon is the arena.

Maybe the next time I am struggling with deviant kids, I should take them to the round pen with a dressage whip.

Kathleen, of Kathleen's Wild Ride, is still in Hastings. She has a ride to North Platte tomorrow, but no place to lay over or a ride out of North Platte. If you can help her, visit her Facebook page.