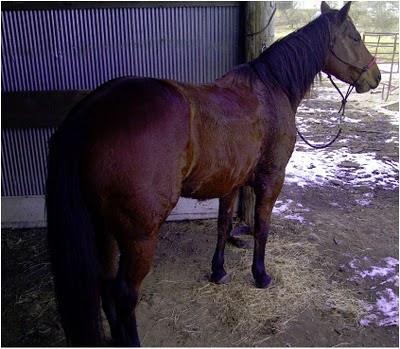 It was the first ride of the new year and we had a little wreck. Windy's okay, I'm okay... albeit a bit bruised. Hoping we got that out of our system now.

What happened? Wish it were a better story. We were riding down the gravel road on a new route from home. I saw a car in the distance and as usual, dropped her down into the ditch next to the road. There was an electric fence running on the other side of the ditch, but no biggy - we ride next to these all the time. This one was a bit different - it was the white braided rope rather than wire, but surely Windy knew this? I don't know what she was thinking, but she turned right into it! It hit her, she bolted & we went through it.

I pulled her to a stop on the other side of the fence. Dismounted & inspected the damage. I couldn't see a gate to get us out, but the fence was pretty stretched so I figured I could step on it and she could step over it. As I got closer, I found there was another strand of wire fence below the braided rope. I gathered up both the strands, stepped on it and asked Windy to step over it. She did. God, I love that she trusts me so. But, as she took the last step, she clipped the fence with her hoof.

She spooked and ran in front of me, the wire on her ankle now wrapping around my ankle. I went down behind her; still holding the reins. She dragged me a ways until I got the mind to let go of her. And when I did, it freed me and her from the wire.

I slowly got up. My shins had taken quite a beating from her back hooves. My horse and my dog were running ahead but not on any mission so I knew they would eventually stop. And they did. After I settled her, I climbed aboard and we went home.

I have quite a little color on my shins which, no doubt, will become even more colorful tomorrow morning. But hoping (knock wood) that the first ride was the worst ride of 2011 and it is only uphill from here!

Kept my New Year's resolution & ended the ride with a smile (over gritted teeth.)

(I posted the picture of Windy after the ride. It is so unusual for her to be this sweated up after a short 6 mile ride. Just shows how worked up she was over the whole ordeal, too.)