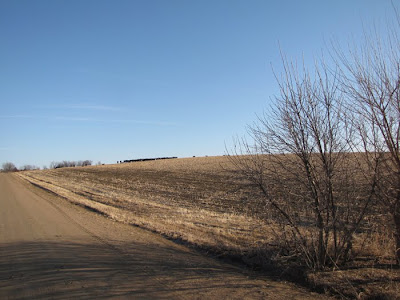 Our neighbor called last night and asked if we wanted to help move one hundred plus head of cattle from the cornstalks to their farm. They will start calving soon and it is easier for them to manage when the cows are dry-lotted. (I have no idea if bringing cows up into a large corral is called dry-lotting like it is called with horses, but since most of you are horse people, we'll go with it.) I was excited to give it a try. I have moved a big herd with Blue many years ago but other than moving our little herd of cows, Windy doesn't have a lot of experience doing cow work. Being Pitzer bred, she has the blood for it, but does she have the guts? And do I have the guts to ride it out should she decide this isn't such a good idea? I was nervous, much in the way you anticipate a roller coaster ride. 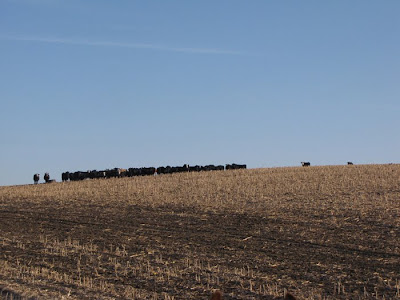 We were to be at the field where the cows were located at 9:00 this morning; just a mile and a half down the road. With John on Ginger, we left the yard about 8:15. I wanted to give the horses plenty of time to see such a big herd before we actually started moving them. As we approached the field, Windy did get pretty big eyed over the cows, especially when they started moving as a herd toward us! We stopped and moved off to the side of the road to wait for the others. We certainly didn't want any crazy shenanigans our horses might exhibit to spook the cows and have a stampede before the drive even started. 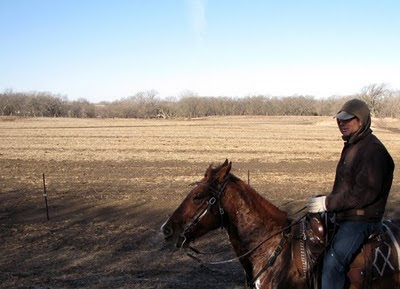 It wasn't long before the rest of the crew showed up. There was one other horse & rider, a couple of trucks to block the intersection, a gator, a tractor with a feed wagon as "bait" for the cows and about a half dozen ATVs. We were quickly given instructions: the ATV's would go flush out the cows and bring them toward us. We were to head out to the west cornfield, the only side of the road without fencing, and keep the cows from coming into the cornfield. He assured us that a few always stray, so not to worry about it.

Flashback to WKRP in Cincinnati – remember that show? Remember when Les Nessman was on the ball team and he stood outfield and prayed that the ball wouldn't be thrown to him. Well, I felt kind of like Les. Oh, please God, don't have any of those cows stray into the field. I had visions of Windy rearing and falling over on me and the ATVs whipping around with cows stampeding. What had I gotten myself into? I looked at John and Ginger thinking perhaps I should switch horses with him Right.Now. But Ginger didn't look any safer than Windy at the moment.

There was a tree line blocking our view of the approaching cattle. But Windy could make out the movements and her ears were up and she was bracing. I'm pretty sure she grew to 17 hands in that first moment. "Keep her feet moving," the little voice kept saying in my head and I would move her off my leg, circle her around and approach slowly. Those bossy cows were moving fast! If they were horses, they would be doing a road trot! And then "whizzzzzz"! Here come the ATVs around both sides of me. Windy held her own with those, but when the other lone horse came galloping by, she had a moment of confusion. She's never been one to be rushed by the energy of other horses, but no doubt she was a little overwhelmed. I snugged up the reins and kept talking to her, "easy, easy, Poo," and we started trotting toward the cows. I thought if she kept looking at them, we would be alright. And we were. 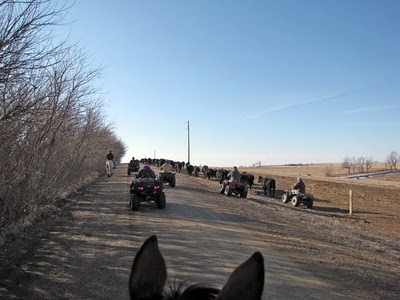 We ran along the field parallel to the herd of cows. Occasionally she would move into a lope, but most of the time we were long trotting. None of the cows strayed nor did my horse bolt. She was excited, but was not out of control. I'm not sure how John and Ginger faired; most of the time they were behind me or out of my view. From the comments made by the ATV riders later, I think I had the calmer horse. J I did get a bit nervous when we trotted out of the field, through a road ditch and needed to drop back down into the next field. Windy and I had just fallen on ice in one of the road ditches yesterday, and I was worried about the footing. I pulled her in a bit as we dropped down into that next field, relieved to find it dry. 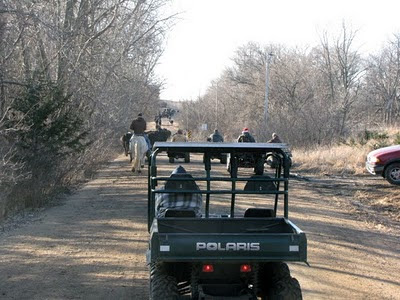 After another quarter mile, the road narrowed to minimum maintenance and there was fencing on both sides. John and I dropped to the back of the drive. Windy wasn't ready to quit; she continued at a fast walk, passing the gator and coming up between a couple of ATVs. I kept her pretty collected at this time as I found anytime I loosened the reins, she would try to break into a trot. I really think she was having a good time. This was also the only time I managed to get a few pictures taken. 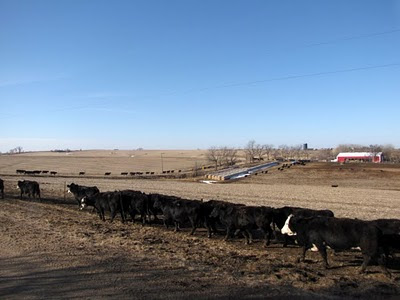 After those cows were put in the dry lot, we continued to the next field about ¾ mile down the road. I remember galloping down the road next to an ATV, feeling a bit more horse than I am used to riding, but fun in a way that a carnival ride makes you feel. There were only 50 cows in this next field. Once again, we rode along the cornfield next to the herd. When the road narrowed, Windy worked herself up nearer and nearer to the cows until we were almost flanking the last slow cow of the herd. Again, it surprised me was how fast the cows moved. Up until that point, we had long trotted or loped most of the way. Once I set my fear aside and let my horse have her head a bit, it was really invigorating and quite a rush. 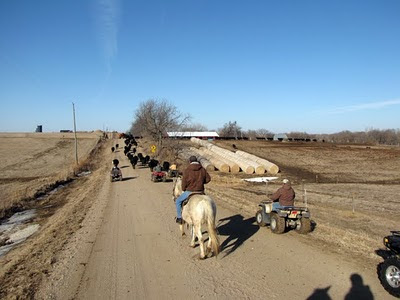 After the ride, we put our horses in a small stall in the farmer's barn. The matriarch of the farm provided coffee, burgers and donuts. Everyone was pleased with how the drive went and we never lost a cow. I found out the other rider's horse was a 23-year-old rope horse; had been there and done that around cattle. And even as seasoned as that horse was, he had a little spring in his step. It must be in his blood, too. As we were leaving, our neighbor asked if he could pay us for our time. We said he could, by inviting us back the next time! I had a blast!