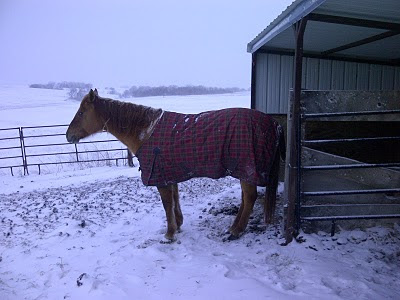 The "worst storm this winter" was predicted to hit yesterday afternoon and carry its wrath through Wednesday. When I left for work that morning, it had already started. My windshield kept icing over and the first time I went to slow down, I felt ice underneath me and this at 6:30 AM. I have a thirty mile drive to work and knew it would continue to get worse as the day progressed, so I turned around and went home, choosing instead to work from my "home office." I can do pretty much everything I would do in the office from home, but couldn't do it every day. I enjoy the interaction with others. It is nice to have that option, though, on bad road days.

Before they got really wet yesterday, I enlisted John's help in blanketing the herd. I know I have mentioned it before; I blanket for me, more than I do the horses. They made it ten years without a winter blanket. But after last year's winter from hell, I got them blankets; even Baby inherited one this year, so why not used them. They have new round bales in the corral, but I dropped some alfalfa in the barn feeders just because. And they were ready for the storm. 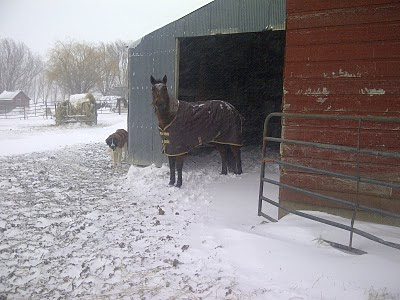 We got a few inches of snow, which combined with the 20 – 40 mph winds, is causing drifting and white out conditions. I stayed home again today. When I went out to check on the horses this morning, I found four of them in the barn out of the wind. Butter was not with them. I was glad to find her in the portable shed, but sad that she was there by herself. Being the lowest in pecking order, she is seldom allowed in the barn, but usually hangs out nearby. She'd obviously had enough of that and found her own shelter. I dropped some more hay in the feeders of the barn and took a bale over to her, as well. I snapped the picture of her (shown at top of blog) with my Blackberry - she looked so brave to be there by herself. Poor Butter-butt.

The winds are expected to continue to blow with wind chills dipping down to almost -30* tonight. Although there are fresh round bales in the corral, I'll bundle up once more at dusk to feed the horses inside, keeping them out of the bitter wind. Although I enjoy barn time, horsekeeping in this weather is not fun. But every day is a day closer to spring – one day at a time.

On another subject, I like to change my header picture every month. I took this picture of the herd last week or so - liked that they were all in the same picture looking up this way - but I don't think I like the picture very well on the blog. It is not a "good" picture and photoshopping it didn't really help. So this month, there were two header pictures, though the first short-lived.
- February 01, 2011