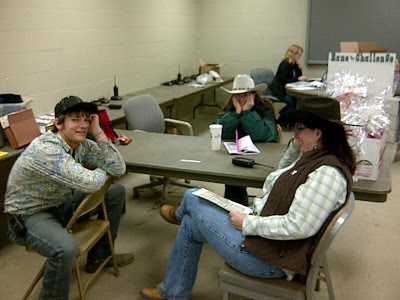 Where do I begin (name that song)?

This was my sixth year being on the Expo planning committee and I have to say that from an operational view, it couldn't have been better. Working with the same people for six years really helps develop a fine oiled machine. Not saying it wasn't without a snag here or there, but most of the time, resolution is quick and easy. (The above picture is of our expo chair, Cindy Vossler and her son, Colton, and our treasurer, Sandy Powell after a long first day.) 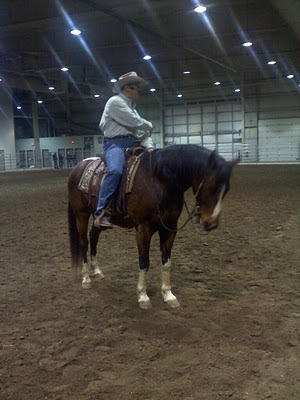 Our headliners this year were Van Hargis, Jimmie Munroe, Monty Bruce and Craig Cameron. Van was a return guest, having been one of the first clinicians I booked when I worked that area in 2006. He is as kind and gracious as he was then and from the audiences' feedback, he was once again received very well. His practical applications of horsemanship could translate into cow work, trail riding or showing. I believe he was the crowd favorite.

For those who don't know Jimmie Munroe, she is a champion barrel racer and instrumental in starting the Cowgirl Hall of Fame. I want to be her when I grow up. Since she isn't that much older than me, I had better start working on it! A kind, kind, kind lady, soft spoken but with a strong presence; all beautiful traits for any horseperson. I met Monty briefly, but unfortunately didn't have the opportunity to sit through any of his performances.

Butter was supposed to be in a Craig Cameron demo on "problem horse". She has a few, but what I mentioned to Craig is her lack of softness primarily due to being ridden by a kid all her life. He told me he "can't fix that in an hour" so Butter got pulled. Instead Craig worked on a buddy-sour Morgan, which I guess is fixable in an hour.

When we started planning Expo and had signed Craig Cameron, we really wanted to have an Extreme Cowboy Race (ECR), but were having a hard time getting the sign-off from Craig's people. So we went ahead and put it together as best we knew how & were ready to roll it out under another name when we got word that Craig was on board. In a little over two weeks, I had twenty some riders signed up and the Extreme Cowboy Race worked into the schedule for Saturday night. 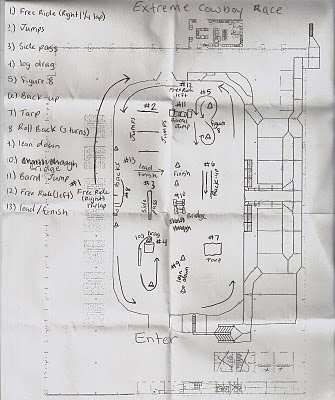 The course was posted for contestants early Saturday afternoon and they were allowed to walk it on foot prior to the event. The goal was to successfully follow the pattern, passing through the 13 obstacles. Contestants were judged on each obstacle, their overall horsemanship and time.

I had a really good time leading up to the event; talking with many of the contestants via email or phone as they contemplated signing up for the event. Plus there were a handful of Horsetalers who also entered the competition. Logistically, I was nervous, because I scheduled it in an arena that doesn't have as much seating as the one we usually use for our Saturday night feature, but due to the obstacles, I needed to be able to shut it down for early set-up. We used ushers to seat people to gain the most use of the 1,000+ seats and for the most part, it worked out fine. 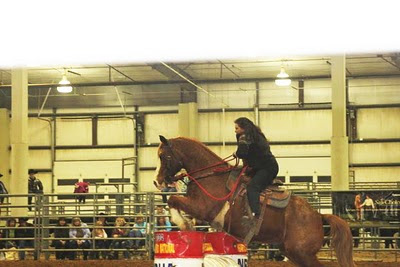 The event itself was exciting and entertaining. The riders are brave souls to want to get out there and try this with their horse and I admire their moxie. They rode hard and strong and should be proud of their try. 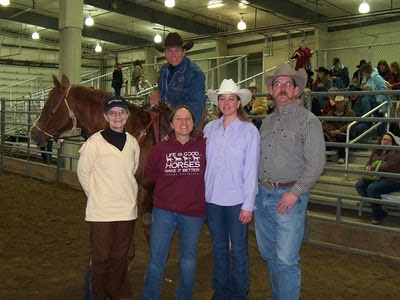 I was surprised and disappointed when Craig said the winners would not be announced until his first presentation the following day – that surely would not have been my preference -- but I was happy those top contenders showed up to receive their awards on Sunday morning. As planners we try to expect the unexpected, but sometimes we just have to roll with the flow. There was no way we could remedy this one on the fly. (Winners: Juanita Serafina & Karen Harris (tie for 4th), Shelly Henderson (3rd) and Bryan Schronk (1st). Not pictured, Dr. Barry Littell (2nd).) 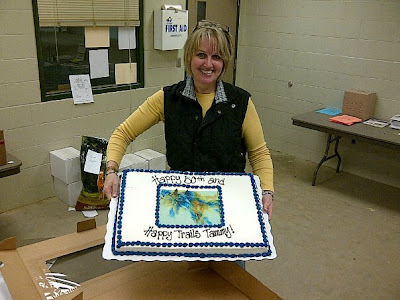 After the event on Saturday night, we planned to have a little get-together with committee members, Horsetalers and friends. Although I helped arrange a room for the party, they surprised me with a birthday party. How fun is that! I love having a birthday at Expo time. And thank you all for thinking of me.

I took this morning off for a bit of reflection and recovery. It was a great Expo.