I don't think I can scrutinize the buds on those trees anymore than I have. It looks like they are still there and perhaps just a little behind last year for blooming. Of course a little sunshine would definitely help the situation but like many of the rest of you, we seem to be lacking that element this spring. The April showers continue along with cold temperatures. I am almost mad that the weather is so damp and miserable. We are one week away from the annual May Day ride with my friends and I am in denial over the long term forecast. What does The Big Fat Lying Weatherman know anyway?


Although cloudy, windy and overcast most of the weekend, John and I did get some things done in the yard. The mere mention of "pruning" trees brought out the chainsaw and I'm hoping what is left of the windbreak survives such amputations. We also walked a mile of fenceline and fixed what was compromised this past winter by deer and snow drifts. We still have a month before we'll put the horses out in the pasture, but it will be ready when we do. 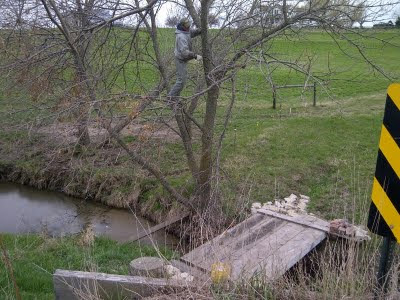 While fixing fence, we trimmed some of the trees on the trail around the perimeter of our property. Good thing John isn't scared of heights! After we got done with that project, we saddled our horses and took a quick ride around where we trimmed. It's all good to go… if the weather ever breaks.

Speaking of "break", Val over at Fantastyk Voyage and her good horse, Scout, encountered a pack of domestic dogs while out riding this past weekend and took a spill. As horse people, we hate to see our comrades injured and worst of all, unable to ride for a spell when riding season is upon us. She tells it best in her own words, so if you are so inclined, jump over to her blog and send her a note. Get well quick, Val! You have ponies to ride!