Out of My Element 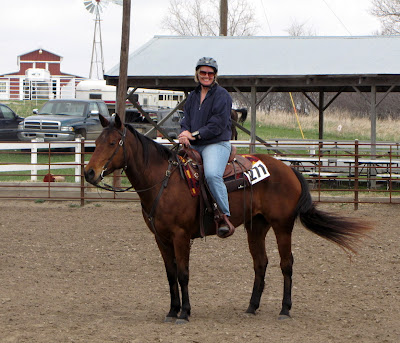 The weather threats had all but cleared up, so I got up early Sunday morning to head for the Capital City Horse & Pony Club for what would be my second real horse show in.my.life. I was surprised it was almost balmy out; definitely not what I was expecting. It's so hard to figure out what to wear in early spring, so I tossed in both a short sleeved shirt and a sleeveless one so I would be prepared. I planned to take the big trailer and should I need a jacket, knew there was an assortment in the closet.

The first two classes were English. I have no English clothing per se (maybe because I really don't ride English?), so I threw together what I thought would work: a pair of tan breeches and a black blazer – both from when I was several sizes heavier, one of the boys' white button down oxford shirt and my half chaps. I cleaned the dust off of McCain's black helmet which hasn't been worn for at least a couple years; I even had to super glue the visor back on the helmet. I felt kind of frumpy. Even though I have not kept all the weight off which I lost two years ago, these clothes were still baggy.

I changed in the trailer and commented to the gal parked next to me that I didn't have the best fitting English clothes. She said I looked fine but was probably more formal than anyone out there. And she was right. Although the horses were all fitted in English tack, only 2 of us were in riding pants and I was the only one in a jacket. Most of the other riders just wore jeans and a sweatshirt. I knew the show was casual, but didn't know it applied to the English classes. Now I know. 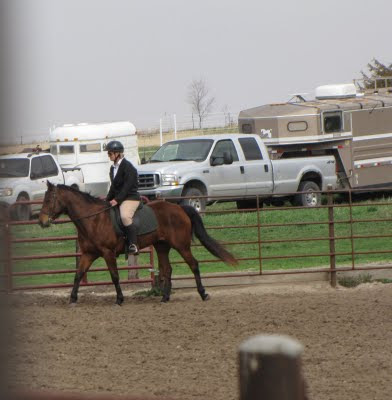 As I waited for my class to begin, I was very thankful to be in that jacket. Typical for Nebraska, the weather changed. The wind picked up and the temperatures dropped. I found myself shaking; partly from being chilled, but I imagine nerves were a big part of it, too. I rode Windy over by the bathrooms to get a bit of a windbreak and watched the younger age classes as I tried to rid myself of the jitters. I had planned to ride the earlier classes with a friend whose business trip was canceled in anticipation of a government induced furlough. When that didn't happen, her travel was reinstated so she was unable to join me. Another friend had planned to drive in for the later classes, but when the temperatures started to drop and a cloud banked formed, she hated to risk a long drive for fear of being rained out. Although I knew several people at the show, I was still on my own in the classes. It's much more fun (and comforting) with a "wingman." 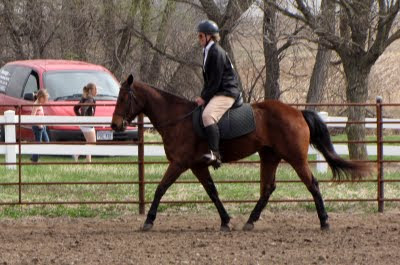 Another Horsetaler, a Cap City regular, entered the English classes and rode into the arena ahead of me. "Trot your horse", the announcer read. Windy's trot was much faster than the horse in front of me, so I passed her and was on my own in the lead. There were five other riders in the class (age 35 & over) besides me. I was nervous, but not scared. I thought our trot was pretty good, although looking at pictures, I see my posture was bad. When we were first asked to "Canter your horse," I missed the lead. I pulled her in and we tried again and got it. When we cantered up next to the gate, Windy dropped to a trot and tried to turn toward the gate. We had our struggles but all in all it was as good as I expected.

We placed 5th out of 6 in English Pleasure and 6th of 6 (okay, last) in English Equitation. But you know, I was okay with that. I have rarely ridden English, have no training in it what-so-ever and as I said, this is only the second horse show I have ever entered. Rationalizing. Yes. My goal was to stay on top of the horse, and I did. 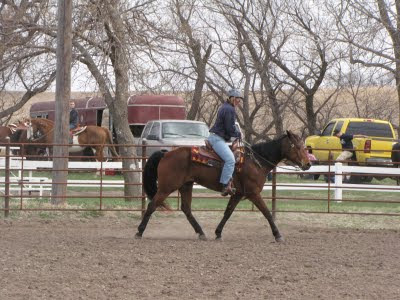 We didn't do as well in the Western Pleasure and Western Horsemanship classes. Placed about the same; six out of 6 in both. While Windy was in training, Brenda worked very hard at getting her to collect and carry herself in frame. But we have only worked when riding two handed. It didn't even cross my mind until I was watching the age group prior that these Western classes need to be ridden with one hand. I knew I would have a hard time getting her to collect and slowing her down riding one handed.

The class immediately following was a Walk/Trot open class. There were 18 riders of all ages. I felt like it was our best class; that we were doing really well. And then the announcer said "extend your trot". Hmmm. I think I was already there. Heck, I must have been lapping everyone! 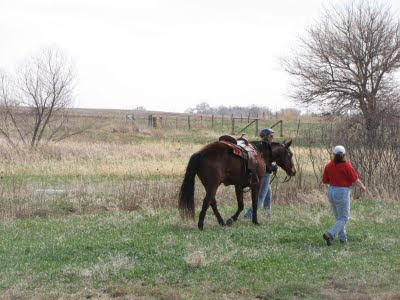 The Trail Class was just one notch below Craig Cameron's Extreme Cowboy Challenge! The judge, Terri Bergen-Smith, also a fellow Horsetaler, put a lot of effort into the pattern. Knowing it was difficult and the first time many were showing this year, she told everyone to take it slow; that she would judge on horsemanship more so than completion. And she walked with us through the course.

Windy totally refused both bridges – even one that looks incredibly like one we have at home. She refused the muddy water crossing. We were to canter a figure 8? Hmmm. Mine looked like something from the Greek alphabet and it certainly wasn't an "O". She did do a decent back and a pretty sidepass – kept sidepassing long after we were over the log. Good girl. We pivoted; not sure she nailed it but we ended up facing the right direction. 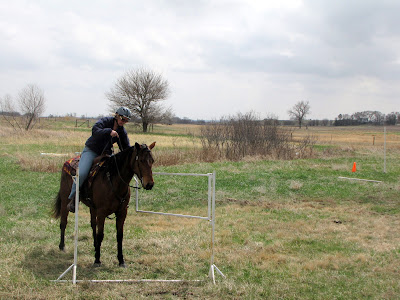 We made it both in and out of the gate, but realized while watching those entered before me that the way I have been practicing is incorrect. I have been bringing the gate toward me and then turning on the forehand around it. This judge asked that we push through the gate. She explained that when working livestock, you would want the gate to go in, not pull it out. I didn't change my game and did it as we have been practicing. Now I know and have an opportunity to learn another way. 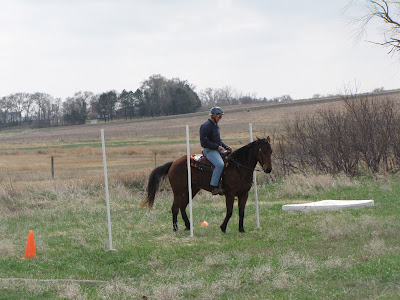 Here we were asked to back around the three poles. Some of our turns were more backward right angles, but we accomplished the maneuver. 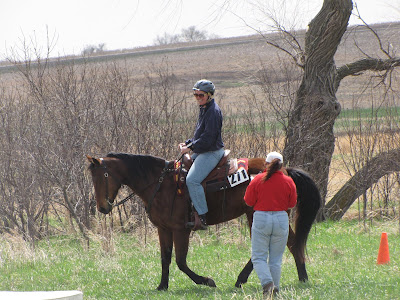 This picture looks prettier than it really was. We had just blown the figure 8 and now were asked to cross a bed mattress. Windy took one look at that and politely said "no thank you." I gave her a pass because I really didn't want to cross it either! 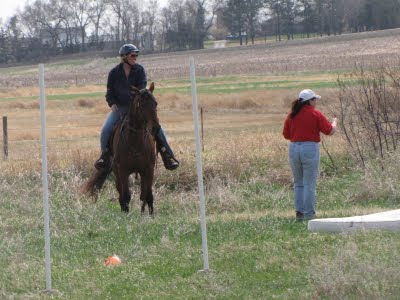 She went through a hanging tarp obstacle and went back through the gate at the conclusion of the trail course. A friend heard that we placed 4th in trail, but I didn't hear the official results as there were still riders going through after I finished. I was happy with our "try" and know where I made mistakes. And of course, just need to continue to practice at every opportunity.

My last class of the day was barrels. Now anyone who rides with me on the trails knows that I like to run. But for some reason, I feel more in control running down a road than in an arena. Windy doesn't know a barrel pattern so run, jerk her around and run again doesn't make much sense for her and isn't pretty. So I usually trot the barrels and then run back after the 3rd one. 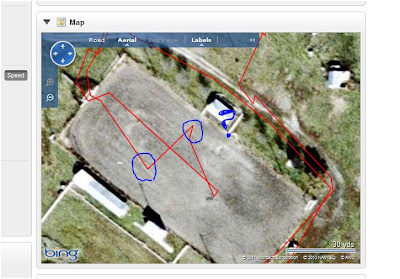 I really didn't know that you could blow a barrel pattern, but looking at my GPS tracks, I think I did! See where I circled the course in blue? Shouldn't there be a circle around the 1st and 2nd barrel like there is the 3rd one? I think I ran behind them first, rather than circling them. The judge was kind. I didn't get DQ'd. Placed six out of 6 again – the gal who placed 5th even dropped a barrel and still beat me!

I passed my camera around to different people I knew and asked that they take some pictures for me; so these shown on this blog were all pulled from my camera card. And believe me, these are the best pictures. There are 100 "outtakes" that show the not so pretty part of learning to show. Glancing through them, OMG - do I have a long way to go! Once again, I am reminded of Elaine on Seinfeld and her love of dancing.

It was a long day but I had a blast. The Capital City group is very welcoming to newcomers and make it beginner friendly. Check out their playday schedule and join the fun. In between trail rides, I wouldn't mind trying it again.