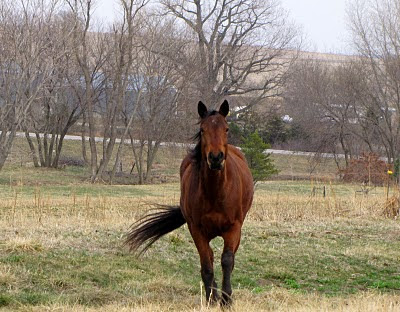 Signs of spring is evident, but I am still under par as far as ride time goes. Life just gets in the way sometime. I just mentioned on Horsetales that I need close to thirty hours in the saddle this next month to meet my goal. Doable in the warmer months, but between track meets, work travel and spring weather, it will most likely be a stretch. 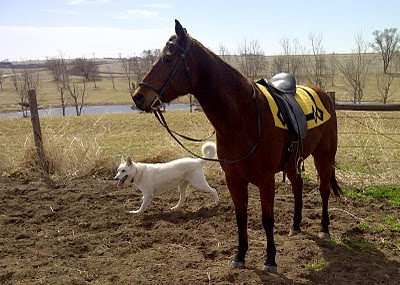 After church, while the guys made brunch (gasp!), I saddled up Windy in her English gear for a short ride. Looking at the picture now, I see the noseband and bit look too low and yes, I need to find a real English pad. But anyway.... Just for the heck of it, I am planning on going to a show next weekend and to make the most of my time there, thought I might enter an English pleasure class. This is quite a gutsy move on my part as I have had my butt in an English saddle only on a handful of occasions. "So why now?" you might ask? Capital City Horse and Pony Club is now offering classes for age 35 and over. I have no delusions that there won't be better riders than me, but just hoping there is fewer in the class which would make the overall ride less intimidating. In addition, I think the canter in English pleasure is a little faster than the lope in western pleasure which might be easier on both of us. I can then scratch it off my bucket list, but it isn't really on there. Just a whim and I may still talk myself out of it before it actually happens.

What other classes might I try? Maybe western pleasure. The lope makes me nervous because she is quicker. I can just see me running someone over. We have been working on hitting the correct lead. Not saying it happens every time, but I am starting to get the feel of it. So maybe…. There is also a walk/trot class which I entered last year. Because it is an "open" class, it was huge. It is still an open class, but I might try it again. With so many in the class, no one will really be watching if I screw it up too bad. I'll try the trail course and a few of the speed events. Of course I reserve the right to change my mind at any time.

I spent yesterday afternoon grooming. No halters required; the horses were pushing each other out of the way for a little time with the brush. I love it when they turn their head toward me as if wanting to groom me, too. I always get a little nervous when Butter does that; it would be just like her to nip me a bit. We have a long way to go for them to shed out completely, but it's a good start. The knots in Windy's mane, shown in the header picture, are no more. 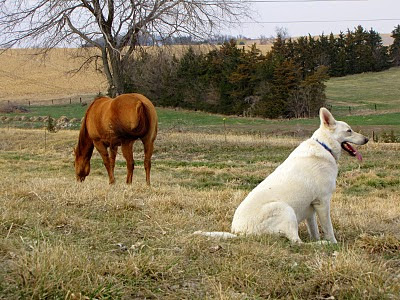 The big pastures are officially closed now until early to mid-May. We hope to get it fertilized in the next couple weeks and then give the grass a chance to grow. Now that we no longer have cows, pasture management should be much easier and there should be less overgrazing. I did let them graze in the north yard for awhile yesterday. Ritz was innocently watching but a little later, we found the horses on the other side of the fence. And the dog was happily on their heels. He usually only bothers them when I am around; he may have earned himself a time out when the horses are in this area.

Temps dropped from almost 80 to a brisk 53, with winds gusting over 30 mph. Welcome to Nebraska in the springtime.