The 11th Ride is a Charm 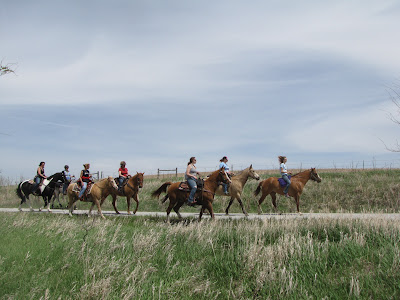 It was said that the 10th Annual Friday Before Mother’s Day blew. It was windy, cold and downright miserable and after a tree about fell on us, I really was thinking the 10th would be the last. But just like having a baby, the pain wears off and before long, it’s time to start planning the next ride. I decided to keep it simple; go back to the basics. No catered food. No golden horseshoes. Just horse and riders. Sack lunches; pot luck to follow. Yeah, I was pretty sure this would work. Oh, we might lose a few people, but it would still be a good ride. 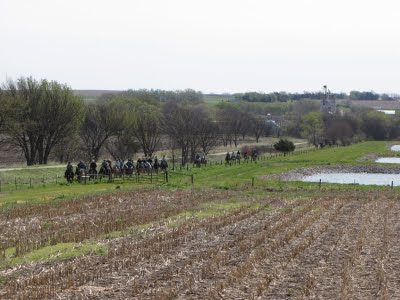 I pre-rode the Oak Creek Trail a few weeks before. Other than one downed tree, it looked good. The NRD took care of the tree and mowed the trail to perfection. The weather, believe it or not, was in our favor. Windy, but eighty degrees. Doable, very doable. The night before, I packed the trailer and John filled the water barrel to take to Loma for the riders. He wouldn’t be able to ride this year as he was in the middle of a job, but we’d be okay.

I loaded Windy a little after 8:00 AM and after stopping for coffee, I pulled into the trailhead shortly after. Before long, the trailers started pulling in. Friends, acquaintances, and lots of people I didn’t know. Everyone was smiles, what horses I was around seemed to be handling the crowds well and did I mention the weather? Beautiful. Windy caught sight of her trail buddy, Boomer, and started getting prancy at the trailer, so it was time to mount and get going. My friend, Kathy, as is tradition, lead the group out promptly at 10:00. 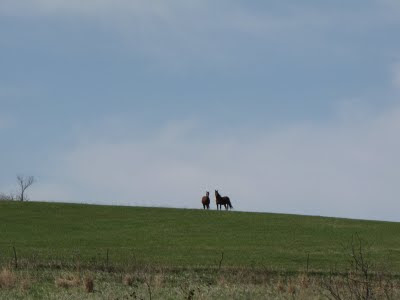 Up ahead, a plane coming in for a landing in Lincoln, seemed to hover over us. Two lone horses stood on the hill in a pasture watching the parade of riders. You could still smell a hint of the plum blossoms which just dropped days ago. A blue bird flew ahead of us for a spell before landing on a high tree. Whinnying was heard in the distance and laughing all around us. It took just over two hours to ride a little over 7 miles to Loma. 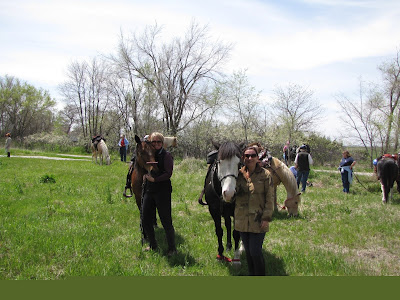 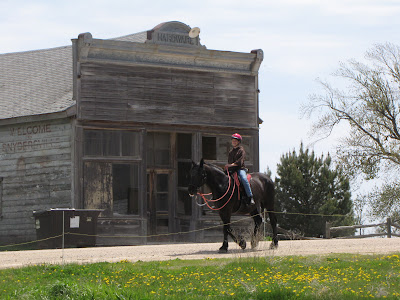 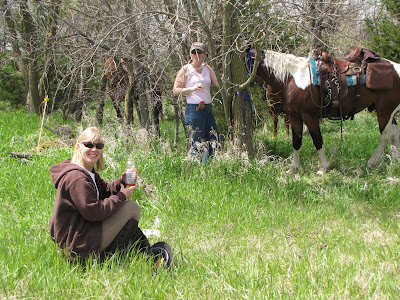 In Loma, I hobbled Windy next to Boomer and joined a few friends for a quick sandwich; then walked through the riders chatting with friends and meeting new people. The riders kept coming in. Finally, I got a text from my outrider who was counting riders going over that first bridge. He counted one hundred and forty one riders. Oh, my gosh, this was one of the biggest rides yet. Unbelievable. For those who have never been on this ride, you might think this number is way too many to make for a pleasant ride. For those who have been on the ride, you know that the riders are spread out so much that it doesn’t feel like 141 riders. I never would have dreamed there were that many riders on Friday morning.

I started out riding back with friends but started to slowly move ahead. Once I found a hole between riders, I moved Windy into a trot. She leveled out nicely and I laid the reins on her neck and moved into a two-point position enjoying the ride. When I would come upon riders, we would slow briefly asking if we could pass at a trot. Everyone obliged; one rider even asked if they could run with me. 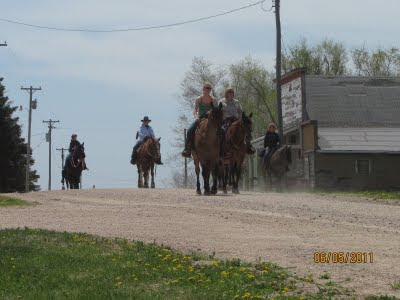 We traveled this way for about four miles, I’d guess, slowing if there was congestion on the bridges or tight spots. Two miles outside Valparaiso, I come upon my favorite couple riding alone. In their 70’s, this is what they do: they ride. We rode together for awhile until I heard the sirens go off in Valparaiso. That meant they were calling the volunteer fire department and EMTs. There was either a fire or a medical emergency. It wouldn’t be the first time medics were called on this ride. 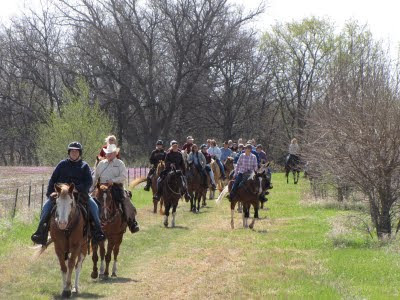 As I heard the ambulance coming toward the trail, I asked my friends if they would mind if I rode ahead and took off again at a trot. We rode into Valparaiso just a mile or so later. I found out an ambulance call was made as a rider was dizzy and could be suffering for dehydration and as a precaution, the medics were called. I was told later that she was hydrated and the ambulance brought her back to her trailer in town. We have had broken ribs and a broken ankle in previous rides; I am glad this one ended okay, so I was told. One of my safety riders did ask that I remind everyone that when an ambulance is called, riders should be dispatched to both intersections to direct the medics to the rider. Good tip for all rides.

The ride concluded with a potluck dinner at the trailers. Camp chairs, good food; sharing stories of the trail. I don’t know if this ride felt so good because last year’s ride was so miserable or if it truly was the best ride in eleven years. I am leaning toward the latter. When I loaded up Windy; only a handful of riders were left. We headed to Branched Oak Lake to meet my besties for a sundown ride and an overnighter. When I laid down in the trailer that night, I was reading all the positive notes on Facebook and felt really good about the day. No one missed having catered food; a good time was had by all. I fell asleep before I finished reading all the posts.

I’ve loaded some pictures into a Webshots album; some taken by me, some by others.

I want to thank you all for coming to the Friday Before Mother’s Day Ride 2011. Thank you to my friends for all their help and the safety riders for keeping a watchful eye. I hope you had as good of a time as I did. I’ll see you next year.
- May 07, 2011